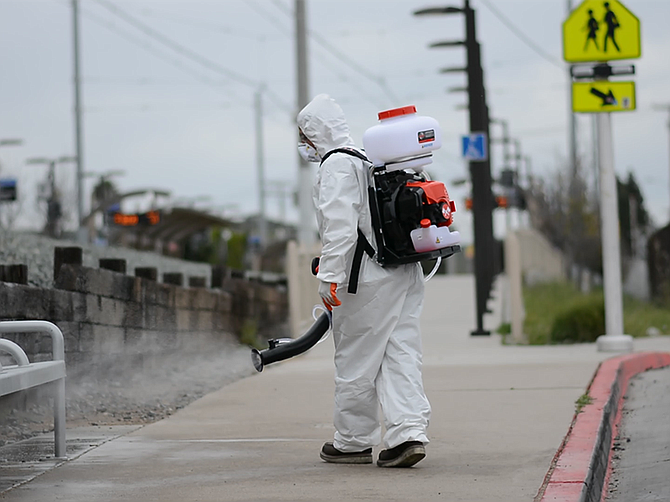 Photo courtesy of Tomahawk Power, LLC. Mist dusters, TMD14s, are being used to disinfect public areas, including the Dublin Airport in Ireland, according to Tomahawk.

Four weeks ago, Tomahawk Power LLC, a San Ysidro-based company that manufactures outdoor power equipment for the construction, agriculture and pest control industries, received its first coronavirus-related purchase. The order, said Tomahawk Power partner Lawrence Nora, was for 10 mist dusters, also known as TMD14, which he later learned are being used to disinfect the Dublin Airport in Ireland.

Since then, Nora has seen a surge in orders for the $300 sprayers, including a second order from Ireland and a few dozen purchases from Canada, he said. Now, despite its construction product line — its main revenue stream — slowing down because of the COVID-19 pandemic, Nora predicts Tomahawk will still meet its revenue projections for 2020 due to the uptick in sales of its mist dusters.

“It kind of first happened when Europe got its first scare three weeks ago,” said 31-year-old Nora, originally from Chicago, Ill. “Someone from Ireland called saying they wanted to buy a half pallet of the foggers and have it shipped by air… Five days later, he called again and asked us to ship a full pallet by air. We found out the loads were going to the airport in Dublin to be used to spray around the facility with hydrogen peroxide, peracetic acid and a mixture of bleach and water.”

That kicked off the latest wave of interest in the mist blowers. The product was also a hot item during the Zika outbreak of 2015, said Nora. The sprayers look like backpack-laden leaf blowers and were originally intended for agricultural use, applying pesticides and fertilizer. The foggers weigh about 25 pounds each, can carry 14 liters of liquid and have a reach of about 40 feet.

Domestically, Tomahawk Power has been gaining traction, too, said Nora. Some of its clients include Western Exterminator in San Marcos and TruGreen, a lawn care maintenance company based in Tennessee, he said. Additionally, Tomahawk Power distributors such as Fastenal, HD Supply White Cap and Univar Solutions have accounts with government offices such as the County of San Diego, the City of San Diego and other municipalities that may also use the foggers, he said.

Jason Payne, president of Payne Pest Management in San Diego, said he understands the growth in interest in the foggers considering the current coronavirus spread.

“From my knowledge in pest control, this would be a good idea to disinfect a public area if dispensed properly,” he said. “A power sprayer would probably not be the best option to use to disinfect public areas because it’s harder to control and covers a wide area such as a residential yard. I would say a mister would work better because you have better control of your target areas and the droplet size that the mister releases would be better suited for this type of application.”

Tomahawk Power assembles most of its products in the United States, said Nora, who started the company with a loan from his family. It sources its parts from the likes of Japan, Europe, Czech Republic and Mexico, he said. The company has a 7,000 square foot warehouse down in San Ysidro and a 4,000 square foot facility in Gary, Indiana, said Nora. The San Diego location handles all West Coast, Canada and Mexico fulfillments, while the Gary location services the East Coast, he said.

Nora said he sort of fell into the power equipment industry. After graduating from the University of San Francisco with a degree in business, he decided to go to China to learn the language. There, he worked with a friend’s uncle, who was doing a project with Honda, he said, and that is when his affinity for the industry came about.

“It was pretty neat,” said Nora. “He was a technical guy and I was working on packaging… I worked under a 20-year veteran at Honda and learned all about quality control.”

In 2012, Nora launched Tomahawk Power with a limited product line, including generators and water pumps. The economy was still suffering a bit from the recession at the time, he said, so there was room for a company like his to step in. He said Tomahawk focused on a niche category that fit nicely between Caterpillar Inc., which makes bigger, mostly ride-on equipment for the construction industry, and Dewalt, a construction equipment manufacturer that focuses on smaller tools like handheld drills.

Tomahawk, which mostly concentrates on medium-sized apparatus, started servicing only B2B at first, like industrial suppliers and distributors, said Nora. But now, Tomahawk also does online sales, he said. And, while Multiquip Inc., also from California, and Germany-based Wacker Neuson are both competitors, Nora said Tomahawk is pretty much the largest outdoor equipment manufacturer in the U.S.

By the fall of 2020, Nora plans to double the size of Tomahawk Power’s warehouse and consolidate its two operations into one location. Not long after that, he will focus on expanding his reach in the East Coast, he said, and — it is hoped — become a $12 million company in the next three years… this time, no thanks to a pandemic.