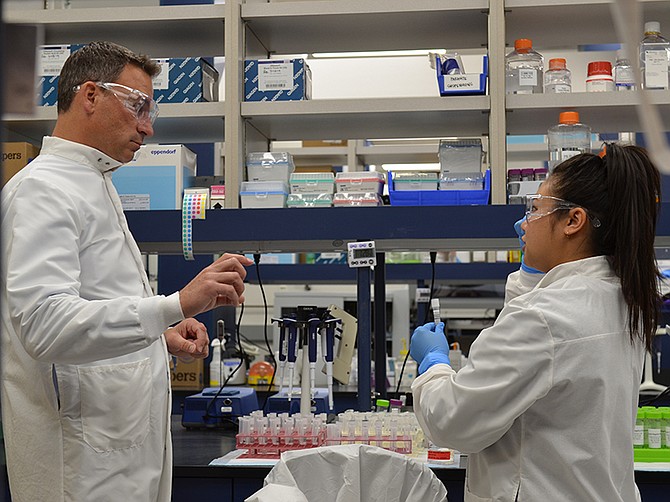 Photo courtesy of Hologic. Hologic’s Kevin Thornal (left) and Julie Tran in the company’s lab. Hologic is increasing production of its test that detects SARS-CoV-2, the virus that causes COVID-19.

Lab suppliers Hologic and Thermo Fisher Scientific are ramping up production of coronavirus tests, while others locally are working on rapid technology to tell if someone has the virus.

The efforts follow a widespread issue: patients with COVID-19 symptoms have turned up at hospitals and clinics, only to be denied testing because of shortages.

Hologic won emergency approval for its coronavirus test kit that can deliver results in three hours, the company said March 16. By April, the company expects to produce nearly 600,000 of the tests every month.

Massachusetts-based Hologic manufactures the kit assays in San Diego, where it has 900 employees.

“As soon as the outbreak started, our diverse team of scientists and engineers began developing a new, highly accurate test,” said Steve MacMillan, CEO of Hologic.

Hospitals and labs can run the test on Hologic’s Panther Fusion platform, which in a 24-hour span can process up to 1,150 coronavirus tests.

Such fully-automated technology holds the greatest promise amid the testing crunch. So said analyst Puneet Souda with SVB Leerink.

“It’s important to understand what a manual test can do versus fully-automated systems,” Souda said.

While companies like Hologic are upping test production, Souda and others say it may not be enough to meet demand for a while. One factor: a dearth of reagents — chemicals needed to prepare samples for testing.

“Though we remain optimistic about more testing capacity and instruments coming online, we remain cautious about the reagent capacity needed for these instruments as we believe rationing of the reagents is a likely near-term scenario over the next few weeks,” Souda said.

The U.S. Food and Drug Administration said it’s watching the issue, and it posted a FAQ page that lists possible testing workarounds.

Meanwhile, the agency recently sought to speed up testing by allowing certified labs to use new coronavirus tests while they undergo regulatory review. Those with emergency authorization include Hologic, Swiss diagnostics maker Roche and Massachusetts-based Thermo Fisher.

On March 16, Thermo Fisher said in April it expects to produce 5 million high-speed COVID-19 tests per week. Some of the company’s 2,000 employees in Carlsbad are involved, but the Massachusetts-based company did not return requests for comment on what role they’re playing.

So far, the company has shipped tests to 200 labs and clinics.

Wider — and faster — testing would illuminate who is sick and needs to be quarantined, slowing the spread of the virus.

A smaller company, San Diego’s Mesa Biotech, is working on a handheld COVID-19 test that aims to return results in 30 minutes. The idea: Bypass the practice of shipping tests to reference labs.

The concept echoes the company’s portable flu test that won regulatory approval in 2018. That test begins with a nasal swab. Sample-filled cassettes slot into Mesa’s portable docking station, and after a half-hour, a solid line on the screen indicates whether a person has the flu.

The company submitted for test approval under the FDA’s emergency rules.

“Mesa’s platform was specifically designed for use outside the lab to enable rapid responses to global pandemics, such as COVID-19,” said Hong Cai, Mesa’s CEO, in a statement.

UC San Diego Health deployed the technology to test up to 20 patients a day, with plans to increase capacity, according to the health system. The turnaround time: eight hours, though the health system is working to shave off two hours.