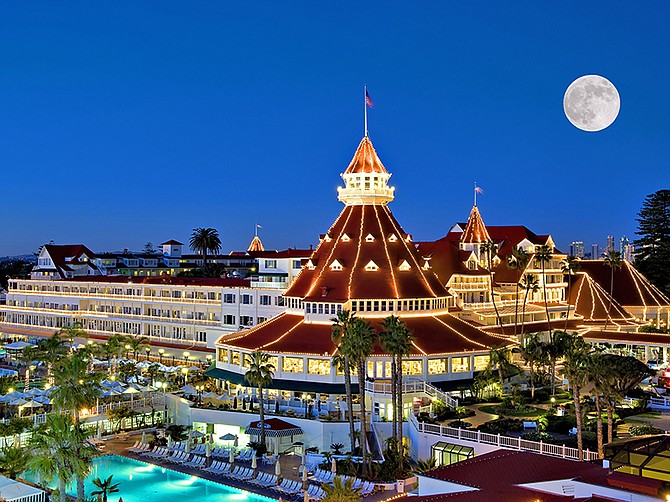 As of the end of Q4 2019, Hilton had a total of 42 Hilton branded properties in San Diego and 5,457 team members around the county. Annually, the company, which has six managed properties and 36 franchises locally, pays $67 million in estimated state sales and occupancy taxes to the city. And, for every $100 its hotel guests spend on lodging, an additional $222 is spent at the destination, according to the company.

Now, as San Diego continues to promote its status as a top tourism and hospitality destination in the country — San Diego hosts nearly 35.1 million visitors each year, which spend about $11.6 billion annually, according to the San Diego Tourism Authority — Hilton, with company-wide revenue of $9.5 billion in 2019, plans to more aggressively grow its stake in —and impact on —the local economy. This includes the addition of at least 19 hotels, which are currently in the pipeline and will add about 2,500 rooms to the already existing 55,000 hotel rooms in the region, a Hilton spokesperson said.

“San Diego is a year-round destination for travelers from all parts of the United States, Mexico, Canada and other locations,” he said, clarifying that Hilton no longer own hotels and relies solely on the local development community to partner with it in a franchise or managed hotel relationship. “The weather and the beautiful setting are a few of the primary reasons for this. San Diego is a terrific group market served by one of the top convention centers in the country. Additionally, the leisure and transient business is very robust, especially in the summer. When you combine these factors, you create a very strong hotel performance across all sectors.”

Carl Winston, director of San Diego State University’s L. Robert Payne School of Hospitality and Tourism Management, said Hilton is selling franchises in San Diego because it is simply a good town for it.

“It isn’t Hilton necessarily driving this, but local developers that are seeing San Diego as the best market and selecting the right hotel partners to build with,” he said, adding that Hilton does a good job at selling its brand. “Marriott is the big boy in town, with over 50 hotels locally, but Hilton is making a move… I always think of it this way… brands are basically a promise… when travelers come to San Diego, whether on a family vacation or a convention, they want to know what they are getting. It’s all about branding.”

Winston added that it is appealing to developers to work with established brands like Hilton for better chances of receiving a loan from banks for their lodging endeavors. He said, it is more beneficial from a loan standpoint for a developer to say to a bank, “I am opening up a Hilton hotel,” for example, than not. Hilton began franchising in 1965, becoming the first upscale lodging company to do so, said Spivak.

Powell said much like Carte, boutique hotels, which have become popular again in recent years, are a heavy focus for the company both locally and nationally.

“Boutiques have certainly become popular in recent years. They spawned the growth of our collection brands Tapestry Collection by Hilton and Curio Collection by Hilton,” he said. “Each of these brands represents upscale hotels and resorts with unique character and personality… The demands of the market also cast a light on a need for lifestyle-oriented brands such as Canopy by Hilton and our newest brand as of January of this year, Tempo by Hilton.”

All four brands mentioned are either already in the San Diego development pipeline or will be soon, he said.

According to data, Hilton’s boutique hotel partnerships are right on track with growing trends in the overall hotel industry. A 2018 report by Hotel News Now, an online news source, states the boutique hotel segment increased supply by 7% in 2017, compared with 1.8% increase in supply for all U.S. hotels. A 2018 report by CBRE Hotels Americas Research, which specializes in the lodging industry, states that, while boutique hotels comprised of just 3.2% of the total U.S. lodging supply in 2017, boutique projects represented 17.8% of the rooms in development by June 2018.

The addition of more hotels around the city means more jobs created for the local community, said Ashley Zimmerman, the military programs associate at Hilton. In 2013, the company launched the “Operation Opportunity” program with a goal of hiring 10,000 veterans, military spouses and caregivers within a couple of years. So far, she said, the company has hired 30,000 veterans through the initiative and now hopes to employ an additional 20,000 by the end of 2025.

Through programs like this, Hilton increased its San Diego employee head count by 7% in 2019, said Zimmerman, with 2% of positions still open. And, because San Diego is considered a top military town — and with Hilton’s focus on growing its presence in the city in mind — Zimmerman relocated to San Diego just last year, joining her husband who is stationed here, she said.

“Supporting the military has been embedded in the Hilton culture the last 100 years,” she said, “beginning with the founder, Conrad Hilton, who was (in the )military himself).”

Hilton has been making its mark in the city in other ways as well. In 2017, Hotel del Coronado, a national historic landmark in San Diego, became a Hilton hotel. And, just last year, the Hilton San Diego Bayfront hotel wrapped up a $23 million renovation, according to the company, that introduced the connected room technology, which allows guests to manage their stay from their mobile devices.