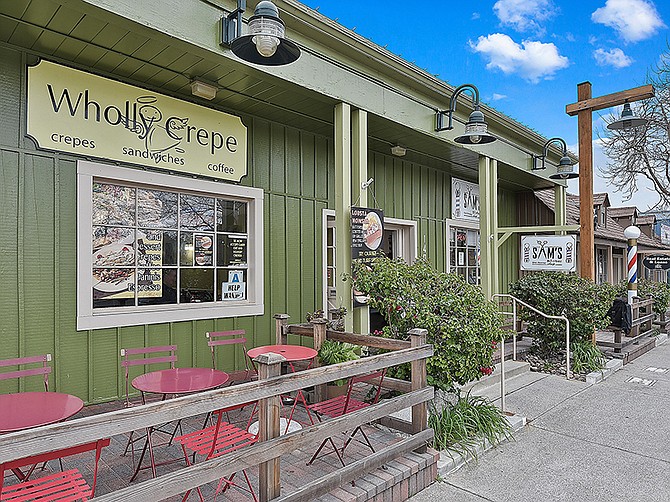 When Old Poway Village went up for sale, Mark Hoekstra jumped at the chance to transform what he saw as a neglected, aging shopping center into a thriving marketplace.

“It was a tired, sleepy center,” said Hoekstra, a managing director of Intersection, a development firm based in downtown San Diego.

The 35,191 square-foot center was familiar territory for Hoekstra, who attended Midland Elementary School diagonally across the street and the nearby Twin Peaks Middle School.

“I grew up all over San Diego, but I grew up for a short time in Poway,” said Hoekstra, who is the grandson of San Diego developer Ernie Hahn.

“To show how much Poway changed, when I lived here, I rode my horse to school,” said Hoekstra, who lives on an 11-acre ranch in Valley Center. “I still embrace that lifestyle and have all my life.”

‘City in the Country’

Poway calls itself “the city in the country,” and Old Poway Village and its neighbors play up the country feel.

Intersection acquired the shopping center in May 2017 for $6.9 million and is spending $1.2 million sprucing it up.

Primarily, that meant dramatically shifting the tenant mix, which had been a mish-mash of offices and retail shops — some of which had limited hours.

One store was open only one day a week, Hoekstra said.

“We needed to create a property that was experiential, that was Amazon and internet resistant,” Hoekstra said. “We didn’t want to be a typical shopping center.”

With that in mind, Hoekstra set out to recruit Poway artisans and small businesses to move in, going so far as to recruit at least one — Wholly Crepe — from the weekend Poway Farmers Market across the street.

“Our vision was to create a new district for Poway. “ I didn’t want to buy it (the center) just to jack up rents and turn it,” Hoekstra said. “I wanted to create a center where we provided different options.”

Of the 22 tenants that leased space in Old Poway Village, only five remain, Hoekstra said, and nearly all of the space has been leased.

Among the first to move into the renovated center was Debbora Childress, owner of Ms. Debbora’s School of Dance.

Childress said she liked Old Poway Village because “it felt like home.”

“It’s just so special. It’s just lovely,” Childress said. “There’s nothing like it.”

Jeremy George, owner of Smokin J’s BBQ opened his shop in Old Poway Village in December. He said he was drawn to “the kind of country style of Old Poway.”

“It kind of reminded us of Virginia, where I’m from, my brother and my girlfriend are from,” George said.

Other tenants include everything from the San Diego Music Academy, Poway Pilates and Yauvana Yoga and Float to Filhart Beef, Mission Cellars winery, and Bark and Collar pet grooming.

Before Intersection acquired the center, the Farmers Market was viewed as an inconvenience.

Hoekstra has taken the opposite tact, inviting Farmers Market patrons to park in Old Poway Village and redoing a patio where they can rest or munch on goodies they bought at the market.

He figures the added exposure will bring more business to the shopping center.

“It helps the center because allowing people to park allows people to walk through and see the tenants we have,” Hoekstra said. “The Farmers Market attracts people from all over San Diego.”

The park is a popular wedding venue and Hoekstra figures the center is an ideal spot for wedding rehearsal dinners.

Intersection gutted the interiors of center stores, leaving it to tenants to redo them as they’d like, but little has changed on the exterior.

“It looked fairly similar to what it looks like now. We haven’t done a whole lot to change the appearance of it,” Hoekstra said. “We’re obviously doing a lot of deferred maintenance.”

The overall look of the center had to stay with a Western theme under zoning regulations.

“It’s a great addition to Poway in general and a perfect expansion of the Old Poway area. I’m excited about it,” said Poway Mayor Steve Vaus. “It’s really kind of a combination of the new and the old, artisans and food and other items. It’s a great tapestry down there, drawing people from all over.”

The project was named the best retail project of 2019 by the San Diego Business Journal at its annual Commercial Real Estate awards.

Comparing the renewed Old Poway Village with what it was, Hoekstra said “It’s something at the end of the day that you feel proud of because everybody said it couldn’t be done.