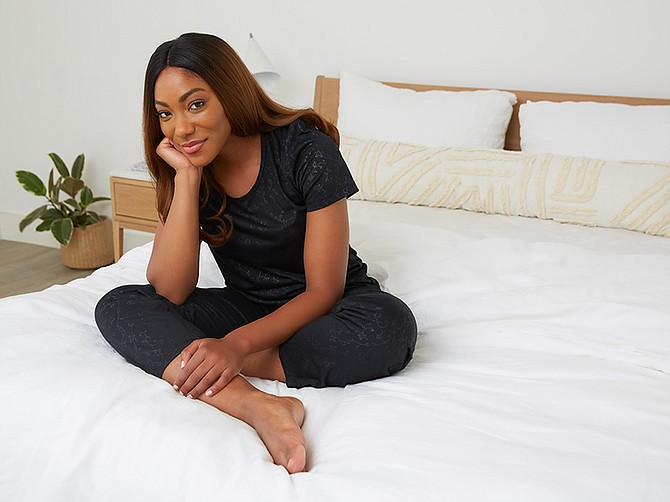 Photo courtesy of Cool-Jams Inc. Cool-Jams Inc., a pajamas and bedding brand that uses a proprietary poly microfiber material, was founded in 2007.

When Anita Mahaffey, a San Diego-based, self-proclaimed serial entrepreneur, discovered a moisture-wicking and fast-drying fabric while at an overseas textile factory she is a partner in, she immediately knew she had a new business in her hands.

In 2007, she founded and self-funded Cool-Jams Inc., a pajamas and bedding brand that uses that very proprietary poly microfiber material. Now, the company, headquartered in Scripps Ranch, is projected to reach between $2.5 million and $3 million in revenue by the end of 2020, she said.

“I was going through menopause at the time and thought, ‘this would make for a great pair of pajamas’,” said Mahaffey, who grew up in Turlock. She graduated from the University of San Diego in 1980 with a degree in business administration and an emphasis in marketing. “I made a pair of pajamas with the fabric and knew this could be a solution to night sweats and overheating… I did focus groups and product testing and had people wear the pajamas to see what they thought of them. Everyone was super positive. We took that germ of an idea and created Cool-Jams.”

The fabric, which came across Mahaffey’s desk as a possible use for T-shirts, not only wicks moisture and dries quickly, it also keeps the body a couple of degrees cooler than most, she said. Additionally, the material has a natural antimicrobial treatment that allows the garment to stay fresh and odor free for a few days, she said. The fabric is not patented, Mahaffey said, because anyone can take it and tweak it and make it their own. So, instead, the formula is locked up in a safe that a limited number of people have access to, she said.

The poly microfiber was first lab-tested and then slightly changed in order to make it soft enough for sleepwear, said Mahaffey. Color schemes and prints were added to expand the collection, which was then followed by a travel line (because the fabric is also lightweight, compact and wrinkle resistant, said Mahaffey) and then a bedding collection made of Bamboo.

For production, Cool-Jams works with a partner in Taiwan, said Mahaffey, which delivers via containers to its fulfillment center in St. Louis, Missouri. On the bedding side, the company works with two warehouses, she said — one in Colorado and another in Washington state. Mahaffey said Cool-Jams also sells on its website as well as Amazon and ships within the hour of receiving any order. It sells on its own wholesale portal as well, she said, where retailers can go and make purchases once approved by the company.

“We find it much more efficient to work directly with consumers,” said Mahaffey, who previously worked as a product manager with Bumble Bee Seafood and also ran a knitted sweater company at some point. “Formerly, I did a lot of programs with large retailers through one of my previous businesses, a private label program, and it’s a little tricky because you are working on slim margins when you work with large department stores… so, we sell wholesale through our wholesale portal instead. We do B2C and B2B.”

Mahaffey said 50% of the company’s business takes place during the last quarter of the year because it is a holiday period. She also said, while Cool-Jams sells both men and women’s pajamas, its target audience is females between the ages of 35-65. To do so, the company markets via various channels, said Mahaffey, including Facebook, Amazon, Instagram, Pinterest, and Youtube. And, then of course, through public relations services, she said, adding that word-of-mouth has also helped grow the company.

While there are no other companies in San Diego that Mahaffey considers a competitor (“there are very few textiles companies in S.D. altogether,” she said), Florida-headquartered brand Soma does make a Cool Nights Pajamas that is similar, except it is made out of Bamboo and doesn’t keep the wearer as cool as Cool-Jams products do, she said.

“Ours is specifically developed for keeping you cooler and for moisture management,” she said. “In testing, our sleepwear has outperformed anyone else in that segment for sleep enhancing product in sleepwear. We are kind of in a class of our own.”

Mahaffey said while she has been approached numerous times the last handful of years by potential suitors wanting to either buy the proprietary fabric from Cool-Jams or to acquire the company altogether, she isn’t quite ready yet. She said there will be a time she will consider a sale, but the company is still on an upward growth trajectory and still has a few more goals to meet.

One of those immediate goals being increasing its overseas sales, said Mahaffey. Currently, Cool-Jams sells in about 150 countries, with the majority of its business coming from the U.S. and Canada, she said. But, her plan is to expand the company’s overseas volume significantly in the near future.