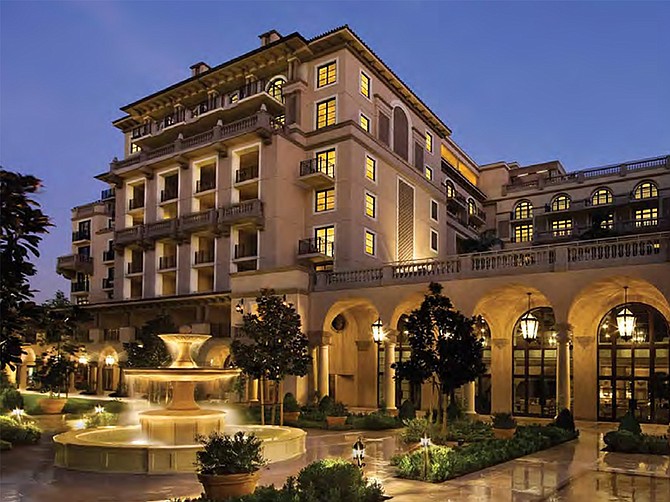 San Diego’s hotel industry has been rolling along for the past decade. But how long will the good times last?

The industry could be in for a rough night. “The clouds are on the horizon,” he said.

Reay recently released Atlas’ annual 2019 Year-End California Hotel Sales Survey, which covers hotel property sales region by region in the state and touches upon the economics of the industry in the process.

Overall 2019 was a solid year for hotel property sales, the report from the Irvine-based Atlas notes. Sales based on the price per room dipped 2.6 percent compared with 2018.

“It’s obviously still a robust market,” he said. “But the question on a lot of owners’ minds is this: If we’re not at the peak, how close are we to it?” Reay said.

Some of the other findings of Reay’s annual report:

• Atlas’ annual survey found that total sales for San Diego hotel properties dropped to 20 from 27 in 2019, through the dollar amount jumped 82%.

• The most expensive sale of the year was the $189 million paid for the 438-room Hyatt Regency Mission Bay in San Diego.

• And the largest property transaction was the sale of the 1,053-room Sheraton San Diego Hotel & Marina, located near San Diego International Airport.

The 30-room Pantai Inn in La Jolla enjoyed the highest price per room at $746,667, much higher than the $185,156 average for the county. In comparison, the Montage Beverly Hills set a record price of more than $2 million per room.

In an interview with the San Diego Business Journal, Reay noted that hotel revenues are flattening and now in a decline after 10 years of exceptional growth. That decline might have an impact on future sales numbers.

He said among the factors behind that decline is that current owners and operators are coping with increases in operating costs.

“Expenses are going up, including the No. 1 expense labor,” Reay said. “What we saw it in the restaurant business we’re now seeing it in the hotel business — employee wages going up to $15 an hour.”

“If you’re not able to pass that on and increase revenue, then what happens?” he asked. “Well, you’re operating income declines. And when that declines, the value of your property declines.”

Other factors that impact pricing come into play, too, he said.

A factor on the upside is the extremely low interest rates paid for hotel mortgages. Those low rates have helped offset labor increases and other rising costs.

“The interest rates on loans are getting done today at rates I have never seen in 25 years of doing this business,” he said. “There are hotel loans now with commercial mortgage backed securities (CMBS) that are being done in the mid to low threes. I am not sure you can even get a home loan at that rate.”

And competition from other forms of lodging such as Airbnb and VRBO hasn’t had much of an impact. Despite the guest stay competition, the revenue for an average hotel room is still climbing in markets throughout the state, including San Diego.

“When we came out of the last recession 2010-2011, we could hardly give hotels away,” he said. “Buyers were shying away from the hotel business, as well as lenders. The existing product was selling at a fraction of the replacement costs, and it didn’t make sense to build”

He said now developers are hard pressed to keep pace with growing demand for rooms.

Reay said the last factor in hotel sales prices is the arrival of a new group of hotel buyers — apartment building owners. They’ve helped to push the price of hotel transaction prices statewide.

The recent advent of statewide rent control, which limits revenue and hence profits, has flushed out building owners looking for higher profits on their investments, he said.

“The apartment market is really on fire, but the cap rates that those properties are selling for are so low that the owners are looking at other product types,” he said. “So, they’re coming into the hotel market.”

“Rent Control limits what can charge for their product,” Reay also said. “Anytime you have government intervention in terms of the free market owner are going to exit that and get into areas where they don’t have restrictions.”

Though California is a challenging place to build new properties, with obstacles ranging from the whims of the California Coastal Commission to opposition from local neighbors, there is a never-ending (supply) of buyers scouring the market for hotel properties.

“People understand that it’s tough to build in this marketplace. But there remains a lot of interest in California,” he said.

Local hotelier Robert Rauch, chief executive officer at San Diego-based RAR Hospitality, follows the industry closely. He has his own thoughts about conditions ahead in 2020 for both hotel sales and overall operations.

“Owners think their property is worth more than what it was in 2019 and buyers think it is worth less because a recession is possible after 10 straight years of growth,” he said.

But prices will remain strong, given the positive conditions for operating a hotel in the region.

Nationally growth will be lackluster, but San Diego will buck the trend. Room occupancy will run about 77 percent, thanks to the weather and the beaches.

He also had some good news concerning the potential Coronavirus pandemic threatening the globe.

“Since our business from China is limited and we have most of our leisure business from “drive” markets like Phoenix and Southern California, any impacts from a downturn caused by coronavirus or other event will hit us less hard than most other destinations.”