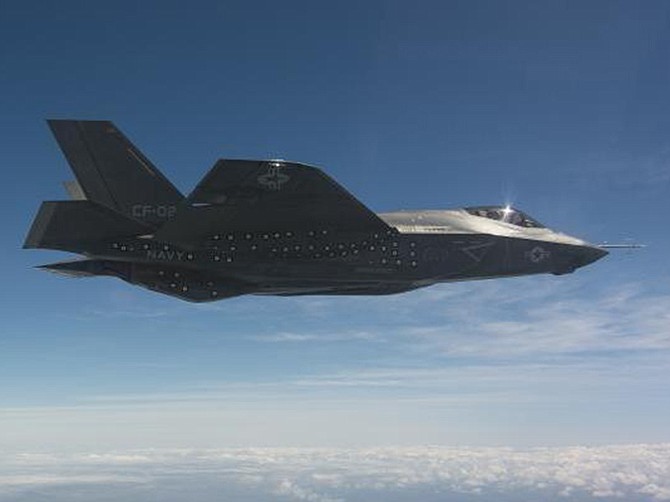 The following are selected defense contracts awarded to San Diego County companies in February and March. They have been announced by the U.S. Department of Defense or by the contractor itself.

Some $55 million worth of work on a critical electronics system for the F-35 Lightning II fighter aircraft is headed to San Diego.

The U.S. Navy awarded a contract modification to Lockheed Martin Corp. on Feb. 28. It includes $55 million of work to be performed in San Diego through the summer of 2024. Under the deal, the Pentagon plans to establish organic level repair capabilities for the F-35’s Communications, Navigation and Information system, called CNI for short.

It was not immediately clear where the repairs will take place.

The Naval Air Systems Command of Patuxent River, Maryland, awarded the deal. The total value of the contract is $141.7 million. Some 39% of the work will flow to San Diego. Other significant work under the contract will be performed in Fort Worth, Texas (home base for the aircraft program); Melbourne, Florida; and Genoa, Italy.

Lockheed Martin just delivered its 500th F-35 to the U.S. Air Force. In January, the business said it expects to produce more than 3,000 for the U.S. military and its allies.

The contractor is making three versions of the jet. The Air Force version takes off and lands on a conventional runway. The Navy version is optimized for landing on aircraft carriers. The Marine Corps version is able to land vertically. As such it is called a STOVL, or short takeoff vertical landing, aircraft.

The U.S. Army awarded Rore Inc. a $17.2 contract to build a new jet fuel complex at the Air National Guard Base at the Fresno-Yosemite International Airport. The construction will include vertical storage tanks, a pump shelter, truck fill stands, offloads and refueler truck parking. Work is expected to be complete by February 2022. Bids were solicited on the internet with three bids received. The U.S. Army Corps of Engineers in Sacramento awarded the deal, announced on Feb. 28. Rore has its headquarters in University City.

PERC Water Corp., a small business based in Costa Mesa, received a five-year, $17.2 million award for work at Marine Corps Base Camp Pendleton, in San Diego County. Under the deal, PERC employees will operate and maintain the southern and northern tertiary sewage treatment plants at the sprawling military base. PERC will oversee wastewater, custodial, pest control, integrated solid waste management, grounds maintenance and landscaping. The Naval Facilities Engineering Command, San Diego awarded the deal, announced on the SAM.gov website. There were two bidders.

In some circumstances, small drones can be used as weapons. Citadel Defense of National City said on March 3 that it received $9.2 million in orders from an unspecified customer for its counter-drone electronics technology. Citadel makes the Titan C-UAS system, which disrupts radio signals controlling small drones. Citadel said its technology will be used to protect high-value assets in urban, rural and maritime environments.

“Drones are an asymmetric threat that require unprecedented speed for innovation. Citadel’s AI [artificial intelligence] capabilities and responsiveness give customers a cost-effective option that addresses a very large portion of the sUAS [small unmanned aircraft system] threat,” said Christopher Williams, CEO of Citadel Defense, in a statement distributed by the company. “Strong war-fighter references and combat-proven results over the last two years helped secure this order.”

Citadel’s electronics use artificial intelligence and deep learning to detect radio frequencies. The business said its approach is superior to competing counter-UAS solutions, which use library scanning methods and demodulation.

The U.S. Navy awarded RQ Construction LLC of Carlsbad an $8.6 million contract modification to build its Mariner Skills Training Center at Naval Station Norfolk. Under the deal, RQ will provide construction services for site work, rough grade, pile caps and grade beams. Work is expected to be completed by August 2021. The contract was competitively procured with six proposals. The Naval Facilities Engineering Command Mid-Atlantic of Norfolk, Virginia awarded the deal, announced on Feb. 28.