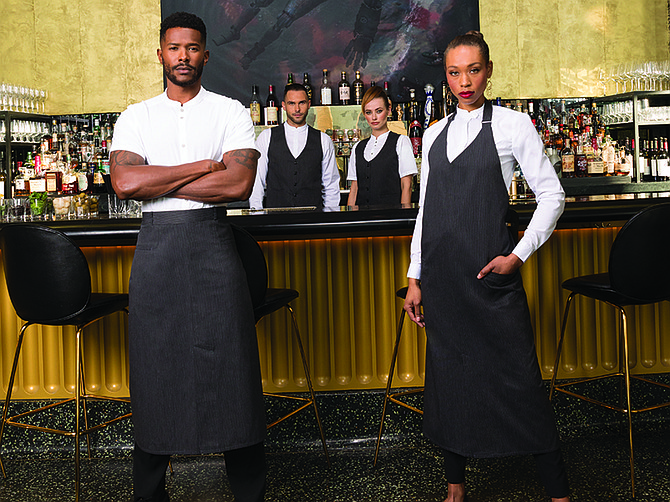 Chef Works Inc., a Poway-based company that makes culinary and hospitality apparel, operates in over 90 countries and employs 220 people in the county (and an additional 130 around the world). According to a report by French newspaper, Vosges Matin, Chef Works has an annual revenue of $110 million (the privately held, family-owned-and-operated company wouldn’t confirm that figure).

And, the lifestyle brand with a focus in the culinary and hospitality industry continues to innovate and grow.

Last month, Chef Works, headquartered in Poway, announced it acquired Bragard Group SAS, another culinary apparel brand out of Europe and one of its competitors, for an undisclosed amount. And, just a few days before this issue went to press, the company was set to launch its new “Contemporary Collection”, a line focused on the hospitality industry including the hotels, spas, front desk and valet segments; as well as expanded its “Urban Collection,” which features street-inspired designs.

“In total, we’re launching more than 40 new garments with exclusive cuts for women and men and thousands of style and color combinations,” said Neil Gross, Chef Works’ CEO. “In the coming months, we’ll be launching a sustainable line of apparel and our goal is to be 100% sustainable in five years.”

Founded in 1993 by Dale Gross, Neil Gross’ brother, Chef Works was started when the Gross family immigrated to the United States from South Africa in the early 1990s. The siblings immediately noticed a marketplace that was not only underserved, but was lacking creativity and style, said Neil Gross. The family had a history in the uniform industry and so, the brothers and sisters got together and started procuring small shipments of chef coats and selling them, he said.

“We saw the celebrity chef concept taking shape and anticipated the need for more than just a standard, white chef coat,” he said. “Our vision was to provide the culinary industry with apparel that was comfortable, fashionable and efficient.”

Amanda Stuckey, vice president of marketing at Chef Works, said part of what makes the business model work is that the company not only sells to other businesses, but also through distributorship. Meaning, Chef Works manufactures and distributes, the latter being just one of its models, she said, adding that all of the Chef Works designs are proprietary to the company. This includes chef coats, aprons, pants, hats and other accessories like vests and suspenders, Stuckey said, and covers the back of the house (kitchen) and the front of the house (servers, for example).

“The company is constantly garnering customer feedback and input on the ground level to evaluate our product offerings, ensure we stay ahead of the game and make sure our designs are hybrids,” she said. “(Now), we are expanding deeper into the hospitality region, like receptions and valet. Those positions haven’t normally been present from a dominant standpoint (for the company)… (But), as we’ve evolved over the years, especially the past five years, we’ve taken and adopted from a design standpoint and want the rest to be transferable.”

Miro Copic, marketing professor at San Diego State University, said it is important to acknowledge that Chef Works not only services restaurants, but the hospitality industry as a whole.

“I think it is important to point out that the company is focusing on a broader side of the industry and trying to create degrees of relative fashion, which makes it more interesting,” he said. “It’s a positioning that allows restaurants to be more individual, more thoughtful and create their own image

… They are trying to kind of professionalize the industry as well as create a fashion sense so … there is a better identity related to the restaurant, chain or establishment and its employees. And, that is just one small piece. If I have to wear a uniform at work, hopefully it is attractive and elevates my status than that of just an order-taker.”

Copic also commends the company’s recent move in acquiring Bragard, which he said will give the U.S-based Chef Works a footprint both nationally and in Europe. Acquiring an established company that already has a revenue base allows Chef Works to grow rather than reinvent the wheel overseas, he said, which can be a drain on investment that could be used to further grow sales locally instead.

“…They get immediate know-how, a footprint and amount of sales where they can transfer some of their know-how plus what that company has in Europe and maybe speed up sales,” said Copic. “Folks in many areas of Europe tend to have a style that is a little more formal. Doing more contemporary type of fashion (there) might be an interesting opportunity.”

Both Traditional And Edgy

Today, Chef Works makes apparel that ranges from traditional, like chef coats and aprons (“because we know there are chefs who still appreciate a clean, well-made white chef coat,” said Gross), to street-inspired and edgy. This may be in the form of a pant or a shirt, hats and accessories, he said, and can service not just front and back of the house of all kinds of restaurants, from James Beard honorees and Michelin-starred restaurants to family diners, but also bars, assisted living facilities, high-end cinemas, casinos, hotels, university dining services and stadium venues, including Petco Park, he said.

No matter the industry it is serving, Gross said innovation is at the forefront of every design at Chef Works.

“We have a wide range of products, our apparel is functional, fashionable and loaded with details that make chef, servers and hospitality workers look good and feel good when they’re working,” said Gross. “That includes subtle details, like an extra pocket or a back-collar apron holder. Or it could be innovative textures and fabrics.”

The company’s Berkeley Apron, for example, has more than 320 combination styles with interchangeable apron straps, he said. Gross also said Chef Works has an apparel line specifically made for women, instead of putting a “unisex” label on, essentially, a coat made for men in a smaller size.

Some of Chef Works top selling items include the Montreal Chef Coat, the Hartford Chef Coat, the Springfield Chef Coat and the Portland Chef’s Bib Apron, said Gross. He said the company has a very “diverse supply chain” that produces in four regions around the world at any given time. Because of this, he said, Chef Works has been able to weather the storm on some of the economic challenges the apparel industry has faced over the last few years. This includes the recent coronavirus outbreak, said Stuckey. She adds that because of the diversified supply chain, Chef Works is able to mitigate risk and shift supply chain production between partners, which allows the company to keep manufacturing and supplying customers with their orders.

This model has helped Chef Works when it comes down to facing economic woes and ever-changing industry trends, said Gross.

We’ve faced many of the same challenges as every other growing company,” he said, “we’ve needed to stay flexible to be able to adjust to whatever is happening without compromising our company ethos of quality products and superior customer service.”

In fact, this is exactly what Gross believes sets Chef Works apart: its unrivaled quality and customer service. He said the company has “hundreds” of products and “thousands” of combinations that work for almost every aspect of the culinary and hospitality industry. Chef Works also has in-house embroidery, Gross said, which cuts down on cost and shipping time for customers, who are, at the end of it all, a main priority.

“The lifeblood of our business is obviously our customers,” he said. “We pride ourselves on understanding the lifestyle of the industry and we’ve been able to connect with our customers with a style and language that speaks to them.”