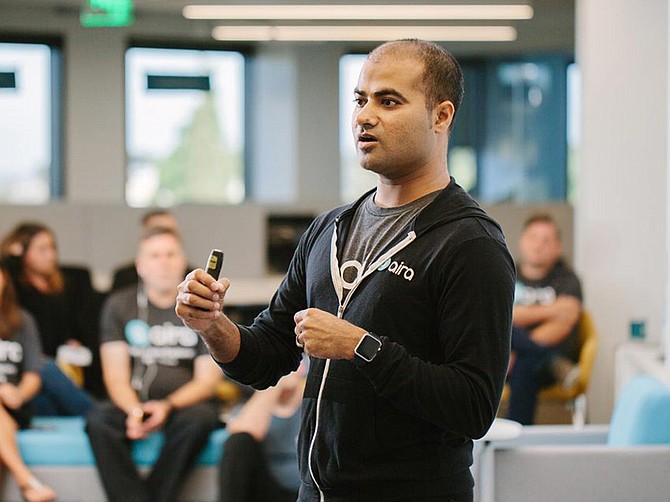 Luther Inc., the latest venture from local entrepreneur Suman Kanuganti announced it closed a friends and family round to build his memory tech company. Terms of the amount have not been disclosed. Serial entrepreneur, Kanuganti shared the news with the San Diego Business Journal on Feb. 28.

His first company, Aira Tech Corp is a startup that uses agents to help blind and low-vision users navigate their surroundings. A recent success story making headlines in the region, the San Diego-based company was acquired by Blue Diego Investment Group earlier this year. Terms of the deal were not disclosed.

For many years, researchers and startups attempted to solve the problem around eyesight by tackling it from the human aspect, however, no one was able to demonstrate this at large scale until Aira came around.

Founded in 2014, Kanuganti the founder of Aira said instead of trying to fix the actual human, Aira focused on the problem associated with the “conditions” of a particularly human being, which lead to the creation of Aira glasses. Aira’s technology has over 250 agents in the U.S. and has raised a total of $35 million in venture funding.

Today, Aira operates around the clock in the U.S., Australia, Canada, and New Zealand and has partnered with national blind consumer organizations such as the National Federation of the Blind, the American Council of the Blind, among others to make its products accessible to more people.

To date, the company has over 25,000 locations where its service is free to use, enabled by partnerships with AT&T, Walgreens, Bank of America, and other big brands.

Kanuganti said what he was most proud during the five years he spent building Aira, was the impact the company made on the human lives.

“It was a fascinating journey for me, and it was literally life changing for a lot of people. With Aira, people’s behavior and the day-to-day aspects of how they do things were changed. Similar to how mobile phones impacted how we go about ordering coffee or finding transportation, everything was changed —  Aira did that, for blind people.”

Kanuganti, previously served as Aira’s founder and president, departing the company almost a year ago to begin building his next big idea. According to a news release, while Kanuganti pursues his new project, he will continue to work closely with Aira.

Still in stealth mode, Kanuganti’s latest startup called Luther Inc., said the next problem that he aims to solve is memory and how humans recall those memories.

“Human memory is notoriously fickle. Around 80 percent of people think that their memory retention is more problematic than the person sitting in front of them.” Kanuganti said, “We seek a lot of information, especially in the digital world but the amount of information you remember is very little.”

Currently, if you visit Luther’s website: Luther.ai, the site navigates the visitor to a black screen that leaves you curious to learn more details. The only text that the site contains is the company’s tagline “Never forget” showcased in White and Orange colors, along with a get in touch email contact.

During Aira’s inception, there are a majority of investments in companies solving the problem of blindness and invasive procedures, now, there is now a trend of of investments that are happening in the memory space, Neuralink memory company being the latest example.

Neuralink, is a quiet San Francisco-based startup headed by Elon Musk which is working to leverage chipset technology to augment the human brain in regards to memory. In particular, the company is developing implantable brain-machine interfaces (BMIs), although it still in its early stages, the company has not introduced a market solution, just yet.

Luther is a potential competitor to Neuralink and other memory companies, with the premise being based on offering a solution that replicates or implements biological memory functions using technology without any invasive procedures.

Kanuganti said Luther is a convergence of internet of thing (IoT), AI and ambient computing. He defined ambient computing as the idea of its technology coexisting alongside with humans, essentially, the computer will assist you with your daily task but the user is primarily in control.

Kanuganti said all the trust, brand, partnerships, and products that you create with your customers indefinitely carries over when you build your next company as an entrepreneur.

With Luther, he believes this will be critical as he navigates the venture world over the next few years. In addition, Kanuganti said talent is going to be super important for San Diego as a tech ecosystem to retain startups and tech here, as well as entrepreneurs building here.

“Being able to have a stream of people from UC San Diego and deploy into startups here in San Diego is a priority. But I think there is still some work there. Because I went to UCSD, I had access, where other startups wouldn’t necessarily have access to.”

Kanuganti who incubated his previous company while he was an MBA student at the UCSD Rady School of Management, said that the university was a key part in pooling top talent.

“I have enough conviction that this is the next big thing that humans will need to augment their bodies and be efficient functioning human beings. Now, it’s go time.”

Luther plans to raise institutional financing over the next few months, the company said.

The company, headquarter in La Jolla, said it will hire about 10 to 20 local employees over the next year or two.