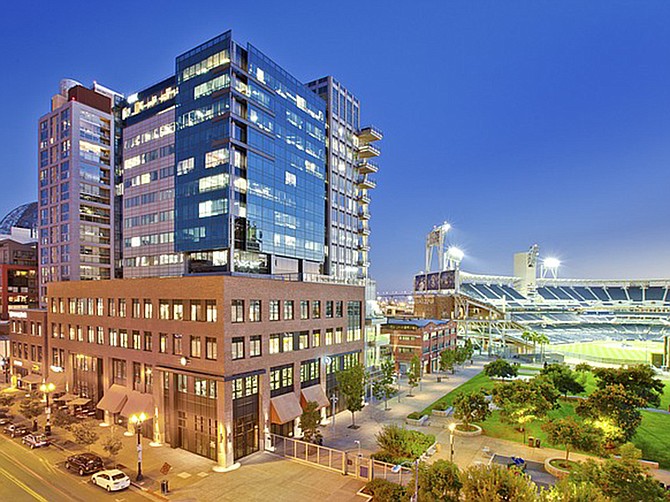 CEO and co-founder Reid Carr said Sherman Heights is an up-and-coming neighborhood just like East Village was when Red Door first moved into the area in 2002.

“I do believe we played a part in how this area has progressed,” Carr said.

Carr said he wants to be part of what he sees as the coming revitalization of Sherman Heights.

Much like East Village was when Red Door started, “Sherman Heights is more of what at this point is a lot of different types of diverse business opportunities.”

“More than a year ago, we said, ‘let’s start looking around and see what our opportunities are,’” Carr said.

Carr liked what he saw in Sherman Heights.

“It’s not all high-rises and all that,” Carr said. “We’re not a high-rise company.”

With a staff of four, Red Door moved into its first offices at 345 15th St. in East Village on the opening day of the Padres first season in Petco Park.

Mark Cafferty, president and CEO of the San Diego Regional Economic Development Corp., said Red Door has made a name for itself “as a forward-thinking company willing to chart their own path.”

“The decision to move its headquarters to Sherman Heights is one worth following,” Cafferty said. “Nearly 20 years ago, the company began a movement in East Village that proved to be monumental for the growth of downtown San Diego.”

When he started looking for a home for Red Door, “I had zero interest in coming down to East Village,” Carr said.

At the time, East Village was mostly a collection of old warehouses and Petco Park was little more than a hope and a promise.

Still, Carr said after looking around the neighborhood, he thought it was on its way up.

Since then, East Village has come to life as one of the most up-and-coming neighborhoods in San Diego, with several new high-rise apartment towers, innovative office projects and a downtown facility for the University of California San Diego.

Grew Along With Neighborhood

As Red Door grew along with the neighborhood, it quickly ran out of room in its first East Village home, and moved to 770 11th St., moving again into Diamond View in 2004.

At first, Red Door was on the 11th floor, but Carr said being high up in a tower proved frustrating.

The company has about 65 people working out of its Diamond View offices with 10 to 12 working in Denver and one-person operations in Salt Lake City, Tucson, New Orleans, Tijuana and Manila.

Red Door’s culture puts a strong emphasis on the out-of-doors, and once company workers got up to their offices, they often stayed there.

“You need to take an elevator to get outside,” Carr said.

There was a patio, but that was too confining and didn’t encourage people to wander.

The company moved down to the first floor after spending about five years in its 11th floor roost.

Rising rents and the chance to own its own space, then moved down to the first floor of Diamond View Tower

The new site has the room to roam that Carr likes.

“There’s a lot of opportunity to create some outdoor space,” Carr said.

Carr didn’t have a firm estimate, but said he expect to spend more to redevelop the property than he did to buy it.

Plans are very much in the early stages, with AVRP Skyport architects leading the designs. The overall idea is to create a campus setting.

“It’s sort of this eclectic gathering of buildings,” said Chris Veum, president of AVRP Skyport. “The challenge is how do you maintain a little of that eclecticism and also do what’s right for Sherman Heights.”

The two-story building on the east end of the site is “a mid-century retail building,” Veum said.

“We just want to clean it up and update it a little bit but leave the bones the way it is,” Veum said.

In the center of the property is a vacant metal warehouse building.

“We’re calling that the hub building where the two sides of the site kind of meet in the middle,” Veum said. “It’s got a big, wide open floorplate.”

As its name implies, the hub would be an open gathering area with amenities such as a café that would encourage those who work at Red Door to bump into each other to share ideas.

“We’re still toying with all kinds of options of what can be done within their buildings and make it a fun place where people want to go,” Veum said.

Red Door’s Diamond View offices are very open, and Carr said he wants to ensure that the new offices give people the same interaction with each other.

“The building to the west is probably the biggest challenge,” Veum said.

Until July, the building is leased to Unite Here labor union.

It’s pretty much a converted house, and Veum said he wants to find ways of brining natural light into the workspace.

The design is limited by zoning regulations that require that the building have a craftsman, Mediterranean or Spanish look.

“We can’t make it this modern building with steel and glass,” Veum said.

People who work at Red Door will have a say in what their new home will look like by touring the site using virtual reality to see what it would look like with a variety of design scenarios.

Construction on the new site will begin in July and must finish by April 2021, when Red Door’s lease runs out at Diamond View Tower.