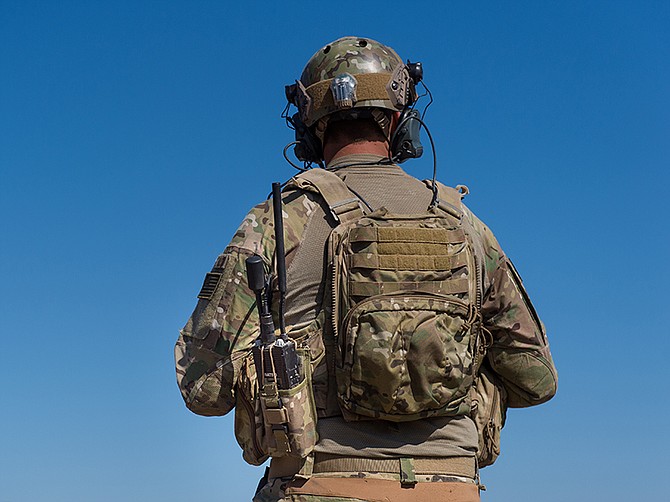 Sophisticated radios for military maneuvers are one product driving revenue at Viasat Inc. past the $2 billion mark.

“This remains a growth business for us,” said Andy Kessler, a former fighter pilot who is now vice president overseeing next-generation tactical data links for the Carlsbad company.

The radios include the BATS-D handheld radio and the Small Tactical Terminal, which tap into the U.S. military’s Link-16 radio system. More than just a voice radio, Link-16 keeps everyone on the system updated with the positions of friendly forces and adversaries.

A Tool for Situational Awareness

BATS-D is the handheld Link-16 radio, though the adjective is a bit of misnomer. “No one actually holds it,” Kessler said.

The object has roughly the same form factor as a walkie-talkie from the 1970s. It is small enough to carry in one hand, but at 2 pounds, picking it up is more like picking up a brick than a contemporary smartphone. An airman, soldier or sailor working special operations wears the BATS-D radio in a harness strapped to the chest and back. He keeps a hardened Android smartphone close to his chest. The latter displays a map of the battlefield, with markings indicating the blue forces and red forces (or if you prefer, good guys and bad guys).

Acting as a forward air controller, that special forces member can use the BATS-D radio to call in an airstrike on a position. Kessler said the process previously took 45 minutes “on a good day.” With BATS-D, he said, the process can take as little as 30 seconds.

Miniaturization has brought such electronics down to a portable size. In the 1990s, a systems integrator had to pack a half-ton of electronics into a space the size of a refrigerator, Kessler said. In the early 2000s, it was 75 pounds of electronics in the space of a microwave oven.

Today Viasat builds Link-16 Small Tactical Terminals for aircraft. They are about the size of a bread loaf and weigh 15 pounds.

In January, the U.S. Air Force awarded Viasat a contract for BATS-D radios with a $90 million ceiling. The deal also covers training.

Viasat approached the challenge of developing BATS-D as in the manner of a commercial electronics maker rather than as a defense contractor, said Kessler.

The design was reputedly sketched on a bar napkin and developed over 18 months. It was first tested in a military scenario in 2016.

Viasat does the engineering work on its own dime rather than as part of a formal government program, run with government money (often called a program of record). As a result, Viasat keeps the intellectual property and the government client gets advanced electronics.

What comes next? There will likely be software and firmware upgrades, as well as “future proofing,” Kessler said.