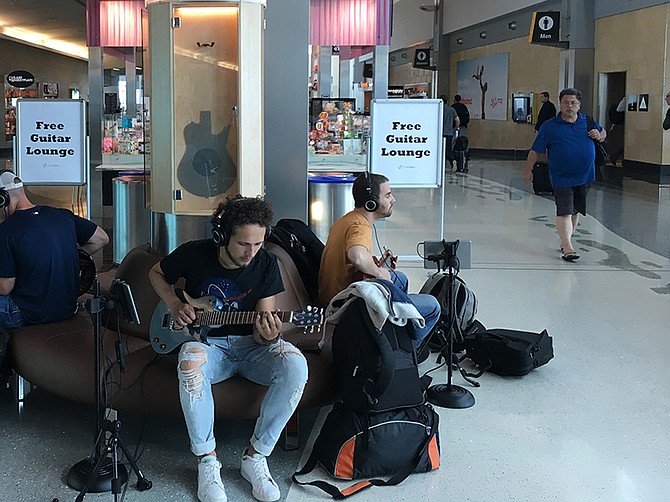 Photo courtesy of Ciari Guitars. The Music Oasis kiosk gives guitar players a free place to play and try out a Ciari guitar at the airport.

Ciari Guitars, a San Diego-based music tech startup is seeing early success with the release of its latest product. The foldable tech guitar, called the Ascender, was recognized by Guitar Player Magazine (Editor’s Pick) late last year and expects to increase annual revenue growth as it expands its product line.

The local startup is best known in the music community for re-inventing the electric guitar instrument. The company developed the first high-quality foldable guitar that can be used professionally as a backup or even as a main instrument.

Founded by Jonathan Spangler in 2016, Spangler was the former chief patent counsel for a medical device company, NuVasive Inc. for 14 years. Spangler brings a wide ranging experience. He owns 10 patents in the U.S.

“Guitar air travel is fraught with precariousness. If you’re traveling with your guitar, there’s a lot of uncertainty as to whether the guitar is going to make it in one piece. You put it onto the plane and you get it back, there’s a high chance it gets damaged or broken.”

The genesis of the Ascender occurred during his work travels, as an aspiring musician, Spangler wanted to bring a guitar with him for practicing in hotel rooms. When he was unable to find a full-sized, gig-ready instrument that could fold to fit under a plane seat, he was inspired to launch Ciari Guitars. In particular, the company aims to target music industry professionals, business professionals, and people with an on-the-go lifestyle.

According to Almanac of American Recreational Habits, in the U.S., about 25 million play guitars, another way of viewing this is that an estimated 7.5% of the population are guitarists. In total, there are approximately 2.6 million air travelers a day, which means roughly 195,000 guitarists could experience Spangler’s shared pain point each day.

“For artists, this is how they make their living. This isn’t just a nice-to-have; it’s a must-have.”

So far, the company said it has mostly been bootstrapped and is looking for investors for its seed round to scale its product pipeline and development efforts.

Ciari Guitars, debuted the Ascender at winter NAMM — short for the Carlsbad-based National Association of Music Merchants — in January of last year to over 140,000 attendees. Ciari Guitars was 1 of only 3 companies featured by CNN, out of 1,000 plus exhibitors at winter NAMM 2019.

Unlike other portable guitars, which look to change the size or shape of the instrument, Ciari’s product folds at the neck. The flip of a switch lowers the tension of the guitar’s strings, and unlocks a hinge, allowing it to fold without risking damage to the instrument.

The company said it has pre-sold about 50 Ascenders so far, with an average sale price of $3,500 to customers mainly in the United States.

Spangler’s startup recently graduated from the Airport Innovation Lab, a San Diego International-based accelerator for companies targeting the airport/airline industry. The companies participate in a 16-week program, which culminates in a presentation to the San Diego County Regional Airport Authority. Startups compete for a contract with the airport.

“We’ve gained a ton from the airport innovation lab. I’m a massive fan of what Rick Belliotti, Gina Jacobs, and others have created,” Spangler said, “Their forward thinking has benefited a “great” many startups focused on the airline and air travel ecosystem.”

During the program, Ciari Guitars successfully tested “Music Oasis” free guitar lounge staffed by a Ciari attendant to demonstrate, educate, and provide “try before you buy” opportunity for potential customers. A hit among air travelers who are looking for new ways to de-stress, Strangler said they received positive feedback from most of the users.

“For a two week period, we had this live and people loved it,” Spangler said, “Over 500 surveys within that period, we scored a 4.5 out of 5 right rating.”

The startup is currently in talks with the San Diego airport for long-term placement in Q1 2020, according to the company.

Spangler said, the big inflection point was the validation and change in conversations around the technology their building. The company said it’s now looking to collaborate with artists and music managers to create endorsement deals.

“Now we’re getting artists and managers contacting us, saying ‘hey we saw this, we’d like to get my artists working with your company and things like that, it’s a fun new chapter.”

Depending upon finish and wood, the guitar cost as much as $2,900 and up. The company said it has future developments to introduce mini and gig amps, and several other tech instruments. The company’s headcount is 3 local employees, with 1 in Tennessee. Annual revenue and projects were not disclosed.

“Guitar air travel opportunity has never existed. We’re the first one ever that culminates in it being a personal item and the first ever travel guitars that professionals can play on stage. Each one, we’re proud of and now that we have lightning in a bottle — we’re fundraising to get that out.”