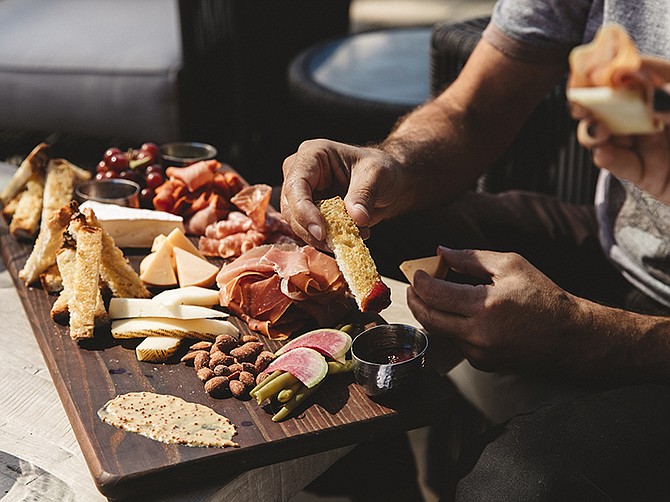 Photo courtesy of Diana Rose Photography. Graze by Sam the Cooking Guy is a wine-focused restaurant and bottle shop.

ously known as Sam the Cooking Guy – the San Diego-based cooking personality with his own online cooking show – has 29,000 followers on Twitter, 112,000 followers on Instagram, over 150,000 likes on Facebook and 1.51 million followers on YouTube.

That’s because Zien’s shtick is what he’s dubbed “reality cooking” – whatever happens when he shoots stays in the show. And so far, this casual and relatable approach has resonated rather well with the masses.

Recently, his strength in numbers and social media reach, anchored by his ability to bring humor to his clips and his “big in taste, small in effort” style, has allotted him the opportunity to expand his culinary empire off-screen. With the help of San Diego-based hospitality group Grain & Grit Collective, Zien opened Not Not Tacos at the Little Italy Food Hall in 2018. And just last month, he debuted Graze by Sam the Cooking Guy, a wine-focused restaurant and bottle shop, right across the way from the Piazza Della Famiglia as part of the Little Italy Food Hall expansion. Slated to launch later this year is an as-yet-named Seaport Village eatery that will replace Buster’s Beach House as part of the Port of San Diego’s continued efforts to revitalize the area.

“What makes my stuff work… (is) sort of how normal I am in the world of cooking,” said 60-year-old Zien, who never attended culinary school. “I don’t have the chef chops or the technology or the techniques. But, when people watch me, they say, sh, I think I can do that because that guy is doing it. I feel like I’m the everyday man of cooking… I’m not trying to impress at all. I just want you to watch and look and go, ‘that looks delicious and easy and I bet I can make that.’”

Michael Joseph DiNorscia, CEO at Grain & Grit Collective, who asked Zien to be the face of his Little Italy project after meeting him through a mutual friend, credits him with the company’s recent success.

“…We absolutely have a secret weapon in Sam Zien, aka ‘Sam the Cooking Guy’,” he said. “Sam always gets us thinking outside the box and inspires us with his culinary abilities and visions… (He’s the right person for the job because of) Sam’s passion and adaptability in creating the most compelling guest experience possible.”

Added Ann Moore, chair of the Port of San Diego Board of Port Commissioners: “The success of Grain & Grit Collective combined with the popularity of ‘Sam the Cooking Guy’ has the potential to transform and enhance the experience for Seaport Village visitors and tenants.”

Born in Vancouver, Canada, and with a professional background in advertising, real estate and biotech, which landed him in Los Angeles and then San Diego, Zien’s food career began after a planned online travel show came to a halt when 9/11 happened. So, he shifted gears to cooking when he saw a local network’s food segment that seemed stale and boring, he said. He thought to himself, “someone should do that and make it resonate with the people at home.” Jobless and clueless as to what his next move would be, Zien decided that “someone” would be him.

Zien shot a demo with the same crew he had hired to go to Tokyo, Japan, for the first episode of his failed travel show and pitched it to various local television networks. Then, someone from local channel Fox Six (at the time) called.

“He said, ‘I got to be honest, I got your demo, I watched it and I really enjoyed it,’” said Zien. “’And then I asked people in the newsroom to watch and they thought it was good, too. You were likable and a little odd, different than how cooking shows happen these days. I feel people would get you and you could be encouraging.’”

So Zien began doing two-minute segments twice a week. And then the accolades began rolling in; a year later, shortly before the two-minute clips turned to a 30-minute show appropriately called “Sam the Cooking Guy,” Zien won two Emmy awards. That was followed by two more Emmys a year after, until Zien won a total of 15.

Honors aside, Zien kept building his portfolio. After bouncing around from local station to local station, Zien ended up on Discovery Health with a program called “Just Cook This! With Sam the Cooking Guy.” And, shortly after that, he landed his first book deal when a publisher from New York reached out to him expressing an interest in collaborating. His first book, “Just a Bunch of Recipes”, features 126 of Zien’s favorite foods. “Kitchen Short Cuts” and “Just Grill This” followed.

Today, Zien still films his YouTube series, this time with his son as the camera man and one-man edit team. And Zien’s undeniable talent and ability to simplify cooking continues to influence the local and national culinary community. Natalie Morse, marketing director at San Diego-based Chosen Foods, an avocado oil-focused company that has collaborated with Zien, agrees.

“Sam is a great friend to Chosen Foods and has supported us on many campaigns over the years,” she said. “Outside of cooking, his quick wit and vibrant personality brings something special to the culinary scene here in San Diego but also across the country. In addition to his undeniable talent in the kitchen, he’s made cooking an activity for everyone to take part in. From his social audience to YouTube channel, he gives followers an opportunity to get their own hands dirty in the kitchen and have fun at the same time.”