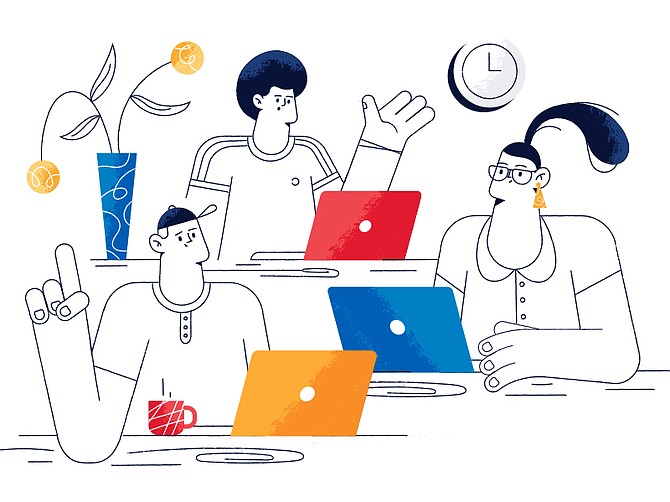 San Diego County is fertile ground for coworking companies in 2020, with new companies entering the market and others expanding.

Among the latest entries, Industrious in February opened a 27,555 square-foot coworking operation downtown at 1 Columbia Place, taking the entire second floor of the building.

Based in New York, Industrious also leased about 30,000 square feet of space in the UTC Westfield mall as part of a partnership with Seritage Growth Properties, which is redeveloping the former Sears site in the mall.

The mall site is tentatively set to open in July, said Katharine Lau, senior director of real estate at Industrious.

Lau said the region’s strong job growth and its concentration of life science and high-tech companies “really drew our attention.”

Downtown was picked for Industrious’ ‘first San Diego site because of its Little Italy location near transit and the live-work-play environment of the neighborhood. UTC was chosen for similar reasons.

The firm began looking for a San Diego site in January and Ratika Sehgal, who has the Office Evolution franchise in San Diego County, is in negotiations for a location, Office Evolution CEO William Edmundson said. He declined to say where.

The firm forecasts that by the end of 2020, coworking companies will take up more than 1.8 million square feet.

Even though the growth is substantial, coworking by the end of 2019 accounted for only 1.9 % of the total inventory of office space countywide, according to JLL.

The apparent implosion of WeWork last year “was a bit of a damper on the market,” said Stephen Brincks, an assistant professor of finance at the Fowler School of Business at San Diego State University.

But Brincks said WeWork’s troubles “also helped raise the visibility of coworking to companies and landlords.”

“That’s an unanticipated benefit of the WeWork implosion,” Brincks said, adding that he foresees fairly robust growth for coworking, possible reaching up to 10% of the overall office market in 10 to 15 years.

“I wouldn’t be surprised if you didn’t have above average growth, from a relatively small %age to a larger %age of the market,” Brincks said.

Alan Nevin, director of economic and market research at Xpera Group, said coworking “is still a needed product” but he predicted a far lower growth rate and said coworking will remain a relative small piece of the overall office market in San Diego County.

Scott Schindler, a senior associate with JLL, said he sees a rising demand for coworking space.

“From a tenant’s perspective, from a business owner’s perspective, I think coworking is getting more important now than ever, not just because it’s a cool space,” Schindler said “Coworking provides the flexibility for growing companies to grow quickly and not have to worry about their internet, their utilities.”

Jack Blumenfeld, an associate with Colliers International brokerage, said demand is strong in submarkets not normally associated with coworking.

“Even out in Miramar, there are a couple of coworking places over on Trade Street, they’re pretty full,” Blumenfeld said. “There is still a large demand in the San Diego market and I think that’s a lot because of all the universities out here.”

Blumenfeld said newly graduating students opt to start their own businesses as entrepreneurs in a coworking environment rather than take a traditional 9-to-5 job.

Countering that somewhat, Schindler said some landlords, particularly those who own smaller buildings, get nervous about leasing more than 20 or 25 % of their space to coworking companies because the coworking business hasn’t been around that long.

Michael Castellano, a senior director at Cushman & Wakefield, said some landlords shy away from coworking companies for fear that the people who use the coworking space might compete with other tenants in their building who have conventional leases.

“As things tighten up, there’s an opportunity to find other uses,” Castellano said, adding that “It’s more competitive for everybody to find space.”

Among coworking companies looking to expand in San Diego County is CommonGrounds Workplace. Headquartered in Carlsbad, CommonGrounds has 11 locations open including Carlsbad with seven under construction and due to open later this year.

Bates said the business model of coworking companies is shifting. Historically, coworking has been seen as solution for individual entrepreneurs and startup companies with a handful of employees.

Tenants could use the space for a day, a week, a month or longer, sometimes paying with a personal credit card or signing a formal lease.

That’s still true, and some coworking companies cater to that clientele, but Bates and others said they’re seeing more and more big companies taking large blocks of coworking space for longer lease terms.

Where in the past, coworking companies have simply leased building space for their operations, Bates also said some, including his own, are shifting from straight leasing to forming partnerships with building owners where they share revenue with reduced or no lease fees.

Coworking companies also may take over building management and provide amenities for all a building’s tenants as part of the deal.

Castellanos of Cushman & Wakefield said that like Bates, he’s seen the tenant mix in coworking spaces leaning more and more to bigger companies.

“The bigger companies tend to use it when they’re entering new markets and they don’t have an established market.

Unlike some others, Jason Hughes, chairman, CEO and owner of Hughes Marino, sees the lure of coworking waning.

“Coworking is fine for some groups, but more and more coworking tenants have become disillusioned with the setup. We have a lot of clients asking us to find them direct or sublease space as they don’t like the lack of privacy, the noise, the cleanliness and the high cost,” Hughes said. “Turns out, in most cases, the occupancy expense is actually more costly, even factoring in all of the other costs like furniture, data, IT (information technology), etcetera, versus that of having your own space.”

Hughes said coworking has “bubbled to an unsustainable level.”

“While most coworking sites budgeted between $500 to $700 per desk of revenue, the majority aren’t even getting half that, and they’re still more empty than filled,” Hughes said.

“From what I saw nationally, about 40 % of coworking companies make a profit. About 30 % break even,” Brincks said.