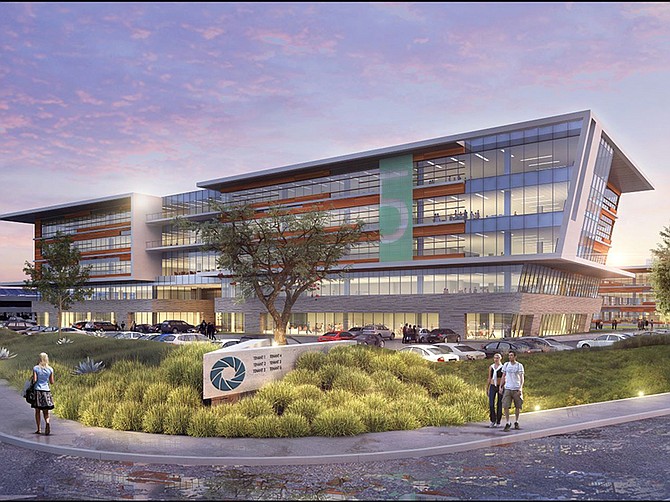 Photo courtesy of Lincoln Property Company. Construction has started on the Aperture office complex in Del Mar Heights with an eye toward drawing a company’s corporate or regional headquarters to San Diego.

With construction just starting on what will ultimately be the five-building Aperture office campus in Del Mar Heights, developers are hoping to lure a Silicon Valley or San Francisco Bay area company to move its headquarters or a big chunk of its operations to San Diego.

“We’re in contact with the key brokers in those markets and we’re chatting with them about the project,” said Brig Black, executive vice president of Lincoln Property Company for Southern California.

“We’ve seen a significant commitment by Apple to the San Diego region and we’re hoping to see more tenants recognize San Diego’s unique business environment, educated workforce and engineering talent coming out of our universities,” Black said. “This is truly going to be a cutting edge campus.”

Apple last year occupied 97,000 square feet of offices in the Eastgate submarket and leased an additional 360,000 square feet in Eastgate that it’s expected to occupy in 2021, according to a report by the commercial real estate brokerage Cushman & Wakefield.

Black declined to say how much Lincoln Property paid for the site nor would he say what it will cost to build the 640,000 square-feet of office space spread over the five buildings.

Lincoln Property Company in late 2019 formed a partnership to build Aperture with Gemdale USA Corp. in a $70 million recapitalization of the project.

Gemdale USA is a subsidiary of Gemdale Corp., which describes itself as one of the largest real estate developers in China.

“It took us four years to get entitled and everything else,” Black said, adding that the target market is a high tech or life science tenant.

“We are specifically marketing to those types of companies,” Black said. “We would be very excited to welcome a new technology company to San Diego.”

Black said Aperture should appeal to Bay Area companies in part because of its location.

“It’s one of the few coastal sites left where a company can scale in size in scale with five buildings,” Black said.

Although the site itself isn’t waterfront, it’s within a short drive or bike ride to Del Mar.

The site also will have secure entrances which appeals to life science and high tech firms involved in propriety research.

Designed by Gensler architects with McCarthy Building as the contractor, Aperture is within the master planned community of Pacific Highlands Ranch. Lincoln Properties is taking the unusual step of building the first two buildings in the office park on speculation.

Typically, office developers who have tenants lined up lease all or a good portion of their projects before starting construction.

Construction of the rest of the campus will follow once those are leased. “It’s going to be driven by tenant demand,” Black said.

JLL is handling the leasing of Aperture.

“Typically, biotech and life science companies want something in six months to a year,” Urie said. “If you are growing and you need space fast, we’re under construction. We can meet your timetable.”

“The majority of all projects under construction in the nearby area have already been lease, so there’s very little available in this market,” said Tony Russell, also a managing director of JLL.

Aperture has been specifically designed for the life science and biotech market with ceiling heights of 10 feet, clear heights of 15 feet and large open floor plates.

The buildings will be connected by an exterior walkway with balconies meant to give them an indoor-outdoor feel.