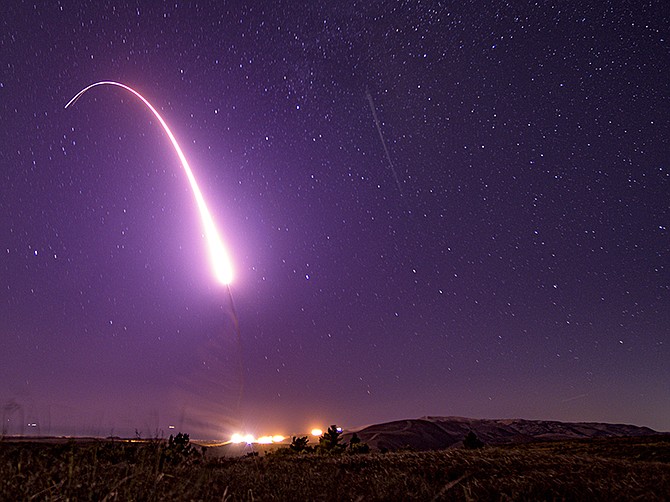 Photo courtesy of U.S. Air Force. An unarmed Minuteman III missile launches from Vandenberg Air Force Base in October. Kratos Defense is a subcontractor on a program that is expected to replace the Minuteman.

Kratos also announced that it will be part of the U.S. Air Force effort to replace its aging Minuteman III nuclear-tipped missiles. It will be a subcontractor to Northrop Grumman Corp., the prime contractor on what the Air Force calls its Ground Based Strategic Deterrent program. The announcement came Feb. 26.

Kratos said it will provide vehicle transporters, including highly complex missile transporters, payload transporters and subsystems. The business’ C5ISR Division will do the work. The initials stand for Command, Control, Communications, Computing, Combat and Intelligence, Surveillance and Reconnaissance.

“All of Kratos is proud to work with Northrop Grumman, one of our nation’s and industrial base’s most important providers of solutions for the security of the United States. This opportunity, which our entire organization will focus on and support, is expected to be one of Kratos’ most significant future programs,” said Eric DeMarco, Kratos’ CEO.

The Air Force plans to put the new missiles into service by 2029.

One quarter of Kratos’ business now comes from unmanned systems.

The XQ-58A Valkyrie and X-61A Gremlins are two of the unmanned air vehicle programs Kratos is working on. The former is expected to be a companion to manned jets. Kratos reported that it has initiated a production plan for 12 Valkyries, and plans capital expenditures of $15 million to $17 million on the project.

The latter drones, the Gremlins, are being designed to travel in swarms, and to be reusable.

2019 also saw Kratos acquire Florida Turbine Technologies, a company that builds small jet engines. With help from the acquisition, Kratos achieved a 16.1% jump in annual revenue to $717.5 million. Organic growth during the year came to 7.6%.

Looking ahead, Kratos forecasted 2020 revenue of $740 million to $780 million. Adjusted EBITDA is expected to be in the range of $72 million to $78 million. The abbreviation is short for earnings before interest, taxes, depreciation and amortization.