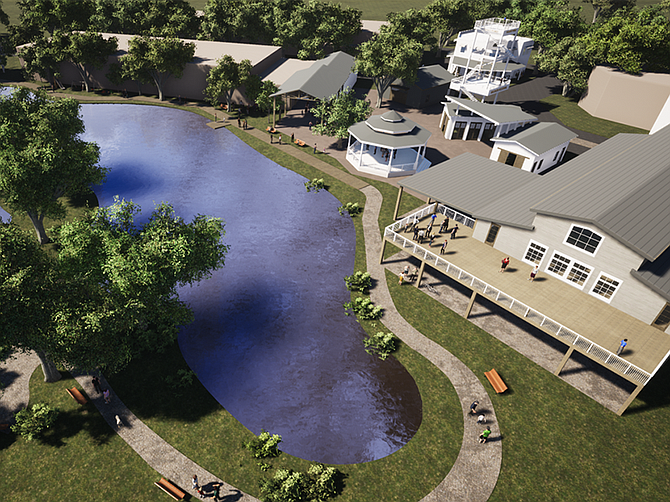 Photo courtesy of Jim Hagey. Developer Jim Hagey is planning a Ramona development that harkens back to the way homes and retail shops were designed prior to World War II.

Return to a time when people sat on their front porches, neighbors wandered by and stopped for a chat, or took their kids to a nearby pond to feed the ducks.

That’s what developer Jim Hagey has in mind with the $33 million Elliott Pond community he’s planning to build in Ramona, designed to harken back to the way neighborhoods looked and felt decades ago.

"We want it to look pre-1940,” Hagey said. “Elliott Pond will be altogether different from the bleak, unsocial projects that have been built in Southern California for the last 80 years. We’ll have all the right elements – big front porches, narrow shaded streets and a short, safe walk to parks, sidewalk cafes, groceries, and other retail.”

Ramona architect Carole Wylie of Wylie Architecture Planning Interior Design - the primary architect on the project - said Hagey “is really bringing back that older neighborhood where people sit on their front porches and see each other and they communicate verses what happened to architecture when the auto came along.”

The project will include 44 single-family detached homes, 17 townhomes, and 13 apartments, five restaurants, and 30,000 square feet of retail space, Hagey said, adding that the numbers could change slightly.

A dining hall also is planned, where Hagey said he hopes that residents will gather to dine as a community once a week.

“Maybe only 25% will show up at any given time,” Hagey said. “I hope it works and other developers copy it because, from what I’ve read, loneliness is a huge problem in the U.S.

Hagey said that he modeled his plan after similar projects he’s visited in South Carolina, Georgia, Alabama, and Oklahoma.

“I’m stealing a lot of ideas from them,” Hagey said.

The project is still working its way through permitting, with the start of construction expected in two to three years, said Justin Ruthenbeck, Hagey’s partner and COO of the company Hagey formed to build it, Elliott Pond, LLC. Hagey’s brother, Bill Hagey, is a limited partner.

Hagey said expects to finish the first of the retail space and start delivering residential units in late 2023.

The project covers 22.4 acres one block south of Highway 67 at Ramona Street and H Street adjacent to an existing shopping center anchored by a Stater Brothers market.

Hagey and Wiley said the development follows the design of the communities of bygone eras, with narrow streets, shade sidewalks and within an easy walk or bicycle ride to a shopping center.

“It’s not like we invented it. It’s just that we’re trying to get back to those really great qualities communities had,” Wylie said. “We want to get back to that instead of the mentality of the developers who take the site and maximize the square footage they could get out of it.”

Hagey said the houses “are going to be a little bit like farmhouses,” and each one will have an elevated porch big enough for outdoor dining. Even the apartments will have porches, Hagey said.

Garages will be tucked away out of sight.

“The automobile does not take over the look and charm of the neighborhood,” Wylie said.

That pre-war look will carry through the rest of the project, including one restaurant that will have a deck built over the edge of the pond with a wrap-around porch, Wylie said.

In keeping with Ramona’s farming traditions, Hagey said he wants to include an area for farm animals to one side of the pond.

Comparing what he has in mind to 4-H clubs, Hagey said “People tend to lose touch with animals. I think it will be kind of fun.”

Hagey also is looking for barns that he could move onto the site as part of the development.

“Anybody in Ramona that has a barn they want to sell, we want to bring it over and put it on our property,” Hagey said. “We want this to look like Ramona.”

Hagey is very much enthralled with the idea of people getting to know their neighbors, and he said that neighborliness is a primary theme of this development, even in a time of pandemic when social distancing has become the norm.

“The pandemic will end,” Hagey said.

If anything, Hagey figures that with more people accustomed to working at home instead of commuting to work as a result of the pandemic, communities like Ramona will become more appealing.

In keeping with the work-at-home idea, Wiley, the architect, said that every home will have an area that could be used as a home office.

“We do think that Ramona is the next hot spot, that there will be a lot of people that will want to telecommute,” Hagey said.

Carol Fowler, a member of the Ramona Revitalization Committee and chair or the committee’s Economic Development Committee, said Elliott Pond would provide Ramona with the town square it lacks and the walkable neighborhoods it craves.

“The community loves it,” Fowler said. “We live in a town with a state highway down the middle. It’s not very walkable,” Fowler said.

She said that Ramona had Hagey’s community in mind in 2014 when it developed design codes governing new construction along Main Street.

“Everything that Jim is trying to accomplish fits the design standards,” Fowler said.

Fowler said Nagy’s plan to use the pond as a central part of the development was important to the community.

“Everyone in Ramona loves the duck pond and he wants to keep the pond and it just works,” Fowler said.

Hagey said his plans for the development changed as he met with Ramona residents.

“The people of Ramona, they really are the shapers of this plan, Hagey said, adding that he was working on the plan on and off since he bought the property in 2000.

“It was first going to be all residential. Then, people in Ramona kept telling me, ‘there’s nothing to do,’” Hagey said. “They wanted a place to hang around and socialize. All they have is parking lots and traffic. They wanted someplace to see each other.”

Hagey worked on the project until 2009 when the Great Recession hit, then took it up again in early 2018.

His other project was in Rancho Santa Fe, which Hagey described as “a 15-lot project on 31 acres.”

“There are 15 mansions there now, but no vitality. I don’t think the neighbors interact at all,” Hagey said.