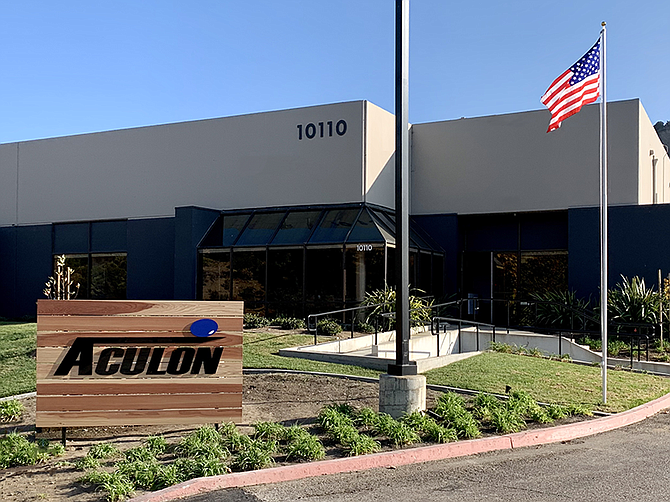 New building space means increased opportunity for Aculon, a maker of specialty chemicals for electronics manufacturers and other industries.

Also going up is Aculon’s patent count. The business has 38 U.S. patents, up from 21 in 2016, when the business’ innovation in waterproofing technology was featured in the San Diego Business Journal.

Revenue grew 40 percent between 2018 and 2019, Hughes said. Granted, 2020 was “not the first half we expected,” but he said the business is clawing back from the decline.

Aculon is privately held and does not publicly disclose its revenue.

Like other employers, Aculon sent employees home as the coronavirus pandemic swept over the United States. However, it has the distinction of being a business that ships into China, where the pandemic hit earlier. April and May turned out to be strong months, Hughes said.

The products coming out of Aculon’s Sorrento Valley plant are the active ingredients in chemical coatings for electronics, medical devices and other goods. Some coatings are hydrophobic, or water resistant. Aculon sales materials show highly magnified photos of liquid forming globe-like droplets on treated surfaces, such as printed circuit boards. In a 2016 interview, Hughes said the market for waterproofing printed circuit boards was around $1 billion.

The business has about 100 products.

A new offering is an anti-fingerprint coating. Hughes said a leading U.S. company uses it on laptop computers to keep a user’s oily fingerprints from showing up on surfaces.

There is also a market for waterproof technology for medical devices. Customers are looking for a Teflon replacement, Hughes said.

Working at the Nano Scale

Aculon’s customers apply very thin coatings of its chemicals, only a few nanometers thick. A human hair is about 60,000 nanometers in diameter. A human red blood cell measures 6 or 7 nanometers at its widest dimension.

Aculon also sells into the oil and gas business — however, these days, that industry does not contribute much to revenue.

The company got its start by licensing the rights to certain chemistry from Princeton University. Aculon President and founder Eric Bruner studied there, as did Eric Hanson, vice president of technology. Bruner earned his bachelor’s degree from UC San Diego.

The business has offices in Singapore as well as Amsterdam, with a warehouse a short distance away in Rotterdam. In the 2016 interview, Hughes spoke of interest among potential European customers. However, they were cool to the idea of being serviced out of California. The European operation seems to have solved that problem, offering marketing and financial advantages, not to mention distribution on the continent. Three out of four European customers are able to get Aculon deliveries within 24 hours, the business says. Most everyone else in Europe can get it within 72 hours.

Of course, Aculon’s 25 employees thought of home when the coronavirus began spreading.

Employees felt very strongly about doing something to alleviate the situation, so for a while, the business turned over part of production space to making hand sanitizer. Aculon turned out the substance by the 5 gallon bucket, and shipped those buckets by the pallet load. Recipients included Sharp Memorial Hospital, Scripps Memorial Hospital, the San Diego’s Metropolitan Transit System and the USC Keck School of Medicine. The business also donated particulate respirator masks to organizations that needed them.

The pandemic has also influenced Aculon’s thinking about future products.

Customers in the market for anti-fingerprint coatings have begun asking for antiviral coatings, Hughes said. The challenge is access to testing facilities.

The customers are “looking for something that lasts,” Hughes said, adding that the market is probably not going away.