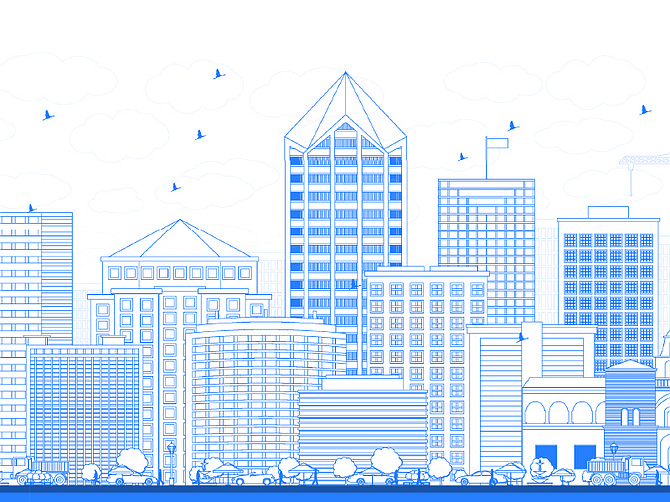 Architects, building owners, restauranteurs, retailers and just about everyone else associated with commercial real estate are scrambling to determine just how to cope with the COVID-19 pandemic as businesses reopen and people slowly start returning to work.

“While it is too soon to tell the long term effects on the design of office space, we have seen short-term modifications and approaches that are focused on the wellbeing, health and safety of employees,” said Tiffany English, principal of Ware Malcomb in San Diego, with offices in Sorrento Valley.

From building lobbies and work spaces to bathrooms and balconies, there’s little that’s not being looked at through the lens of COVID-19.

Some things, such as bringing more fresh air and natural light into buildings were hot topics prior to the pandemic and they’re getting an even closer look now, said Kevin Heinly, principal and managing director of Gensler in San Diego.

Added to that are more esoteric considerations, such as bathrooms with stall doors that open and close automatically and elevators that have their own air filtration systems and use smart phone technology to take people to the proper floors, Heinly said.

For now, most are taking a conservative approach – doing what they need to keep workers and customers safe and make them comfortable but stopping short of making any drastic changes in the layout of everything from office space to apartment common areas.

“What the clients are asking for is very simple solutions, ‘OK, we’re returning to work, what do we do.’ The question is much more complicated than that,” said Brian Koshley, principal of AVRP Skyport architects in downtown San Diego.

“Every solution is going to be different,” Koshley said. “That’s part of the challenge with our clients right now, not being able to give them a one-stop solution for all offices.”

Although they vary widely from one location to another, short term fixes include requiring office workers to wear masks while moving about or using common areas or even closing some common areas like break rooms, pulling chairs out of conference rooms to make space for social distancing, moving desks to keep workers at least six feet apart, installing plexiglass shields between work stations, placing sanitizing stations on desks and at touch points, limiting the number of people allowed on elevators and staggering work hours with people rotating between working at home and working in the office.

Some companies are also upgrading their air filtration systems.

Longer term, many say it’s anyone’s guess until a vaccine is developed and health care and government officials get a better handle on how long the pandemic will last and what it’s overall effect will be on the regional and national economy.

“I haven’t spoken with any organization that’s considering a major renovation in response (to the pandemic),” Koshley said. “I think the response is still fluid.”

Sandra Gramley, co-principal of Platt/Whitelaw architects in North Park, said now “is a time to reflect because we don’t have the answers.”

“As we go forward, I think mostly about flexibility,” Gramley said. “There’s this balance between people want to be around other people and that community aspect and then how can everybody be safe.”

Some of the ideas being kicked about include building on design measures that were already happening pre-pandemic such as using movable walls, providing more outdoor space and indoor rooms that open to the outdoors.

“One thing that’s happening in designing office space now is front desks are becoming a little more important because it’s the stop point for anyone coming into an office where they get checked, where they get their temperature scanned,” said Greg Mueller, a principal of Tucker Sadler Architects in downtown San Diego.

For instance, plexiglass shields may be put in place between receptionists and visitors.

Mueller said flexibility in design will be essential to prepare for a future pandemic.

That could mean using large floorplates with articulated walls replacing hard walls so that an office can easily be reconfigured.

With more workers likely to continue working from home, “I do think that the office will get smaller and the demand for large office space will go down,” Mueller said.

May Not Need Conference Rooms

Koshley of AVRP Skyport thinks that over time, companies may not even need conference rooms, replaced by video conferencing or smaller rooms..

“If there’s a need for a meeting, I don’t think anybody wants to go into a conference room,” Koshley said. “Those public gathering spaces are kind of in limbo until such at time that we understand how safely we can meet as a group.”

Just as building in fire-prone areas have special air filtering systems, “future buildings may also include hybrid ventilation options of switching to full outside air in flu season to reduce aerosol or droplet transmission.”

“Future adaptions are evolving with the science of the pandemic, but some other areas we are exploring include ideas of enhancing stair access to relieve pressure from elevators, adding elevators to reduce congestion, more use of natural ventilation, further implementation of gender neutral restrooms with innovative sanitation methods, using exterior circulation where possible and considering multiple lobbies or increased lobby area and incorporating more exterior spaces,” Dalton said.

Elevators are vexing trouble spots, especially in office of apartment and condominium towers.

“We’re going to do the best we can with design, but at the same time, personal habits are going to have to change as well,” said Mueller of Tucker Sadler. “It’s going to be one of those things, you’re going to wear a mask. If the elevator looks packed, you’ll have to wait for the next one.”

In some buildings, every floor has sanitary wipes at elevator entries which riders use to push buttons and sanitizers to clean their hands when they get off. Elsewhere, elevators have been equipped with toothpicks to push buttons. Touchless systems also are being refined.

Gramley of Platt/Whitley said escalators could be an alternative in some buildings, although fire safety codes don’t allow them in high-rise towers.

The commercial real estate brokerage JLL has made modest changes in its UTC offices on the first floor of the Aventine building with an idea that some of its clients could use it as a model, said Tim Olson, managing director of JLL in San Diego.

No Two People Adjacent to Each Other

Prior to the pandemic, JLL had adopted a modified open office plan with many workers in designated cubicle that had sort dividers.

Now, no one has an assigned work area, every other cubicle is closed off, workers bring in their own laptops and mouse at the start of the day and take it home with them at night.

“There’s never two people that are adjacent to each other,” Olson said.

Every desk has a bottle of hand sanitizer and tissues with hand sanitizing stations throughout the office.

The office is peppered with signs reminding to wear masks when away from their work stations, use hand sanitizers and follow designated routes when circulating through the offices to keep six feet apart.

JLL also is adopting a staggered schedule with about 25 percent of its staff continuing to work at home full-time and the rest rotating in and out of the office.

Olson of JLL said he’s seeing a mix, with some companies wanting more space and some wanting less as a result of COVID-19.

Some companies will want more space to have the same number of workers that they had pre-pandemic while others will opt to have some of their staff work at home so they can make do with the same amount of space.

Jeana Renger, vice president of Ferguson Pape Baldwin Architects in Kearny Mesa, said her firm specializes in life science companies, which have been as busy as ever during the pandemic. She said one client who remodeled one and a half years ago is back looking for more space – lab and office – so workers won’t be so close to one another.

Greg McClure, a principal of Delawie in the Morena District, said it’s too early to tell what the fallout from the pandemic will be on building design.

Renger and others say the open office or creative office trend which was the rage pre-pandemic won’t disappear post-pandemic.

“Our clients are not saying, ‘we want to put everybody in boxes, in private offices,” Renger said. “That’s not what they’re saying at all.”

Keenan of the DAHLIN Group said the creative office design “evolved as a way for people to interact with each other more openly and easily.”

“Humans still want collaboration and interaction, so we will find ways to make that happen safely,” Keenan said. “The old ways of individual enclosed offices are certainly not desirable under these (social distancing) circumstances either.”

Heinly of Gensler said the open office may evolve into a kind of hybrid as more people work at home.

Instead of formal work spaces, there might be a collection of informal, casual areas where workers can get together to collaborate, share ideas, train and feel they are part of the company but do heads-down work at home.

Retail which was already reeling as more and more customers shopped online has been especially hard hit by the pandemic in sort of a double-whammy – they re closed for business and people were getting more comfortable shopping online.

“It’s kind of like getting kicked when you’re down with COVID,” said Andrew Hull, president of Andrew Hull Stevenson architects in Sorrento Valley.

Prior to the pandemic, the trend among shopping center owners was to develop more open space for people to gather instead of running in to buy something then leaving.

Mueller of Tucker Sadler said some retail projects his firm was working on have been put on hold.

“It will be intriguing to see as the economy opens back, how many of these mom and pop stores that were going into these retail centers are still around,” Mueller said.

Mueller predicted that open-air cafes will become more common and restaurants will expand patio seating, possibly by taking over part of parking lots.

On the multifamily side, there is considerable debate on whether swimming pools will continue to be the almost mandatory amenity that they have been.

As people look for more open space, balconies and outdoor courtyards are likely to be in more demand.

Rooftop space – often the site of decks and lounges – will gain significance, and fitness centers within apartment buildings will spill outside, in a trend many architects see growing.

“We have started to hear a lot more discussion about making accommodations for working for home long term, live-work space so you’re not just having to repurpose your kitchen table to work but having some dedicated work space in your apartment or condominium,” said Matthew Geaman of Jospeh Wong Design Associates, headquartered in Bankers.

His firm has designed many of the new downtown apartment and condominium projects.

Like Koshley of AVRD Skyport, Geaman said he doesn’t expect a rush for major building renovations as a response to the pandemic.

“In three months from now if we’re in the same situation or things have gotten worse, then maybe,” Geaman said. “In these existing residential buildings, there’s only so much you can do when you’re living in them. It’s going to be a long term, ongoing discussion and evolution.”

In the end, no matter what changes in building designs and operations that are made as a result of the pandemic, human behavior will be the true deciding factor in making the places where people work, play and study safer, said Heinly of Gensler.

“There’s only so much we can do in the built environment to make it a COVID-free environment,” Heinly said.