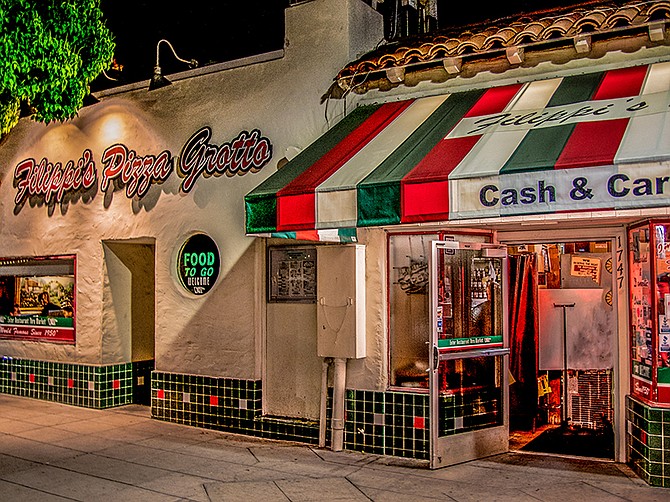 The prospect of a forgivable loan to keep employees on the payroll and cover other expenses was just too good an offer for Filippi’s Pizza Grotto to pass up.

The family that runs the 15 restaurants — which are mostly in San Diego County — was able to line up $962,000 from Wells Fargo Bank in early May to provide income at a time when the COVID-19 pandemic dealt a blow to all restaurateurs. The sum was part of the federal government’s Paycheck Protection Program, also known as PPP, and a wider coronavirus relief effort.

Filippi’s actually took out three loans to support three of its restaurants, said Karen DePhilippis, a member of the family that owns the eateries. The plan, she said, is to use the allowable percentage of the loans for payroll; spend the rest for utilities, repairs and other expenses; and then use restaurant income to cover everything else. Business is “getting better every day,” she said.

There is still work ahead. DePhilippis, like all other loan recipients, have to successfully make the case that their loans should be forgiven.

DePhilippis isn’t disturbed at the prospect. “I’ll get it done,” she said.

Like DePhilippis, small business operators all over San Diego are hoping to make the best of PPP, offered through the U.S. Small Business Administration.

A first wave of PPP loans was quickly snatched up in April, prompting Congress to make a second round available.

Unlike the first round, funding for the second round is still readily available. Banks have been going to community groups -- including those serving underrepresented populations -- email, social media and other outlets to communicate that. A.J. Moyer, president and CEO of C3 Bank in Encinitas, said his team went door to door in the beach community to spread the word.

June 30 is the last day to apply for loans.

As time has passed, the federal government has relaxed rules for loan forgiveness. The covered period has been extended from eight weeks to 24 weeks after the date of loan disbursement, the SBA said.

Under the eight-week scenario, recipients would have to use the loan to pay employees in March. The extension to 24 weeks benefited businesses such as dental offices, which by law were shut down that month, said Nathan Rogge, president and CEO of Bank of Southern California.

Other loan forgiveness rules have loosened up. Originally the government required that 75% of a borrower’s loan proceeds must be used for payroll costs and 75% of the loan forgiveness amount must have been spent on payroll. Those thresholds have since been reduced to 60%.

“We’re expecting about 90% [of clients] will get loan forgiveness,” he added.

Also under the new rules, loans issued on June 5 and thereafter mature at five years.

The government estimated earlier this month that it provided more than 4.5 million loans totaling more than $500 billion to small businesses.

“We saw the program make a big difference in the majority of cases of the people who got it,” said C3 Bank’s Moyer. “A lot of small businesses that needed liquidity got it.”

Bank of America reported that in San Diego alone it funded 5,900 applications for nearly $500 million in loans. The average loan size was $85,000.

C3’s Moyer said he made loans to a variety of small businesses, including screen printers, flooring companies, retailers and hotels. “You name it, we probably did it,” he said.

Umpqua Bank made 112 loans to San Diego County businesses for a total of $53.3 million, said Stephanie Bitters, director of SBA lending at Umpqua’s regional office in La Mesa. “In a troubling time, it was gratifying to help the community,” said Bitters, who has a 30-year history handling SBA loans.

Several bank representatives said they publicized the availability of the loans to minority owned businesses.

Community banks and credit unions did a good job in making money available to the Black community, said Donna DeBarry, a small business owner and CEO of the Central San Diego Black Chamber of Commerce. (The chamber, by the way, is raising money for relief grants that will go to Black businesses that were unable to get PPP loans.)

Looking ahead, DeBarry said she feared members of her chamber may not be able to get loans forgiven because there is too little understanding of government guidelines, including how the government wants loan use to be documented. Many Black and Brown businesses who received PPP funds do not have the office managers, bookkeepers and payroll systems to produce the documentation that might be required, she said.

The need has never been just for liquidity. Business owners have had a hunger for information about their loans.

Wells Fargo’s Bernstein said his bank recently hosted a conference call about loan forgiveness for more than 200 recipients in San Diego. Loan clients need something akin to a nautical chart. “They need to be meeting with bankers so they’re getting the right information to navigate through this time,” Bernstein said.

In future months, the conversation will turn more toward loan forgiveness. Through a spokeswoman, Bank of America said it plans to work with its borrowers by taking a “unified, comprehensive approach to ensure our clients have the information, tools and resources needed to complete requirements as set by the U.S. Treasury and SBA.”

Bankers have stories of employees working all night to get loans made.

Some of the loans turned out to be so small that they didn’t pencil out for the lenders, said Bank of Southern California’s Rogge. Then again, the effort to get the loans out into the market was worthwhile.

“I do believe we’ve gotten new relationships because of the PPP program,” Rogge said. “I think that’s where the value is.”

In other news, the SBA on June 15 reopened applications for Economic Injury Disaster Loans (EIDL) and advances on such loans.