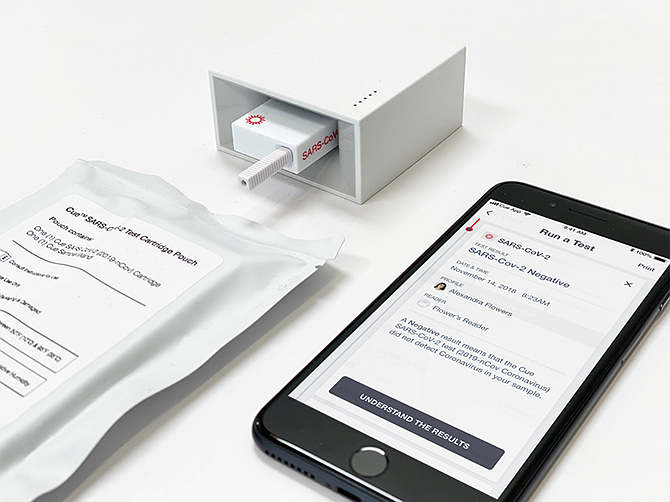 Fresh off of its announcement of $100 million in series C funding, Cue Health Inc. said on June 12 that it received emergency use authorization for its rapid, portable, molecular point-of-care test for COVID-19.

The U.S. Food and Drug Administration approved the test for use under the direction of qualified medical personnel. Cue’s test detects the ribonucleic acid (or RNA) of SARS-CoV-2, the virus that causes COVID-19.

“We are very happy to receive emergency use authorization from the FDA,” said Cue co-founder and Chief Product Officer Clint Sever. He noted that widespread testing will help the business community get back to work this summer.

The FDA’s move makes the test available to hospitals, nursing homes and drive-through testing centers. Companies wanting to test their employees for COVID-19 will be able to get the test through qualified health care professionals, Sever added.

Cue is based in Sorrento Valley, and has a factory there.

The COVID-19 test starts with a swabsample taken from the lower part of a person’s nose. Company officials say the Cue system produces results in 25 minutes.

That system includes a cartridge reader and specialized disposable test cartridge, made for whatever disease the user wants to detect. The test cartridge includes a swab for collecting. Once a sample is collected, a person inserts the cartridge in the reader. The reader, once finished with its analysis, transmits test results to the screen of the user’s mobile device via Bluetooth radio technology. “In the longer term, we want to expand the platform into the home,” said Sever, saying that is a topic of ongoing conversation with the FDA.

Backers Include Johnson and Johnson

With the funds, Sever said, the company hopes to augment its workforce of about 100 people, hiring engineers, software writers and production and operations staff. The business’ manufacturing facility takes up 55,000 square feet.

Cue traces its roots back to the Swine flu outbreak of 2009-2010. It was then, Sever said, that he and CEO Ayub Khattak watched the situation unfold and saw the need for a product. What the world sees now is the result of 10 years of work, the executive said. He said Cue is the first company for him and his business partner.

The business received $30 million in BARDA funds in 2018. The goal at the time was to develop test cartridges for detecting influenza and respiratory pathogens. Cue is still working to bring a flu test to market.

Asked about competitors, Sever said that at this point in the COVID-19 pandemic, all testing technologies are important. “I think anything we do today is a net positive for the country.”

One defining factor for Cue is speed. The company sets itself apart from other home test collection kits by saying that the competitors require a person to send a sample to a lab to get processed. That takes time.

Cue’s test platform costs a few hundred dollars per reader, Sever said, while the cartridges are on par with other molecular tests, costing tens of dollars. “The key guiding principle is we want to make this product super accessible,” he said.