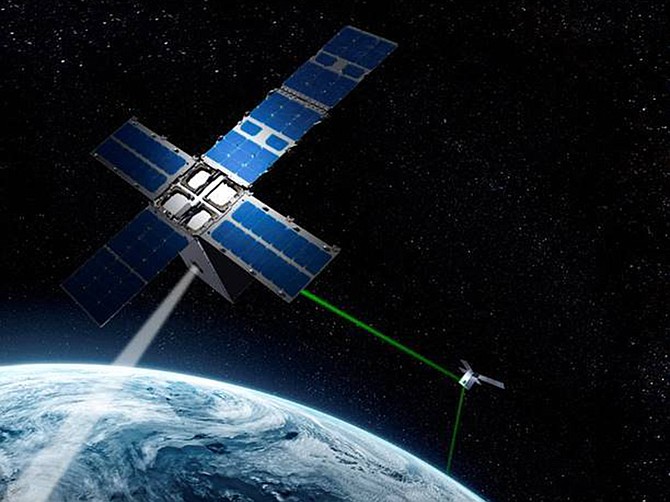 General Atomics and Space Micro Inc. are forging ahead to improve communications in space as part of separate efforts.

These contractors and others are working to get satellites to exchange data with each other via laser light. The same technology will be able to link satellites with unmanned aircraft or terminals on the ground, said David Strobel, Space Micro’s CEO.

Microwave radio is the most common way satellites communicate. The advantage of laser communication is that it is more difficult to intercept, Strobel said. Lasers have another advantage over microwave radio in that they are not as easy for an adversary to jam.

Authors of a 2019 study by Acumen Research and Consulting claim the market for optical satellite communications will experience a 31% compound annual growth rate and surpass $2.92 billion by 2026.

Optical satellite communication technology has both military and commercial uses.

GA’s Electromagnetic Systems business announced on June 5 that it will test laser communications between two miniature satellites expected to be launched in March 2021. The experiments will be held in partnership with the U.S. Space Development Agency. Financial terms of the contract were not disclosed. It likely falls below the $7 million threshold of publicly disclosed Pentagon deals.

The GA satellites will be so-called 12U cubesats; such satellites measure about 8-by-8-by-12 inches apiece. GA said it is designing, developing, integrating and testing the satellites in its own factories in San Diego and Huntsville, Alabama. Both mini-satellites will host an infrared payload as well as a laser communication terminal payload.

The laser used will be a 1,550 nanometer wavelength laser, which emits light in the infrared part of the spectrum.

“This will be one of the first Department of Defense contracted efforts to develop and deploy a state-of-the-art 1550nm LCT [laser communication terminal] to test capabilities to increase the speed, distance and variability of communications in space,” GA said in a statement.

GA will provide mission control from Colorado and Alabama.

Data rates will likely be up to 5 gigabits per second at ranges up to 1,550 miles (2,500 kilometers), GA said. That is five times as fast as the 1 gigabit per second service offered by the terrestrial cable providers. GA also said its terminal could support distances up to 4.500 kilometers or 2,790 miles — about the distance of a coast-to-coast trip in the continental United States.

General Atomics is privately held and does not disclose revenue. Its Electromagnetic Systems business has been placing a greater emphasis on space in recent years.

Cubesats are made up of modules measuring 10-by-10 centimeters (roughly 4 by 4 inches),

Earlier this year, Space Micro announced a two-year, $3 million deal from the U.S. Air Force Space and Missile Center to develop a way for satellites to communicate via laser. If all goes well, the business could receive a follow-on contract to get the technology into orbit.

It sold the Air Force on the project in November, during a quick pitch event in San Francisco.

Strobel said his communications technology could reach data rates of 100 gigabits per second — up to 25 times faster than GA’s technology — and 200 gigabit speeds are possible. The technology is capable of serving satellites separated by more than 7,000 miles (12,000 kilometers), making it appropriate for geosynchronous orbits. At such an orbit, a satellite travels at the same rate as the Earth turning beneath it, so it seemingly hangs in the air over the same spot.

Space Micro is using parts originally meant for laser communications on Earth. Strobel said the parts were tested to determine their suitability for space missions.

There is also commercial interest in Space Micro’s technology. It is scheduled to be launched with an undisclosed customer’s satellite on a commercial mission in the middle of June, the executive said. The satellite will be on a Vega rocket launched by Arianespace in French Guiana, South America. The launch was planned for March, but the COVID-19 pandemic delayed it.

Space Micro is on track to do $20 million in revenue this year and has nearly 100 employees, Strobel said. It had no layoffs during the pandemic, he added.

NASA has already achieved laser communications in space, Strobel said in a March interview, though the executive said the NASA solution is expensive.