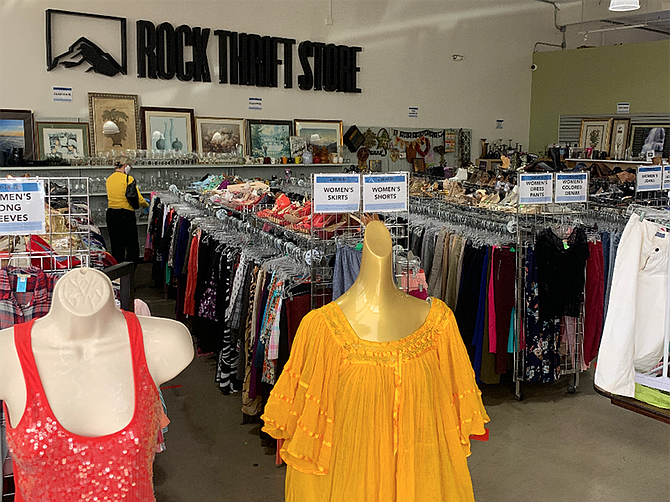 Photo courtesy of Rock Thrift Store. Since the pandemic, the Rock Thrift Store has experienced not only an uptick in donations but also in the number of shoppers it has welcomed since reopening May 22.

This year, since COVID-19 hit in mid-March, the donations have continued – and, in most cases, increased – but, due to the mandated closures, sales came to a screeching halt.

Now, with an unprecedented yet welcomed amount of accumulated inventory and some of the community members being more conscious of their spending due to the crisis, The Salvation Army, and other secondhand stores around town, are counting on fully stocked shelves to rapidly increase revenue, bring back more staff, and, for some, continue to reopen stores.

Since reopening two out of its seven locations – Poway and Point Loma – on May 22, Major Henry Graciani, commander of the Adult Rehabilitation Centers Command for The Salvation Army, said sales have been better this year when compared to the same weeks the previous year – even considering less people are shopping these days.

“We believe that is because of not only pent up demand, but also well stocked shelves due to the abundance of donations that were dropped off during COVID-19 with nowhere to sell those items during the lockdown,” he said, adding that the East Village headquartered corporation had an operating budget of $8 Million in 2019. “Our distribution center is full and we are able to keep the shelves and racks stocked with fresh merchandise.”

Graciani said the goal is to generate some initial income to rehire the necessary staff to open and operate its other stores and donation sites. He said as part of The Salvation Army’s phased opening efforts, the Escondido store was scheduled to open on May 29. A date for the reopening of the remaining four has yet to be set.

Since the pandemic, he said the 9,000 square foot facility, located in Point Loma and with a revenue of $500,000 in 2019, has experienced not only an uptick in donations but also in the number of shoppers it has welcomed upon reopening May 22.

“Customers seem very happy to be back in the marketplace and we are very pleased with their response so far,” he said. “This is better than we hoped, and we are encouraged. We would consider this a significant uptick in donations. It appears some donors have made good use of time at home by doing some spring cleaning.”

Mei Ling Nazar, spokesperson for the Rock Thrift Store, said secondhand shopping might offer the best of both worlds during the crisis. She said while people may have a need to buy goods, mainly because they are stuck at home, they still need to be budget conscious.

“People have lost their jobs and have had their budgets cut,” she said, “so now they are looking for more creative ways to get things.”

Toni Giffin, CEO and president of Goodwill Industries of San Diego County, said the company has also experienced an increase in donations since the novel coronavirus first emerged. This is despite implementing a touchless donation system at its 17 drop-off centers and 33 retail stores across the county, which the company initially feared would turn donors off.

“With the ‘stay at home order,’ many households have taken the time to declutter their homes,” she said. “We have seen an increase in donations from community members.”

And, although running at 50% capacity, Darlene Cossio, head of marketing communications at Goodwill Industries of San Diego, said since opening nearly 20 of its stores starting May 21, they have been busier than expected.

“The traffic is quite heavy,” she said, “and we are very thankful the community is returning to us.”