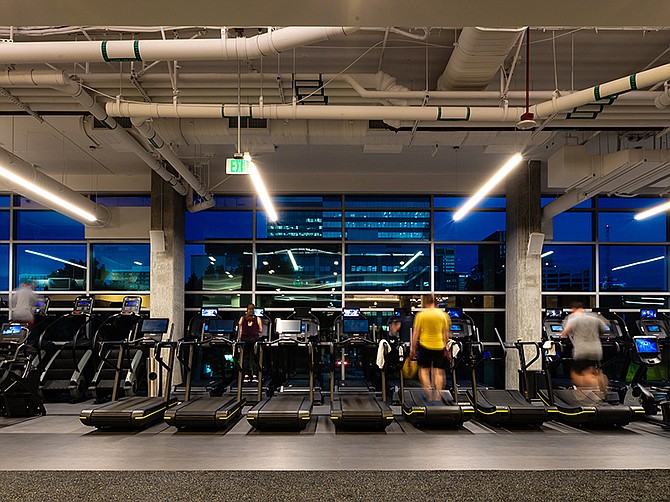 At the end of May, Governor Gavin Newsom announced his administration would release guidelines for reopening gyms “in a week or so.”

Now, in anticipation of getting back to business in the time COVID-19, fitness facilities around San Diego are ramping up their sanitizing and distancing efforts – as well as increasing their maintenance expenses, as a result – to make sure their clubs are safe enough for their staff and members to return.

Scott Lutwak, CEO of Fit Athletic Club, headquartered in downtown San Diego and with five locations throughout the county, said he is implementing a three-step process with the use of a non-toxic, EPA-approved chemical called Hi-Con PF that kills viruses, including COVID-19, and bacteria.

“Fortunately, other operators and markets that opened clubs before us have given us really good references on chemicals and things that are working out at their gyms,” said Lutwak, referencing a networking group called the California Fitness Alliance, which he is a part of and is working on making all fitness centers essential moving forward.

“We have implemented a three-step process through which, nightly, we will fog the entire gym with a chemical that kills viruses and bacteria. All the wipes that we have for everyone to clean the machines post-use will also have the same chemical. And, employees will walk around with spray bottles that will contain the chemical as well.”

Lutwak said, as a result of the new procedures, he expects his maintenance expenses will increase by 25%. This will not affect the pricing of its memberships at the time, he said, adding that Fit Athletic’s revenue in 2019 was approximately $16 million and was expected to increase to $20 million in 2020, before the crisis hit.

Another system Lutwak’s put in place for reopening is having members book their workouts ahead of time through the use of an app. This will help control crowds and maintain physical distancing at any given time, as he anticipates gyms across the county will be capped at 25% of the total capacity when orders are passed.

Still, he’s looking forward to opening back up, albeit limited, sometime this week or, at the latest, before mid-month.

Cory Brightwell, CEO of Mission Valley-based Chuze Fitness, with seven centers in San Diego and revenue of roughly $54 million in 2019, said he believes his expenses will increase about 50% as it pertains to cleaning supplies.

“We are absolutely going to be experiencing a higher cost as it relates to disinfecting and keeping facilities clean,” he said. “This will be primarily driven by the products we are using now more frequently and the products members are going to use more frequently. Members at large will be more aware of cleaning equipment and sanitizing hands.”

Brightwell said Chuze will employ the use of electric static sprayers to more effectively disinfect surfaces on a nightly basis. The company has also begun using a product called Virex, he said, that kills microorganisms on surfaces. He said the club has always prided itself in being a hospitality brand more so than a typical fitness brand and, as a result, has always placed heavy focus on cleanliness at its 30 facilities throughout San Diego, New Mexico, Arizona and Colorado.

So, this is just par for the course, said Brightwell.

Now, he and his team of about 400 in San Diego are just making sure they have enough supply at all times to amplify those procedures.

Tim Suski, co-founder of Little Italy-headquartered Rush Cycle, with five locations throughout the county and 24 in the nation, said his main focus as a cycling center is creating the physical distance necessary to prevent the spread of the virus.

“We are going to be heavily impacted by social distancing and what that means,” said Suski, who founded the company in 2011 and has about 54 employees locally between corporate and workout facilities. “We’ve had about three studios open back up in Texas and each one has brought back about half of the bikes to be respectful of social distancing. Another precaution we are taking is that if people are not ready to come back to the studio, we are telling them to keep their bikes at home. Studios will probably run at 50% capacity to start.”

During the lockdown, Rush Cycle rented out some of its bikes and provided digital content for members to use at home, said Suski. And, while that was an interim solution when the pandemic started, those members are now being encouraged to stay in the comfort of their homes if that is their desire.

For those members that are wanting to return to the studios, which are roughly 2,200 square feet in size, Suski said they will provide around 21 bikes instead of the typical 43. To make up for the limited capacity per class, Rush Cycle gyms have extended their hours of operation and have added classes to the schedule, he said.

Suski anticipates Rush Cycle studios will open by the end of June or early July.