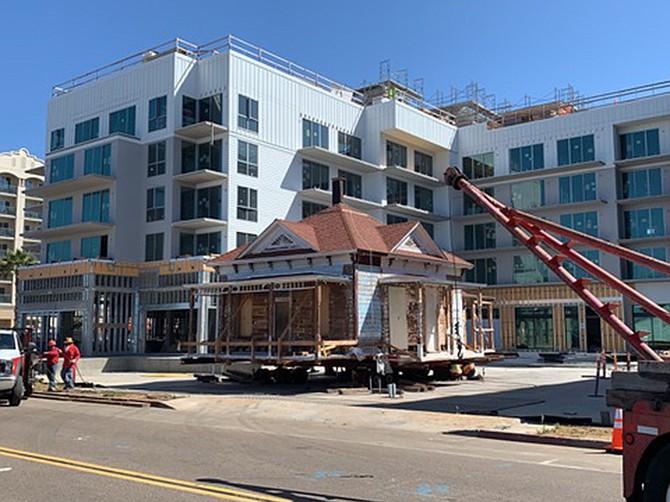 Oceanside’s Top Gun House — named after the 1986 movie “Top Gun” starring Tom Cruise and Kelly McGillis — has been restored and taken its place as part of a $180 million beachfront hotel project.

Part of the movie was filmed in the house.

“I have no doubt it will become an iconic attraction, “ said Jeremy Cohen, senior vice president of S.D. Malkin Properties based in San Diego and Greenwich, Conn. “It will be a kind of not-to-be-missed attraction as part of a visit to North County San Diego.”

Built in 1887, the Victorian-style home previously known as the Graves House for the man who built it was moved in late May to the 2.8-acre site of the dual-hotel project by S.D. Malkin at the foot of Mission Avenue between North Pacific and Myers streets.

“We felt from the beginning, it’s hard to find a piece of 1887 Southern California coastline that you can preserve, let alone one that has a fun moniker folk history to it with its role in “Top Gun,” Cohen said. “We thought it would just be a wonderful addition and part of the fabric of the city. Having this as part of the fabric of hotel was celebrating the city’s past and complementing its future.”

The Oceanside Beach Resort hotel project was topped-off at the beginning of the year and is more than half finished, with an opening set for spring 2021, Cohen said.

The development consists of two hotels — the 161-room Joie de Vivre Boutique Hotel on the north block and the 226-room Destination Hotels resort on the south block.

The seven-story Joie de Vivre will include a roof-top pool and bar, a luxury restaurant and 3,000 square feet of retail shops.

The six-story Destination Hotel will include a restaurant, bar and lounge, library, spa, and more than 20,000 square feet of meeting rooms and event rooms and will be topped off with a 9,000 square-foot elevated deck.

The Top Gun House was moved from its original site in February 2019 to a nearby lot to make room for the hotels, which wrap around it in its new location.

The house itself is free-standing.

Much of the restoration needed to save the house was done before it was moved to its final location.

The Top Gun house had so deteriorated that much of it had to be rebuilt.

“We structurally renovated and replaced all of the rotted-out timbers, which were extensive,” Cohen” said. “There were additions to the house that had to be removed that weren’t historic.”

A chimney still has to be rebuilt and the house has to be repainted from its fading blue to colors that approximate its historical appearance.

Interior renovations will depend on who leases the house.

“We’ll be looking for a suitable tenant that will be something that’s accessible and really fun for the public,” Cohen said. “Ice cream is something we’ve talked about.”

When finished, the restoration will likely have cost about $1 million, Cohen said.

Leslie Gaul, CEO and president of Visit Oceanside, the Top Gun House was a tourist draw even before its restoration, calling its move to the hotel site a bright spot during a time when the tourism industry has been devastated by the COVID-19 pandemic.

Cohen said the pandemic hasn’t cause any serious problems in construction of the hotels.

“We haven’t been free of issues but so far, nothing that’s been catastrophic, but we’re not out of the woods yet,” Cohen said. “So far, we’ve been fortunate.”