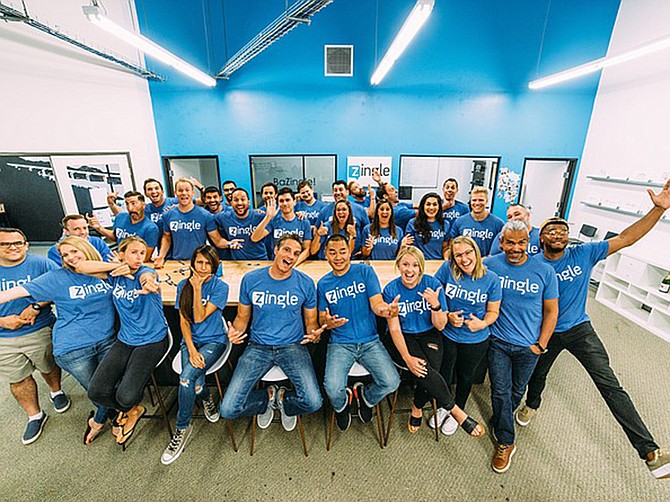 With schools and workplaces across the country closed, there’s been a significant spike of people seeking better online tools and resources as society has drastically shifted online.

For more than two years, human-I-T has been in collaboration with the local company Zingle, and the power of the partnership has accelerated since the pandemic.

Founded in 2012, human-I-T is a multifacility operation with a team of 50 working to disrupt the $40 billion global e-waste and recycling industry. Human-I-T does that by reusing instead of recycling electronics. The company changes e-waste into opportunity

Typically, the nonprofit receives around 1,700 inquiries a month from families looking for internet access or low-cost technology devices. There have been more than 14,000 virtual inquiries, since the beginning of the crisis.

“With schools and workplaces across the country closed in light of COVID-19, this divide has grown wider as record numbers of individuals find themselves without the tools they need as society has taken a drastic shift online. We’ve seen a massive increase in demand for our services,” said Middleton.

The demand ranged from individuals seeking computers for their child’s tele-learning programs to lower cost internet for the elderly’s virtual doctor visits as well as medical care without the risks of in-person visits. Overall, the feedback on the efforts has been overwhelmingly positive.

A client who was recently outfitted wrote in email, “Living in the digital age, it’s vital to own a computer and have access to the internet. Human-I-T has given me access to these resources which has helped me maximize my personal, academic, and career goals and improve my socioeconomic position in society.”

In total, the team, Zingle and human-I-T, has also doubled the amount of internet access they’ve been able to provide since turning to text, and have been able to distribute 11,000 computers in a month.

Headquartered in Carlsbad, the startup Zingle was founded by Ford Blakely and was acquired last year by Medallia Inc., a San Francisco-based software company that specializes in customer experience management, for $42 million. Now as part of large public company, Zingle still remains based in Carlsbad.

“We play a small part in what they (human-i-t) do,” said Blakely founder and CEO of Zingle. “It’s the people that work there on a daily basis who give their time and energy to a really great cause. But when you develop a piece of technology that can enable them to service over 9,000 more homes and families, that didn’t already have internet through COVID-19, it’s definitely a feel good story.”

Zingle has drummed up big clients in the hospitality business, such as Hyatt and Orangetheory Fitness and has gathered over 100 million messages on its platform.

Most notably, Blakely, who formerly worked in finance, launched the startup on the tail of the financial crisis with the early idea that customers would want to text businesses instead of calling them over the phone.

Zingle had its first breakthrough in 2015, when Facebook decided that its messenger app should also connect to businesses. Zingle was named one of Facebook’s early partners.

Unlike other business texting service or chatbot, Zingle can pull information from multiple sources, create maintenance or service tickets, and uses natural language processing to continually improve its understanding.

Like most industries, business has slowed due to the widespread closures and government-ordered restrictions around the world. Although, the company has seen significant “uptick” in interest for its solutions as curbside pick-up becomes the new normal for retailers.

“If you open up the newspaper, you will read that curbside service is the new medium for retail,” Blakely said. “I can’t think of a better fluid communication where texting and messaging helps facilitate that.”

In today’s digitally focused world, the company is betting that most major retail franchises will have a texting option. For example, big box retailer Home Depot can now utilize its platform as a complement to its curbside commerce strategy.

Well-positioned for this emerging market and evolving landscape, Blakely predicts for at least the next 12 months, businesses will find creative and innovative ways to keep moving on.

“We are all incredibly sympathetic to those that are severely impacted not just financially but also from a health perspective,” Blakely said. “As Warren Buffett once said, I’m always going to bet on America. As a country, we’ve always seem to have these really scary moments, but we always seem to find the grit, find opportunity and pull through it. Pain can be somewhat of a forcing mechanism for people to help find the silver lining and figure out where they can go next.”