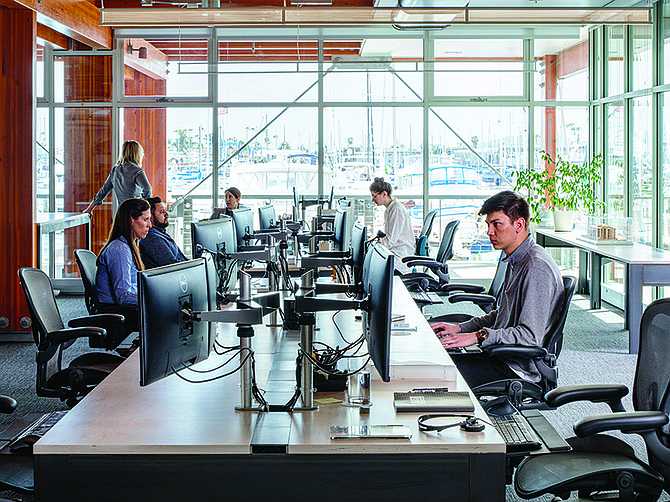 Photo courtesy of Miller Hull. Miller Hull was recognized for producing a work space designed around its staff’s health and happiness.

A $1.7 million renovation of a San Diego architectural studio is the first in Southern California to be awarded certification as exceptional in its use of energy, synergy with its surrounding environment and overall beauty.

The architectural firm Miller Hull Partnership also was cited for its use of environmentally-friendly materials and producing a workspace designed around its staff’s health and happiness in winning the coveted Living Building Challenge Petal Certification from the International Living Future Institute based in Seattle.

“The idea of sustainability is at the core of who we are and what we do,” said Benjamin Dalton, a principal of Miller Hull.

Renovating its own studios to be environmentally sustainable was “the right thing to do,” Dalton said, but it also serves as a showcase for potential clients.

“We want to bring the opportunity of sustainability to this area and really lead that effort to be responsible to the environment in building responsibly,” Dalton said.

The Living Building Challenge certification is similar to the more familiar LEED building certification for energy conservation and overall concern for the environment.

A big difference is that LEED certification is based on a building’s projected performance and certification in the Living Building Challenge is based on a building’s actual performance in its first year, said Beth Heider, vice chair of the Living Future Institute and chief sustainability officer of Skanska USA, a multinational construction and development company based in Sweden.

“The Living Building Challenge as it evolves continues to raise expectations of what a project can be,” Heider said, adding that “Miller Hull has been a leader in sustainable design from its earliest days.”

“The fact that they have made a commitment to building their own studios out to the Living Building Challenge is a huge thing,” Heider said. “It’s not easy to do. It requires a terrific amount of corporate courage to say we’re going to take the time and make the financial investment that’s necessary.”

The Living Building Challenge has been around for about 15 years, but Miller Hull’s San Diego studio was certified under the updated version of Petal Certification with standards that are more stringent than earlier versions, Heider said.

“The fact that this was the first project that was certified under the most challenging version of the challenge also is pretty incredible, Heider said. “One of the other things that’s really cool about this project is that it’s really beautiful.”

Located in The Wharf at Point Loma Marina, Miller Hull’s studio is in a building that was originally designed by one of the founding partners, the late Robert Hull.

The building is owned by GB Capital.

“They were nice enough to let us do some interventions that maybe some others wouldn’t,” Dalton said, including installing a 24 kilovolt photovoltaic solar array on the roof.

“That allowed us to become a net zero office,” Dalton said.

In its first year in the renovated studios, Miller Hull produced 30 percent more energy than it used, Dalton said.

Part of the 5,000 square feet that Miller Hull leases at 4980 North Harbor Drive was originally designed for a restaurant or catering business, but had never been used.

“The space itself is just really fantastic. We’ve got great views,” Dalton said. “We designed it in a way that the staff work stations and the kitchen have the primary advantage of the views. We’re very close to 100 % day-lit, there’s so much light that comes in.”

“The only cooling we have is a small unit for our (computer) server room. We benefit from being on the water. We benefit from being in San Diego. The climate is pretty amazing. We also have exterior shading on all the glass, so we avoid heat gain from the sun,” Dalton said. “When we moved into the space, there were no operable windows, so we added operable windows to all the spaces.”

Along with meeting energy conservation goals, Miller Hull avoided using any materials that the Living Future Institute has on its red list as environmentally harmful.

They include such commonly used materials as PVC (polyvinyl chloride) pipes.

To gain certification, the firm also had to demonstrate that it has a sense of equity.

That includes having equal pay for all regardless of gender and ethnic background and having no hierarchy in the placement of work stations.

The firm also sets aside time for its staff to do pro bono work and space to display the work of local artists.

“We use our main conference room and gathering space as a rotating gallery,” Dalton said. “The added benefit is that we have amazing art all year in our space.”

Miller Hull had been in the historic Mission Brewery in the Middletown neighborhood and moved toward the end of 2018 but the Living Building Challenge certification came through in early May 2020.

“We had just outgrown our space,” Dalton said. “We doubled our square footage when we moved from there to here.”

Other Miller Hull projects in San Diego County have included a new Science, Math and Engineering Building at the University of California San Diego, the Mesa Commons student hub at Mesa College, IDEA1 mixed-use project in East Village, an archive building in Santee for the San Diego County Assessor, the new San Ysidro Port of Entry, and a new Del Mar City Hall.

The firm also is working on the Center for Coastal Studies at UC San Diego and a multifamily project in National City meant to revitalize the city’s urban core.