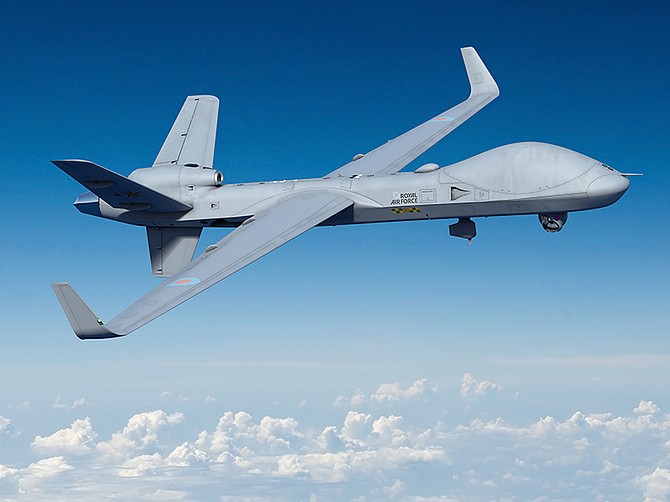 The United Kingdom has signed a deal to buy a new generation of remotely piloted MQ-9 aircraft from General Atomics Aeronautical Systems Inc. Among its upgrades, the unmanned craft has technology that lets it fly not just in war zones, but among other aircraft in civil airspace.

The sale of three MQ-9B aircraft plus ground stations to the Royal Air Force was valued at around $82 million. The buyer has an option to buy 13 additional aircraft, which it will call Protector.

Linden P. Blue, CEO of GA-ASI, called the sale “a major milestone for both the MQ-9B system and the Protector Program.”

The aircraft is derived from GA-ASI’s original Predator and the heavier MQ-9 Reaper, which carries a greater load than the original. The Royal Air Force flies the latter and said the Protector will be the replacement for its Reapers.

General Atomics Aeronautical is using its MQ-9B SkyGuardian model as a starting point. The first aircraft built to U.K. specifications should be finished by 2021 and will stay in the United States for testing, GA-ASI said. The British military said it expects the aircraft to go into service by 2024.

The U.K. Ministry of Defence promoted the buy as “the first U.K. operated system capable of strike missions anywhere in the world.”

The aircraft has nine “hard points” for carrying payloads, including weapons. It will carry weapons systems unique to the U.K. military. In addition, its satellite communications will use a specific radio frequency range known as X-band.

“Protector will be deployed in wide-ranging Intelligence, Surveillance, Target Acquisition and Reconnaissance (ISTAR) operations where its ability to fly consistently for up to 40 hours will offer a vastly improved ISTAR capability,” said Group Captain Shaun Gee, the RAF’s director of Air ISTAR programs, in a statement distributed by GA-ASI.

“Given that it is designed to fly in non-segregated, civil airspace, the Protector RPAS will also be able to support multiple civilian missions, including search and rescue and disaster response missions.”

To be certified to fly in civil airspace, an aircraft needs several things which may not be apparent from its exterior.

MQ-9B’s designers built in fire zone separation, lightning protection, bird-strike protection, fuel/electrical separation, durability and damage tolerance, according to a GA-ASI spokesperson. It also built in a “detect and avoid” system that allows the remote pilot to see and avoid other airborne traffic.

MQ-9B was developed internally by General Atomics Aeronautical. Its effort to build an aircraft to European airworthiness requirements began in 2014. A GA-ASI spokesperson said its overall development cost was hard to estimate.

“The investment is more than financial,” the spokesperson said. “GA-ASI employees have devoted decades of hard work, innovation and passion to the MQ-9B and its predecessors, adding numerous modifications and improvements over time, to create the most sophisticated and reliable remotely piloted aircraft available anywhere in the world. We believe those results speak for themselves.”

General Atomics Aeronautical Systems, based in Poway, is an affiliate of General Atomics, based in the Torrey Pines area. The company is held by members of the Blue family and does not disclose revenue. The aeronautical systems unit alone employs more than 9,000 people.

The U.S. Air Force has a large inventory of MQ-9 Reaper aircraft. The Defense Department has publicly said it is looking for successor technology for its MQ-9s, which could go into service by 2031.

In other company news, the Japanese coast guard is preparing to put a GA-ASI aircraft through two months’ worth of tests, starting in mid-September. The purpose of the flights is to validate the wide-area maritime surveillance capabilities of remotely piloted aircraft for carrying out the coast guard’s missions, including search and rescue, disaster response and maritime law enforcement. The Japan Maritime Self Defense Force will support the flights from its Hachinohe base in Aomori Prefecture, in the north of Japan.