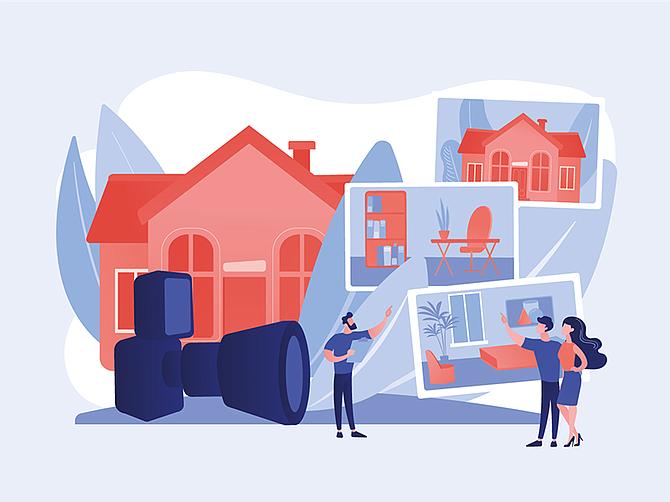 Virtual tours have become a key part of what San Diego real estate agencies use to market homes during the COVID-19 pandemic and are fast becoming the new norm.

They range from simple walk-throughs with agents using cell phones to show clients remotely what homes look like to sophisticated 3-D virtual reality programs that let potential buyers walk through homes remotely as if they were there in person.

Melissa Goldstein Tucci of Coldwell Banker West likened the effect of a 3-D tour that is becoming more commonplace to looking at a doll house with everything there to see.

Tucci said that she does 3-D presentations on every listing and started doing them well before the pandemic hit.

“I saw it and said, ‘oh my God, this looks really cool,’” Tucci said. “Every time I do it for clients, they’re amazed.”

“We push for every listing to have a virtual tour on it,” Burnett said, and these are far from the photo collections agents once used to market property.

Short of smelling chocolate chip cookies baking in the oven, the tours can give buyers the sense of being in a house.

“When we shoot a virtual tour, we want the consumer to see anything and everything that they would be able to see or want to see if they were there in person. That means every room, the basement if there is one,” Burnett said. “It’s as close as you can get to walking through a house without walking through a house.”

Most agents were using some version of virtual tours before the pandemic, but those that weren’t have embraced the technology and those that were have stepped up their use and opted for higher-tech versions.

Jason Barry of Barry Estates and Jason Barry Team in Rancho Santa Fe said he was using virtual tours before the pandemic and uses them even more since.

“It’s been very effective and productive for us,” Barry said, adding that he has sold about six homes in the $2 million to $5.5 million range since the pandemic started based solely on virtual tours.

Barry said he uses 3-D tours on occasion, but prefers to do videos or virtual open houses in which he will lead prospective buyers through a house using a cell phone or with a professional photographer.

Denisse Roldan Newell, immediate past president of the San Diego Chapter of the National Association of Hispanic Real Estate Professionals, said that when the pandemic hit, “everyone started going virtual, the whole world really.”

“It’s the only way to sell nowadays,” said Newell, a realtor with Axia Real Estate Group in Mission Valley. She said she routinely relies on Zoom and Facebook to give virtual tours to clients using her cell phone and uses more sophisticated 3-D software on some listings.

“I was selling a home in La Mesa and I was representing the seller and many of the agents that came through were doing the walk-through for their clients through Facebook Live,” Newell said. “Within a week, we had multiple offers.”

The California Association of Realtors has recommended that all agents use virtual tours during the pandemic to limit the possible exposure of buyers and sellers to COVID-19.

“With the pandemic, it became even more clear they are here to stay,” Blaylock said, adding that Berkshire Hathaway agents had been using virtual tours prior to the pandemic.

“This has grown exponentially in practice and also allows more efficiency and a safe way to view properties,” Blaylock said. She said most listings have a virtual tour and video tour.

If they don’t, Blaylock said agents can walk through a home with a client on a video call.

“Virtual tours have always been there but we were just never dependent on them,” said Carla Farley, owner of Corban Realty Group and president of the Greater San Diego Association of Realtors.

“Now, in the pandemic, of course, anyone who wants to do any kind of business, you have a new skill set,” Farley said.

Pre-pandemic, pricier versions of virtual tours that took people right inside the house where they could walk through, look up and down, check the floors and ceilings and roam from room to room were used more sparingly than they’ve been since the pandemic started.

“You would see them on the higher income but not on the middle income. You just didn’t see it that much,” Farley said. “Now, you’re seeing it on just about everything.”

The cost of doing virtual tours has come down as more agents use them.

Typical costs, according to many agents, range from about $250 to $500, although at least one agent reported prices of under $200.

No Furniture, No Problem

“Space-wise, it can be critical,” Farley said. “When you look at an empty room, you go, ‘well, my bed wouldn’t fit in here’ and actually it does.”

While some agents like Barry report selling a few homes “sight unseen” through a virtual tour, many said that a personal walk-through is needed before a sale is finalized.

Agencies who work in South County and deal with many military clients are more likely to sell a home based solely on a virtual tour.

Yvonne Cromer, a real estate agent with Compass and a board member of the Pacific Southwest Association of Realtors, said she uses virtual tours to put buyers in the house as if they were really there.

“It’s worth the expense,” said Cromer, whose specializes on South County real estate.

“We were doing it before here in the South Bay. We have a lot of military buyers and a lot were on deployment,” Cromer said.

Touring many homes in person just isn’t practical for many in the military, Cromer said.

A benefit cited by many agents is that the virtual tours cut down the number of lookie loos they deal with – people who aren’t serious buyers but that pre-pandemic made the rounds of open houses for entertainment or out of curiosity.

“The days of lookie loos just looking at homes to check them out I think is going to become a thing of the past,” said Eric Matz of Windermere Homes & Estates.

“I do them for every house, I don’t care if it’s a two-bedroom condo,” said Matz, who specializes in Poway. “The consumer’s asking for 3-D videos because they know nothing’s been photo shopped, nothing’s been changed,”

Even so, Matz said he wants buyers that he represents to take an in-person tour before closing.

“The technology is awesome, better than maybe it’s ever been before, but it’s still not like coming into the house and seeing it with your own eyes, seeing the neighborhood, seeing where the trees are, “Matz said.

Ramon Maldonado, who heads the Maldonado Team of Compass real estate in La Jolla, said he uses virtual tours to cut down on traffic going through homes he’s showing, especially in homes that are occupied.

“The less people in the house, the better for the owner and everybody to stay safe,” Maldonado said. “With the vacant ones, it just depends on the property because with vacant property, you have more access to them.”

Pre-pandemic, Maldonado said he tended to use video tours on homes selling for $2 million or more, adding that, “We’re using those tools for all price points now.”

Wendy Purvey, COO of Pacific Sotheby’s International Realty in Rancho Bernardo, said her company stepped up agent training in the early days of the pandemic when nothing was moving, including learning how to use virtual tours.

“We were teaching and training and using this downtime like crazy,” Purvey said. “This is forcing even the least tech people to use technology, otherwise they can’t do business.”

Purvey said buyers and sellers also are using virtual reality in their own businesses and personal lives, so they expect it from real estate agents when they go to buy or sell a house.

“I think we’re going to have some permanent changes,” Purvey said.

Roxana Said of Pacific Sotheby’s International Realty said that she offered virtual tours on her social media sites prior to the pandemic but does so far more now.

Angela Avilez, vice president of Century 21 Award for Southern California based in Mission Valley, said virtual tours aren’t new but “nothing was as robust as it is right now.”

“The pandemic has really forced us to embrace different tools, the virtual experience, as part of real estate,” said Avilez, who is a realtor with Cardenas and Company.

The pandemic “really rattled and disrupted what the normal was, “Avilez said, adding that she provides virtual tours on every home she lists.

She said Century 21 agents have sold homes based solely on virtual tours.

“The virtual tours, they basically weed out and prioritize what people really want and it brings to the table the serious buyer,” Avilez said.

Jamie Duran, president of Coldwell Banker Residential Brokerage Southern California, said Coldwell agents had been trained in virtual tours and were using the technology prior to COVID-19, although it’s up to individual agents how sophisticated they want to get with the virtual tours they use, from simple presentations to the 3-D versions.

“We never skipped a beat when COVID hit because really, our technology was already in place,” Duran said. “Moving forward, everybody should be doing them (virtual tours) in some form. It’s just so much more visual today with everyone going online.”

Sellers just expect it as a routine part of marketing their homes, Duran said.

“I just don’t think you can afford to be camera shy or virtual shy anymore,” Duran said.

Linda Moore, a Realtor with Coldwell Banker Residential Brokerage in Encinitas, is one of those who has stepped up her use of the technology Coldwell offered when the pandemic hit.

Moore said that she used virtual tours sparingly before the pandemic because prospective buyers would schedule an appointment to tour homes in person. She said she has since come to rely on them.

“I’m using them on every one of them now unless the seller doesn’t want it,” Moore said. “I think they’re very helpful for every property.”

Miguel Diaz with Douglas Elliman Real Estate in Mission Valley said nearly all of his clients want to tour homes using cell phone applications in which Diaz will walk through a house with the clients following his progress on their phones or computers.

“It’s real time,” Diaz said. “I’ll start outside of the home. I’ll give them, a look of the street, the neighborhood. I do a walk-through starting with the front door. We’ll stop in very single room. There’s conversations happening. Sometimes they’ll have specific questions, like what is the floor, what is the countertop.”

Diaz said 3-D virtual tours, which were offered for their “cool factor” prior to the pandemic, have become “the new normal.”

Nationally, the online brokerage and listing agency Zillow reported that 86 percent of agents it surveyed in July used virtual tours and 72 percent said they would keep using them when the pandemic ends.

“This has become a really effective marketing tool for agents. Agents have been really quick to adapt,” said Amanda Pendleton, Zillow communications manager.

Pendleton said that prior to the pandemic, agents were slower to adopt virtual tours.

“This kind of kicked it into high gear,” she said.