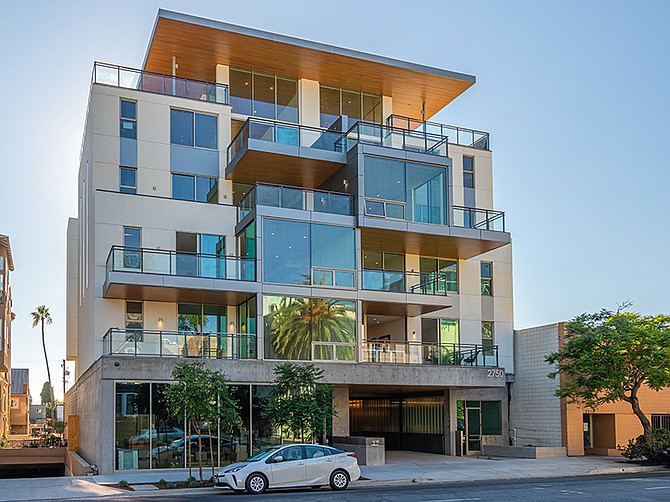 A Bankers Hill condominium project that’s just coming to market has a few special design touches because it’s built on two parcels of land that each have different zoning restrictions.

The result is that the $20 million project at 2750 Fourth Ave. that stretches between Third and Fourth avenues at Olive Street is taller on one side than the other and had to include commercial space on one side but not the other.

Rather than pose a difficult obstacle, the differing zoning requirements on the two lots gave architects a chance to play with the design, said Taal Safdie, a founding partner with Safdie Rabines.

“It’s been fun,” Safdie said. “We’re very happy with it. It’s in the city and it feels like a good infill project that tries to take advantage of everything the site has to offer.”

In the project description posted on their website, Safdie Rabines wrote that the mixed zoning “allowed the team to conceive of a design that allows each residential unit ample private outdoor space and floor-to-ceiling windows, providing natural light, ventilation and views.”

“You can’t tell from the outside that there are two zones,’ Safdie said.

Safdie said it’s not all that unusual in San Diego to have property like Garlands that combines lots with differing zoning requirements.

“When you do a house on a canyon, sometimes the top part of the canyon is one zone, when you get down into the canyon, it’s a completely different zone,” Safdie said. “It does shape the project.”

In the case of the Bankers Hill project, Safdie said the design took advantage of the taller height limits on the east side of the building to have two, two-story penthouses with high ceilings “with fantastic roof decks.”

On the west side, the zoning required larger setbacks so the building is a little farther back from the street.

Garland said he didn’t seek a zoning change on the property because it would have been costly and time consuming. He said the project is “what they call in the market a jewel box. It’s a pretty little development.”

There also are what Garland said were “two junior penthouses” of about 2,000 square feet that go for about $2.4 million to $2.5 million.

Garland said he took special care in the materials he selected for the project, importing stone from Turkey and wood from China for the flooring.

The lighting and heating and air conditioning for each unit can be set with a smart phone.

“You can program it six ways to Sunday,” Garland said. “It’s really got a lot of bells and whistles.”

Opening in the middle of a pandemic hasn’t posed any lasting problems, Garland said, although it did initially.

“We started marketing earlier this year on a very preliminary basis but had some good interest,” Garland said. “With the COVID hitting in March, our phones stopped ringing into February, into March, into April. At the end of April, they started ringing again.”

His market for buyers is “all over the map,” Garland said.

Of the offers he’s received, two have been from older couples and two from people in their 30s who work for high-tech companies.

Looking ahead, Garland said he’s looking at property along El Cajon Boulevard and on Adams Street for multifamily micro-units and a 40-acre site in North County for a single-family home development.