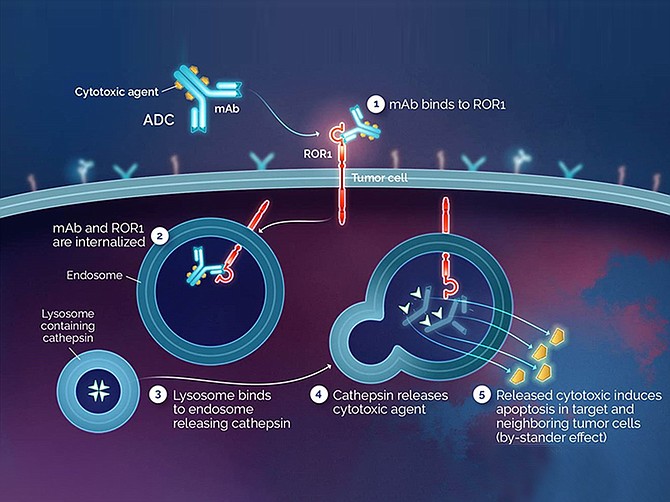 San Diego-based VelosBio, a company which is developing an antibody-drug conjugate that goes after a target of growing interest, has raised $137 million from venture capitalists.

Founded in 2017 by industry veterans, VelosBio’s goal is to develop a novel, first-in-class, ROR1-directed therapeutics to transform the lives of patients with cancer.

VelosBio is led by CEO Dave Johnson, the former chief executive of Acerta Pharma, which was acquired by AstraZeneca in 2015 for $4 billion, plus $3B in potential future consideration.

Johnson stepped up to the role at VelosBio after acquiring the rights of UC San Diego physician and cancer researcher Thomas Kipps’ work. The protein Kipps has been focused on, identified as ROR1, is expressed on cancer cells but not normal healthy tissues. VelosBio’s lead drug candidate, VLS-101, targets cancer cells that express ROR1 while sparing healthy cells.

In 2018, VelosBio joined the Johnson & Johnson JLABS incubator in San Diego. During that time, the team created its lead candidate, the antibody-drug conjugate VLS-101. The company is currently running a Phase I study in patients with lymphomas and leukemias.

In particular, VLS-101 works by “linking” together an antibody and a cancer-killing “payload” with the intention of making delivery of a cytotoxin more precise.

“In less than a year from founding the company. We have moved rapidly from just an initial idea, to developing the first construct, to getting the green light from the FDA to completing our first phase I human trial,” said Johnson. “We learned a great deal from that clinical trial, where we believe we have a proof of concept.”

Investors involved are betting long-term that VelosBio will have a competitive pipeline to produce novel targeted therapies for use as monotherapy or in combination across a broad range of cancers.

“The early clinical data with VLS-101 are very promising and support ROR1’s potential as a novel oncology target. We see tremendous opportunity for the VelosBio pipeline to produce novel targeted therapies for use as monotherapy or in combination across a broad range of cancers,” said Karan Takhar, managing director, Matrix Capital Management. “We were attracted to VelosBio by the excellent science, experienced management team, and broad potential therapeutic applicability of its proprietary ROR1-targeting technology.”

If clinical trials are successful, Johnson said the company will apply to the Food and Drug Administration to test their antibody-toxin combo in breast cancer, ovarian cancer and non-small cell lung cancer.

VelosBio is also developing a bispecific antibody, a type of drug that is structured to hit two targets simultaneously. In addition, the company seeks to produce drugs using new kinds of linkers such as antibodies, payload and cytotoxins.

To date, VelosBio employs 30 local people and plans to double its headcount over the next year. Moving into its Sorrento Valley office this year, the firm also has a presence in Seattle and San Francisco.

The startup has raised more than $200 million, to date. Johnson said the new funding will be used to accelerate the growth of its programs and the company.

“We are going to be growing significantly in San Diego. I couldn’t be more proud and what this team has been able to accomplish in a short period of time,” said Johnson. “We have been very fortunate with little to no turnover over the last in two and a half years. It speaks volumes to what we are trying to build and San Diego is a great place to build it.”

Alongside VelosBio is Oncternal Therapeutics, another San Diego company focused on developing cancer drugs designed to target cells that express ROR1. Its lead drug candidate, cirmtuzumab, is in a Phase 1/2 study in combination with AbbVie drug ibrutinib (Imbruvica) as a potential treatment for patients with chronic lymphocytic leukemia and mantle cell lymphoma.