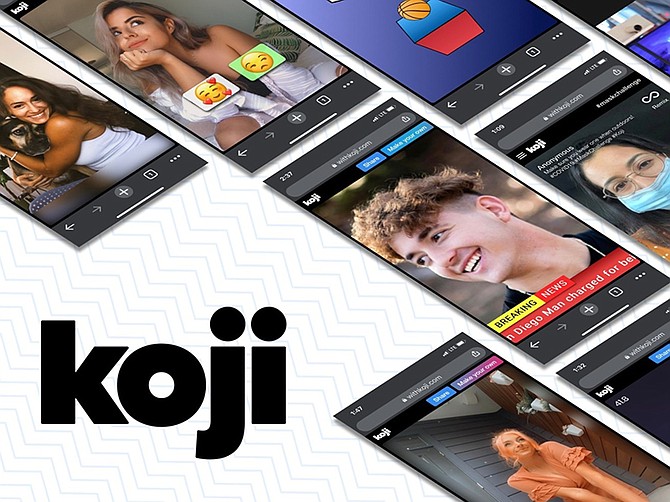 Photo courtesy of Koji. Koji has raised $10 million in a series A fundraising round for its online template platform.

San Diego-based startup Koji, which has developed a template-based platform where users can create games and other apps without having a software background, has raised $10 million in an initial round of venture capital funding.

Koji is a platform that allows users to customize memes, selfies, and web games, using GIFs and audio clips, based on the various templates created by independent developers.

For example, a developer can upload a basic single player shooter game that users remix by changing the background, characters, music, and more. Koji’s mission is to push the evolution of remix culture by democratizing interactivity.

“Starting from something that already exists and customizing it is actually a whole new type of creativity,” said Dmitry Shapiro, founder and CEO of Koji. “We believe the next phase is interactive.”

Shapiro, a former MySpace Music and Google veteran, and Sean Thielen, a genius developer, founded the company in 2016.

The fresh financing comes after spending a year in beta, the round led by Galaxy Interactive with participation from Bitkraft Esports Ventures and others. The startup has raised a total of $16 million from investors, to date.

During the beta period, the company estimated that people made more than 150,000 Kojis and played them 10 million times. Achieving early milestones, Shapiro is ready to take Koji to the masses.

“Our platform has been used by large brands, social media influencers and others to create games and interactive content that can be shared on social media and messaging apps,” said Shapiro. “We have hundreds of templates are currently featured, with new ones being added multiple times per day.”

Its platform allows users to simply pick a template, and click the “remix” button to customize with images, colors, sounds and other options, and then share to your feed on any social platform.

Take ByteDance’s parent company of TikTok, a social media platform that repurposes content, for example. According to Fast Company, it is now the most valuable startup in the world after downloaded more than 2 billion times and has a private valuation upwards to $110 billion.

“The market opportunity could reach the hundreds of billions,” said Shapiro. “Koji is today, what YouTube was in its early days. People questioned whether there was really a viable advertising market for user-generated videos.”

The team is hoping that not only will developers build on top of their templates, they’ll build a massive library of new ones. Ranging from free to paid versions that can be accessed virtually anywhere.

Beyond games, Koji also built image-editing tools and interactive selfies, where users can flip between two images with a tap. Every template is easy to change, giving users flexibility from images to game level to the source code itself.

If enough traction is gained, Koji has the potential to become a powerful marketing tool for brands and a sizable player in the casual gaming space, Shapiro said. Notable brands that have engaged with its platform include Google, Bazooka chewing gum, and even Singapore’s Ministry of Education.

More impressively, Koji users created games in response to a Burger King campaign back in February. As a result, Burger King shared the game and more than 30,000 plays occurred in less than 48 hours.

“Koji has the potential to catalyze the digital passion economy. By enabling brands, influencers, and creatives to easily remix interactive content and share in the value created, we believe Koji will become the meeting point for makers everywhere.” said Richard Kim, Partner at Galaxy Interactive.

Shapiro spent four years as an executive at Google. Prior to that, he worked at MySpace and founded San Diego-based Veoh Networks, an early rival to YouTube and Hulu. Veoh raised $70 million during its six years in operation, and later sold the company to Qlipsol for an undisclosed amount.