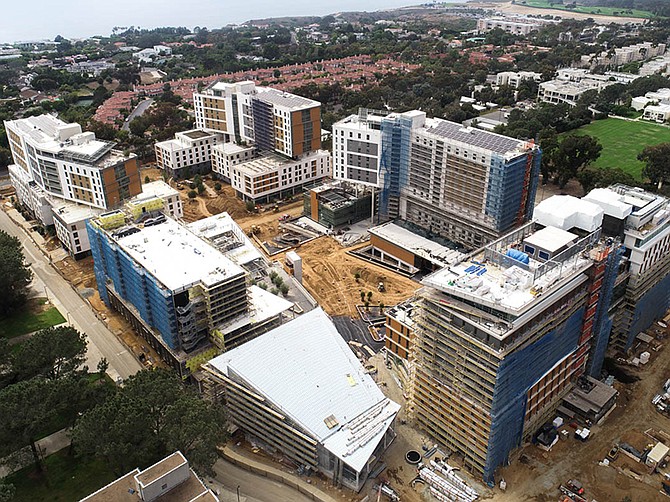 From bridges to single family homes that blend in with their surroundings to a mini-city of sorts in San Marcos, the husband and wife architectural team of Taal Safdie and Ricardo Rabines is involved in designing some of the most innovative projects in San Diego County.

Among the Safdie Rabines Architects’ latest projects is working in collaboration with the international architectural firm HKS in designing the University of California’s largest and most ambitious project – the North Torrey Pines Living & Learning Neighborhood.

Safdie Rabines also is the architect on Bayview, a ground-breaking 297,100 square-foot transit oriented development in Bay Park on a nearly 3.6 acre site that combines retail space and apartments in a terraced two-building project.

Taal Safdie and Ricardo Rabines – the firm’s founding partners - met as graduate students at the University of Pennsylvania.

Architecture was a natural for Safdie.

Her father, is Moshe Safdie, an internationally renowned architect and designer based in Boston.

“I grew up with an architect father and was immersed in architecture my whole life,” Safdie said.

At first, she decided to break away from her father’s profession and majored in economic theory at Vassar College.

“He was extremely successful at a young age. It was a lot of pressure to think about going into the same business,” Safdie said.

In the summer of her final year at college, Safdie took a design class, and she was hooked. Back to architecture she went.

After earning a master’s degree in architecture at the University of Pennsylvania in 1986, Safdie worked for Pei Cobb Freed & Partners and Kohn Pederson Fox Architects in New York before moving to San Diego with Rabines.

A native of Peru, Rabines said that as a child, he was always drawing and painting and taking notice of the buildings around him.

Architecture seemed like a natural career, and studying architecture at the University of Pennsylvania “was a dream,” Rabines said.

Coming from very different backgrounds, Rabines said he and Safdie shared a passion for design.

Rabines studied architecture at Universidad Ricardo Palma in Lima before going to the University of Pennsylvania. He worked for the firm of a mentor, Adele Naude Santos, in Philadelphia and Davis & Brody & Associates in New York.

In 1990, Rabines and Safdie followed Santos to San Diego when Santos became head of the architecture school at the University of California San Diego and moved her firm to San Diego.

“We got so excited. Here was a place in the world that was so beautiful,” Rabines said. “We really felt this was a place where we could make a difference, be part of it. We found that San Diego was a very inspiring place. It’s got beautiful canyons, beautiful hills.”

When the architecture school closed, Santos left for the San Francisco Bay area, and Safdie and Rabines stayed behind, forming their own firm in 1993.

“We decided just like that to open our own practice because we had just had a baby when we arrived here and I had no job,” Safdie said. “We started with small additions, resident projects.”

Their first was a small living room addition to a home in Del Mar.

Safdie said she likes to take on projects that are interesting and architecturally significant.”

“We’re very interested in creating places that enjoy the natural environment around us and enjoy indoor-outdoor living. That’s a driving force in our work,” Safdie said.

Echoing Safdie, Rabines said the firm tries to strike a balance between nature and the building they’re designing.

Safdie Rabines also is working with Levitt on Merge 56, a reimagined design for a Carmel Valley shopping center.

“I just find them to be extremely thoughtful in their approach where they take into account the cost constraints that we have at times while at the same time, trying to avoid making design compromises,” Levitt said. “I wouldn’t use them if I didn’t think they were great.”

Among Safdie’s favorite projects was designing the oceanfront Robert Paine Scripps Forum for Science, Society and the Environment at the Scripps Institution of Oceanography in La Jolla.

“We felt that it successfully responds to the site and allows people to enjoy the views of the ocean even though the building is there,” Safdie said. “One of our fears of putting a building there was that it would become something that blocked the ocean views.”

As described on the firm’s website, the center of the project is a 300-person auditorium, conceived of as a box within a box that can shed its layers depending on the event and the desired configuration.

Four oceanfront meeting rooms are complemented by a graduate student lounge, a catering kitchen, and a restaurant. Each of the meeting rooms open onto its own trellised terrace, enabling meetings and receptions to spill out onto the ocean bluff.

Safdie also is fond of what she called “the tree house,” a neighbor’s house in Mission Hills.

“We rebuilt a new house in the same footprint as the old house,” Safdie said.

“It’s like a tree house. There’s lots of decks and big doors,” Safdie said “It took advantage of the site.”

For their next challenge, Safdie and Rabines said they’d like to work on an airport, a hospital or something else dealing with health care.

“They’re very, very significant parts of our lives,” Safdie said. “There are a lot of improvements that could be made in the design of most health care facilities and most airports.”