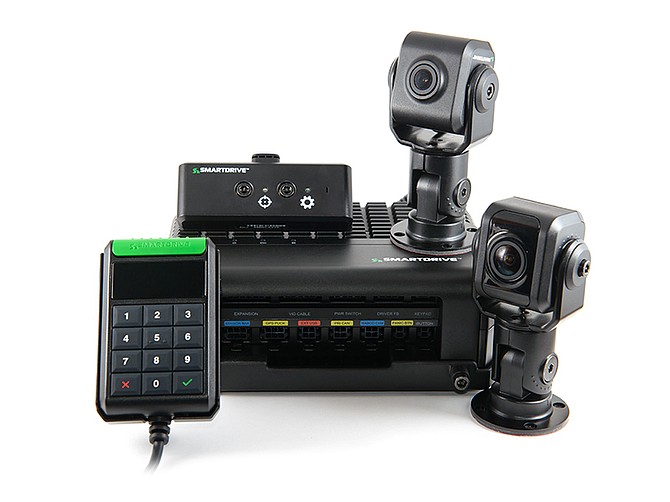 SmartDrive makes video telematics tools for vehicles that record whenever risky driving is detected. With 103 issued and pending patents, the company offers analytics on everything from driver safety to delivery times to fuel efficiency, through a subscription model for trucking fleets.

“Trucking is learning there is a rich amount of data of how the driver drives,” SmartDrive CEO Steve Mitgang said. “For 15 years, SmartDrive has been inventing ways to use video and analytics to assess risks. Just like when the Aztecs at San Diego State University watch film to perform at the top level.”

The deal with Swift – which is based out of Phoenix, Arizona — with a fleet of 19,300 tractors, 68,000 trailers and containers, and 25,000 employees – comes four years after SmartDrive secured installations on Knight Transportation’s fleet in 2016. Since then, Knight has merged with Swift to form a new parent company; Knight-Swift Transportation Holdings.

Swift Transportation CEO Dave Jackson said SmartDrive supports its commitment to safety. “SmartDrive allows our drivers and fleets to clearly see and measure safety performance, which allows the company to foster meaningful ownership of safety performance. SmartDrive excels in aligning drivers, operations and management around insightful and actionable metrics, allowing us to reinforce our safety culture of accountability throughout our entire organization.”

Mitgang said SmartDrive continues to see a 40% jump in revenue. Datamark Incorporated values the trucking analytics sector at $1.6 billion by 2022.

“Trucking is learning there is a rich amount of data of how the driver drives,” Mitgang said.

When Knight and Swift merged in 2017, Mitgang said Swift’s video telematics provider at the time wasn’t on par with SmartDrive. “Swift had an average safety performance, but when looking at five years of data at Knight, the results were dramatically different: SmartDrive was 25% more affective at preventing risky incidents on the road,” he said.

SmartDrive estimates its clients save $4,900 per vehicle per year, but more catastrophic incidents have the potential to cost hundreds of thousands to hundreds of millions. Within the first year of installation, clients report SmartDrive’s analytics system reduces unsafe driving by 83%; harsh braking by 56%; speeding by 83%; distractions by 57%; and fatigue by 92%.

Brett Sant, Knight-Swift’s SVP of Safety and Risk Management said, “Knight Transportation has experienced meaningful reductions in collision rates since installing SmartDrive in its fleet. That experience was instructive in the decision, ultimately, to roll out the SmartDrive program within our Swift fleets. We are grateful for the work SmartDrive has done and the positive impact the SmartDrive team has had on our fleet’s safety.”

Another carrier to choose SmartDrive, Groendyke Transport, is one of the oldest and largest tanker fleets in North America. Groendye is recognized as the fleet with the best overall safety record and program in the country, winning a National Tank Truck Carriers (NTTC) North American Safety Champion Award eight times.

“We couldn’t ask for a better partner or better results,” said Aaron Harmon, Groendyke’s senior vice president. “From the first time we met SmartDrive, it’s been a great experience in terms of product and support. When we tested other companies’ products, we knew they would be challenging for our managers to use. SmartDrive’s dashboards, coaching program and overall platform are easy to use. It’s clear to see the system was built as a tool to help really good drivers become even better and safer at their profession and not to simply reduce the number of events captured.”

Mitgang says even fleets with the best safety profile can improve performance.