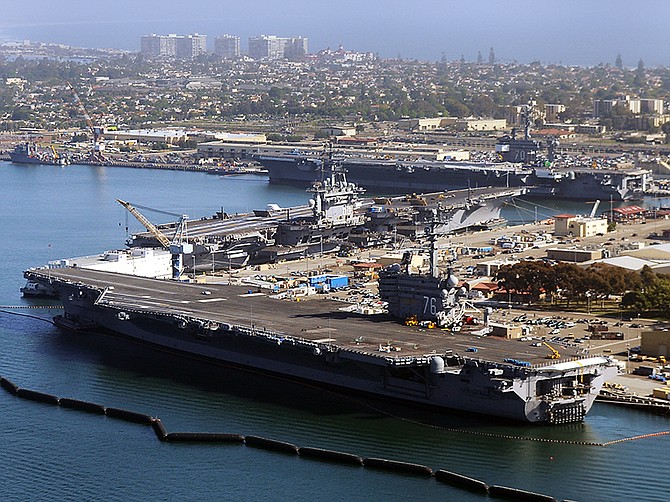 The U.S. Navy will spend up to $70 million over the next five years on temporary housing in the San Diego region for a subset of its civilian workers. It has chosen a Texas company to arrange accommodations for temporary shipyard workers.

The Team Housing Solutions website says it offers housing at hotels as well as in furnished apartments.

The Navy will now issue task orders for long-term lodging (that is, 31 days or longer) for temporary duty personnel of the Puget Sound Naval Shipyard and Intermediate Maintenance Facility, in San Diego to conduct ship repair and maintenance. The Puget Sound shipyard concentrates on nuclear powered vessels.

The contract attracted eight bidders and was announced on the beta.sam.gov website.

Also on June 1, the Navy issued its first task order under the contract, for $3.25 million.

The U.S. Navy awarded Epsilon Systems Solutions Inc. a $17.2 million contract to provide support services to the Southwest Regional Maintenance Center, which coordinates Navy ship repair. Work will be performed in San Diego and is expected to be complete by September 2021. The contract includes options which, if exercised, would bring the cumulative value of the deal to $106.2 million. Epsilon is a small business based in Kearny Mesa.

Work will be with the maintenance center’s production department, which is responsible for providing intermediate-level maintenance and repair support and selective maintenance training to more than 100 surface ships, submarines, shore activities and other commands of the U.S. Pacific Fleet.

Four companies bid on the contract, announced on the Federal Business Opportunities website. The Southwest Regional Maintenance Center awarded the deal on June 17.

This contract was competitively procured as a small business set-aside via the Navy Electronic Commerce Online website. The Navy received 15 proposals. The Naval Facilities Engineering Command Southwest in San Diego awarded the deal, announced on June 24.

The U.S. Navy awarded General Dynamics NASSCO an $11.2 million modification to a previously awarded contract to extend the delivery date of the USS Cowpens, a Ticonderoga-class cruiser, from December 28, 2019 to November 25, 2020, in order to complete ship repairs and alterations. The Southwest Regional Maintenance Center awarded the contract, announced on June 25.

T&M Painting & Construction Inc., a small business in Murrieta, received an indefinite delivery, indefinite quantity contract for exterior and interior painting at Naval Base Point Loma. The deal could be worth as much as $10 million over five years. Under an initial task order for $254,000, the business will paint the exterior of Building T302 and Building 145 at Naval Information Warfare Center (NIWC) Pacific. The work to be performed is for the preparation of paint surfaces and various buildings at Naval Base Point Loma. It includes incidental lead paint removal, scrapping and removing old paint on fascia boards, doors, windows and trim, eaves, downspouts and rain gutters and power washing of paint surfaces as needed. Work is expected to be complete by September. This contract was competitively procured via the Navy Electronic Commerce Online website, and three proposals were received. The Naval Facilities Engineering Command Southwest in San Diego awarded the deal, announced on June 19.