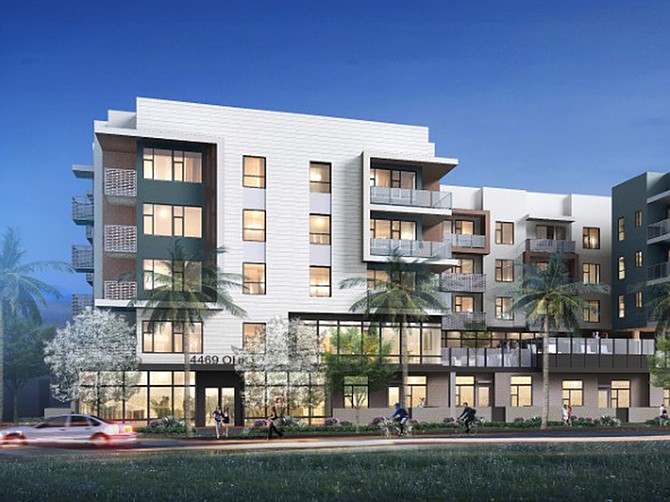 Rendering courtesy of Floit Properties. This North Park apartment complex being developed by Floit Properties is among the latest San Diego projects with Suffolk Construction as the general contractor.

“San Diego, in many respects, even though it’s not large, it plays on a large scale,” said Zach Hammond, general manager of Suffolk Construction in San Diego. The company is based in Boston.

San Diego is a particularly attractive market because “there is an enormous housing demand,” and the metro market region is home to growing life science and high tech companies along with the universities and colleges that provide the talent pool for those companies, Hammond said.

“The University of California system and San Diego State, you couldn’t ask for a better system,” Hammond said. “One of the unique things about San Diego is the preponderance of science and technology and the high quality health centers – Kaiser, Scripps, Sharp, one of the paramount health centers in the country.”

“It actually has more (market) sectors than some major metro areas in the country,” Hammond said. “As we look at some of the sectors, I think what we’re trying to do is figure out the combination of where the work is going to be in the next three or four years.”

Multifamily housing has been among the strongest sectors in the San Diego region, with multiple projects moving ahead even with the ongoing COVID-19 pandemic.

“The demand in San Diego has never been higher on housing, so we see that market not being affected,” Hammond said.

The apartment complex at 4469 Ohio St. is among Suffolk’s latest projects in San Diego, including Palisade at UTC apartment tower at the Westfield UTC mall completed in 2019.

In addition to the North Park apartments, ongoing projects with Suffolk as the general contractor include the $110 million Alila Marea Beach Resort in Encinitas, formerly known as the Encinitas Beach Resort, the 156-apartment Bayview Plaza by Protea Properties in Bay Park, and the 17-story Belmont Village Senior Living tower in UTC.

The North Park apartment complex is being developed by Dan Floit, founder and owner of Floit Properties, Inc. based in Bankers Hill with Suffolk Construction as the general contractor. Joseph Wong Design Associates is the architect.

Floit described the five-story project as “somewhat of a contemporary work with outdoor balconies.” Construction started in June.

“We should be open in 19 months, March 2022,” Floit said, adding that the COVID-19 pandemic did cause some initial concerns.

“We did delay construction for 75 days when COVID hit just to get our bearings,” Floit said. “We decided to take the risk and move forward. People need housing. Our job is to build it.”

Sooner Rather Than Later

Floit said the apartment market in San Diego is strong.

“I’ve been investing in apartments in San Diego since 1982. I’ve seen some pretty big recessions since then and I’m a believer in San Diego and San Diego will come back and I think it will come back stronger than ever,” Floit said. “I don’t think there’s any doubt, we need all the housing we can build and sooner rather than later.”

Although no one knows for sure how deep and how long the pandemic will affect the economy, Floit said it will have long way to go to rival the recession of the early 1990s.

“We’re all concerned about what’s happening. You’d be a fool not to be concerned,” said Floit. Still, he said that in the recession of the 1990s, “The apartment values in some cases came down 50%.”

That gives Floit some optimism for the North Park project

“We certainly hope and think we’ll be past COVID when we open,” Floit said.

Floit said he expects to attract young professionals as tenants, but “with the North Park demographics, we’ll get a little bit of everybody,” Floit said.

Every apartment will have an open floor plan, key fob entry and Wi-Fi, Floit said.