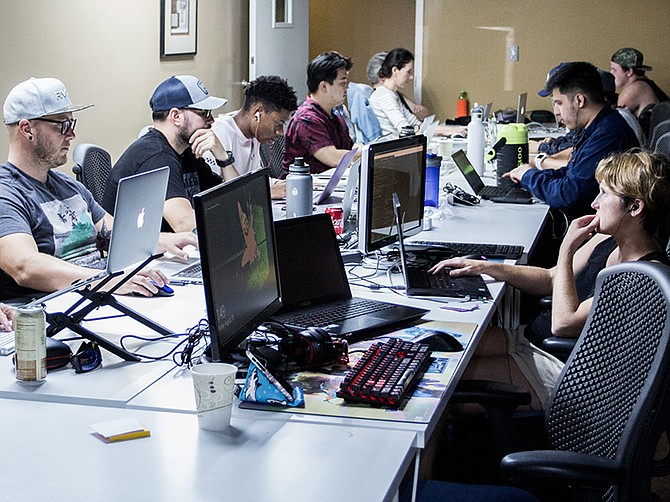 Formerly known as a local coding bootcamp, which trains people interested in a career in coding, the company pivoted to an “apprenticeship” model earlier this year.

Founder Michael Roberts said it was a huge switch, forced to pivot to survive during the pandemic, now the San Diego Code School is focused on business-to-business, helping identify talent for companies and serving as a key facilitator for junior and entry-level talent.

Launched in 2018, Roberts previously worked at Origin, a locally known coding camp where he built out the company’s curriculum as chief academic officer. Origin shutdown two years ago, leading him to create his own software school and today he has offices Escondido and Chula Vista.

In total, Roberts has helped launch more than 100 student careers and has graduates working at Apple, Walmart Labs, Sony, and Amazon Web Services.

This year, San Diego Code School became one of the first in California to be approved for its software development program by the California Division of Industrial Relations, Department of Apprenticeship Standards, and is now accepting students training and hands-on employment for its summer and fall cohorts.

“Our product is different from a code school product, which sells tuition and a program. We have a big list of people who want this program, so we don’t have to sell it to customers,” said Roberts. “We’re looking for people who have a passion for software development. They may not have the skills, but they definitely have the grit and the attitude.”

The company offers starting hourly wages for apprentices ranging from $18 from $20.

Apprenticeships receive 2,000 hours employment with San Diego Code School, 14 weeks of classroom training, 38 weeks of hands-on experience as a member of a development team, Salaried employment opportunities with its clients, and on-going training and mentoring.

Unlike coding bootcamps, which tend to be extremely expensive with many around $10,000 in tuition costs and require weeks or months off from work, the apprenticeship model is free of charge, said Roberts.

Most notably, the Code School announced it has stroked deals with three local companies, who will provide a minimum 12 months of experience to its students to develop their talent using their platforms. The partnerships include San Diego’s companies ServiceNow, Vista-based NewRocket, and CRM software provider Kizen.

Roberts said ServiceNow will be providing in-kind donation of training as well as helping train their first cohort of students to get them certified to use its platform.

Todd Bashor vice president of NewRocket Inc., one of the partners with San Diego Code School said from an employer perspective the apprenticeship model is a win-win for both parties.

“This apprenticeship path appeals to us as employers because it maximizes results for both parties. The apprentice knows that, what they are learning is directly relevant to a job in the market and the employer reduces risk while maximizing the value of the potential employee,” said Bashor.

Despite the pandemic disrupting most industries, a recent report from the San Diego Regional EDC, showed that software jobs have remained in demand. In February, the region saw consistent growth in industries such as the professional scientific and technical services since the Great Recession by roughly 5% per year.

Kate Gallagher, economic development manager at the San Diego Regional EDC, said software developers are the second most advertised job in San Diego with 3,000 jobs, only behind registered nurses which took number one.

She also added that she firmly believes the apprenticeship model is one of the best ways to give the next generation of software talent the opportunity to work on real projects and with real companies. “It allows them to further develop their skill sets and learn how to be an effective member of a team which will set them up from day one as being able to be very effective at their job,” said Gallagher.

To date, San Diego Code School’s apprentice program has been made up of double or triple the industry average for women, minority and veteran developers, the company said.

The company plans to serve up to 100 students by the end of next year, Roberts said, with San Diego continuing to be its primary hub. San Diego Code School generates revenue through its employer model and plans to be funded by federal and state sources in the near future.

During its time as a code bootcamp, the team helped graduate more than 30 coders with 92% obtaining employment within 6 months of completing the program. One of the school’s first graduates was hired by RedHat, a multi-billion dollar software company, within three weeks of graduating.