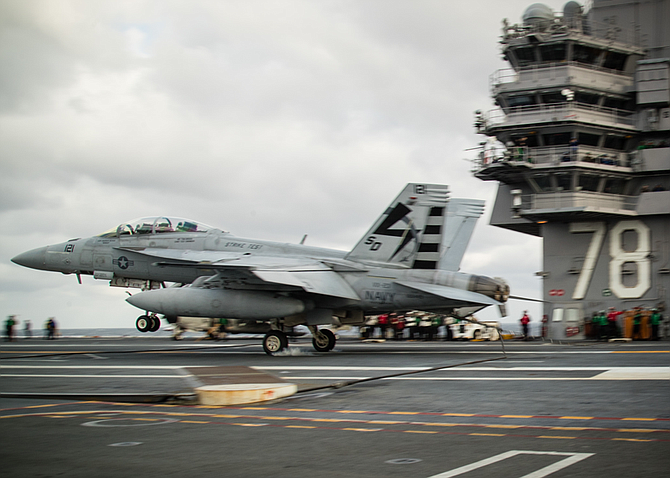 Photo courtesy of U.S. Navy. An aircraft’s tailhook snags a cable on the deck of the USS Gerald R. Ford on Jan. 17.

The aircraft carrier USS Gerald R. Ford — together with its groundbreaking subsystems — is slowly getting in shape for the ship’s initial deployment, which is still years away.

San Diego-based General Atomics is contributing a game-changing aircraft launch and recovery technology to the ship, though the equipment is not yet ready for combat use. One of the jobs ahead is fine tuning it to accommodate the variety of aircraft the ship will carry, from the heaviest to the lightest.

To that end, the carrier is holding aircraft compatibility testing this month.

New technology from GA and other contractors is meant to speed up the number of aircraft coming on and off the Ford — and subsequent carriers in the Ford class. Innovations on the ship support a 30% higher sortie rate than current, Nimitz-class carriers, using 20% fewer crew members, according to the Navy.

The counterpart to EMALS is the advanced arresting gear, or AAG.

General Atomics reported progress in testing its turbo-electric advanced arresting gear on Jan. 3. In a statement, GA said the system has logged more than 5,000 arrested landings at a land-based test site, and 747 arrested landings on the Ford while at sea. By now that number has grown.

The tailhook of a landing aircraft snags one of several cables on a carrier deck. The cables connect to the machinery of the advanced arresting gear (AAG), which absorbs the energy of the landing aircraft, slowing and stopping it on the flight deck.

An intensive two-day test cycle in October tested the machinery’s ability to work many times in a row.

“Over and over again, in rapid succession, AAG sustained an aircraft arrestment rate of nearly one per minute, successfully testing the system’s capability to handle the recovery sequence required for combat readiness,” said Scott Forney, president of GA’s Electromagnetic Systems business unit, in a statement distributed by the company.

“Arresting aircraft at a high rate over a sustained period on the same wire is an aggressive test and shows the ability of the system to withstand extreme conditions.”

Tests were conducted on a single advanced arresting gear system set up on dry land at Lakehurst, New Jersey — identical to three systems on the Ford. Five F/A-18 Super Hornet aircraft took part in the testing to simulate the operational tempo of carrier flight operations at sea.

“The Ford has the capability for an even higher operational tempo than demonstrated at the test site because it has three wires and clears aircraft from the flight path more efficiently,” Forney said.

The Ford received upgrades to certain AAG components called water twisters during the carrier’s time in the shipyard in 2019, the Navy said in a statement.

Now the carrier is in the Atlantic Ocean.

“Ford is now proving all of the test work accomplished at Joint Base McGuire-Dix-Lakehurst, New Jersey over the last year-and-a-half, that we can fly fleet aircraft as a ship with EMALS and AAG integrated,” said Cmdr. Mehdi “Metro” Akacem, Ford’s air boss, in a statement released by the Navy on Jan. 16.

“This is very exciting, and it is the culmination of a year-and-a-half of training, anticipation and teamwork.”

Deployment Eyed for 2022 or Later

The Ford’s first deployment is still years away. Various sources put it at 2022 at the earliest, though at least one critic in Congress says it may not be until 2024, according to a Congressional Research Service report updated in December.

Progress on a new style of weapons elevators, which will deliver bombs and missiles from the ship’s magazines to waiting aircraft, has been slow. The elevators use electromagnetic, linear synchronous motors rather than cable technology. A different contractor is responsible for the 11 weapons elevators. As of October, four elevators worked properly, according to the Congressional Research Service report.

Also delaying the $13.1 billion ship’s first deployment is a planned shock trial, an exercise where the Navy sets off explosives near the ship to test it in battle conditions. Shock trials are not always conducted on the first ship of a class, the CRS report said.

Meanwhile, the Pentagon continues to issue contracts to support the new-style equipment.

On Dec. 30, the Defense Department announced a $10.1 million award to General Atomics Electromagnetic Systems. The deal covers hardware for two Ford-class aircraft carriers under construction: the USS John F. Kennedy and the future USS Enterprise. Part of the $10.1 million sum will go toward support, part will go toward installation of production kits and part will go toward producing installation work instructions. A summary of the contract award was unclear on whether the contract supported the new-style catapult or the arresting gear, or both. Roughly half the work will be done in San Diego with 35% in Tupelo, Mississippi, where GA has its production plant. Work is expected to be complete in January 2024. The Naval Air Systems Command in Patuxent River, Maryland awarded the deal.

Separately, the Navy announced in December that it plans to negotiate a service contract with General Atomics. Specifically, GA will provide the services of senior engineers to support tests of the launch and recovery systems on the USS Gerald R. Ford, and to help troubleshoot issues as they arise. GA will also be asked to provide logistics specialists. A dollar amount was not specified. The presolicitation was published Dec. 10. The Navy said it did not plan to put the deal out for bid because General Atomics is the only company familiar with the equipment and the only company that can provide the services.