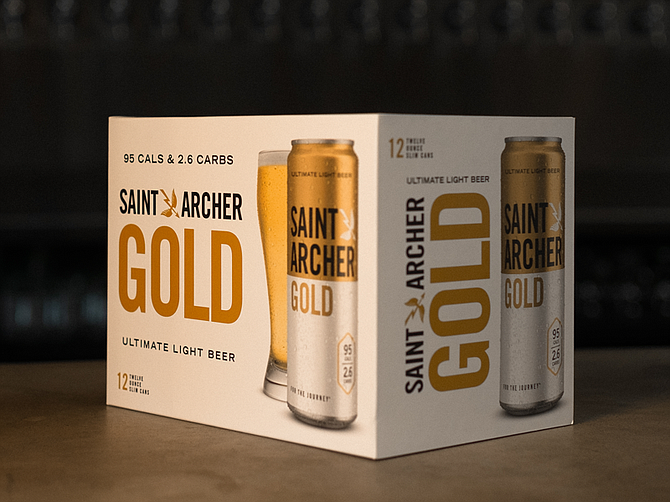 Saint Archer Brewing Co., the Miramar-based brewery founded in 2013 (sold to Big Beer in 2015) and with around 75 employees and two tasting rooms (in Miramar and Leucadia), is hoping to piggyback off recent growth with the release of its first offering through its strategic segmentation strategy, a premium light beer called the Saint Archer Gold. The launch will be supported by a $20 million marketing campaign that kicked off earlier this month.

“For 2020, the focus for us will be to successfully launch Saint Archer Gold nationally, while continuing to build on the momentum we have in the Pacific Region around our craft portfolio,” said Adam Warren, vice president of marketing at Saint Archer. “As part of this launch, we will be diving into a much larger marketing campaign, including a $20 million media spend to be applied to television, digital (and out-of-home advertising) which will bring a new level of brand awareness around Saint Archer that will be greater than anything we have ever done before.”

Warren said going from independent to being acquired by MillerCoors in 2015 has helped elevate the brand.

“MillerCoors has been a great partner to ultimately help magnify everything we are trying to do, while encouraging us to maintain our creative autonomy,” he said. “From product quality and innovation, to brand voice, they have invested time and resources to ensuring that we are able to see through our vision of being one of the most desired lifestyle brands coming out of California.”

Aside from the MillerCoors backing, Warren said Saint Archer’s growth is also a testament to the company’s continuous ability to maintain a sense of approachability. He said Saint Archer does so by telling its story through brand ambassadors, events or branded film projects. This has set Saint Archer apart from other craft breweries in San Diego, he said, and has helped the company grow awareness in and out of the county.

“Yes, we have award-winning beers, most recently a Silver Medal at the Great American Beer Festival for our Citra Crisp American Pilsner,” he said, “but, we still intentionally design our beers to be enjoyed by all, not just craft enthusiasts.”

Saint Archer was founded seven years ago by a group of like-minded individuals, including artists, musicians, professional surfers, skateboarders and snowboarders, that wanted to create a brand in craft beer, said Warren. It was originally funded by the founders, as well as their friends and some private investors, he said. Within its first year, Saint Archer began securing points of distribution throughout California, said Warren, and soon thereafter in Arizona, Las Vegas and the Pacific Northwest. In its first 36 months post-launching, Saint Archer saw a growth north of 65% year-over-year, he said.

All of Saint Archer’s craft portfolio is brewed, packaged, labeled and shipped from the Miramar headquarters, said Warren. Meanwhile, Saint Archer Gold is brewed in Miramar as well as in sister breweries in Texas and Georgia, he said.

While the highest concentration of its business remains in California, Saint Archer products, like its Mexican Lager, White Ale and IPA, are available across the Pacific region, said Warren, including Nevada, Arizona, Oregon, Washington, Idaho, Hawaii and Alaska, with Saint Archer Gold being sold nationwide.