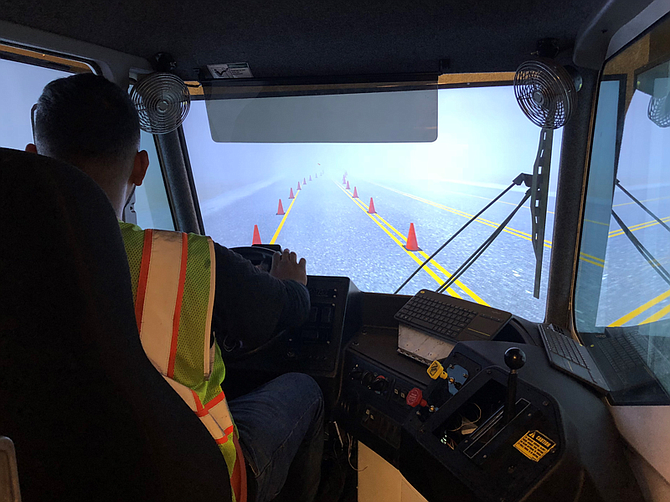 A driver encounters the hazards of winter driving while in the truck simulator. Photo courtesy of Advance Training Systems.

A Florida-based company has set up shop in North San Diego County to design and build virtual reality simulators that help train drivers for big-rig trucks, buses and military vehicles, as well as helping police and firefighters hone their driving skills.

The company, Advanced Training Systems, was founded in 2008 in St. Petersburg, Florida, said CEO John Kearney. The company also has a production facility in Oceanside, and its newest location, which opened earlier last year at an industrial park in Vista, will house research and development, customer training, sales and production functions, Kearney said.

The company chose Southern California for its research and production operations to be close to the region’s technology centers, as well as the skilled workers, from programmers to machinists, needed to design and build its simulators.

“This is a great place for us to be located,” said Kearney, during an interview at ATS’ 17,000-square-foot Vista facility. The company currently has about 20 employees at its Vista and Oceanside locations.

Before launching sales of its simulators in 2014, the company spent several years ramping up with research and development of its product line, and obtaining patents for proprietary technology, Kearney said.

ATS has seen its sales double in 2019 compared to the year before, and revenue is in the millions, Kearney said. The company’s growth has taken place against the backdrop of a U.S. truck driver shortage. According to the American Trucking Associations, or ATA, the U.S. trucking industry was short 60,800 drivers in 2018, an increase of nearly 20 percent from 2017.

Before founding ATS, Kearney served as CEO of Roadmaster, a school for truck drivers with locations across the country. As a young man, he also drove a truck that delivered rock from a mine in Florida to a processing plant.

The Price of Simulators

In designing its simulators, Kearney said, ATS sought to provide virtual reality technology at an affordable price. Its simulators sell for between $50,000 and $100,000, which can go up depending on the level of customization needed by the end user. In the past, said Kearney, one company that specialized in flight training simulators for pilots sold a truck driving simulator for $1.5 million. Other competitors in the space include L3 Technologies, Virage Simulation and FAAC Inc.

Today, ATS sells its simulators to driving schools as well as trucking companies that want to provide training for their drivers. The simulators can be adapted to a variety of uses; recently, the company was building a simulator for researchers to study the effects of distracted driving, and one that mimics a specialized vehicle used by shipping distribution centers to move truck trailers around their facilities.

When a user sits in the simulator’s chair, he or she can see a virtual reality view from the driver’s seat of a big-rig, including the rear-view mirrors, and also experience the feeling of a truck’s movement as it accelerates and brakes, and hear the sounds of the engine and the surrounding traffic.

The simulator teaches students the basics of operating a big-rig truck, such as shifting gears and backing up, and it also can help them adjust to various driving conditions including mountainous roads, icy conditions, rain and snow, and driving at night, said Elizabeth Myers, an instructor at the Shelly Truck Driving School in York, Pennsylvania.

The simulator can also test students’ judgment and reaction time by exposing them to potential hazards such as bicyclists, pedestrians and other vehicles pulling out in front of them, Myers said.

“It allows students to get an idea of what they will face on the road without the actual hazards and dangers of being out there,” Myers said.

Her school has an ATS simulator for its students’ use, and Myers said every truck driving school should have one.

“It’s like real life,” Myers said. “It’s incredible what this thing can do.”

Before becoming an instructor, Myers worked for more than a decade as a truck driver, piloting just about every kind of truck on the road, from big rigs to flatbeds to vans. The job provides a solid wage, averaging $75,000 per year for company drivers, and trucking companies are becoming more open to such perks such as allowing drivers to bring their children along, which makes the field more attractive to women, Myers said.

Beginning truck drivers must first pass a written exam to get a learner’s permit; they then practice behind the wheel of a truck to prepare for the driving portion of the exam. Those who pass both tests earn a Class A license, which allows them to drive tractor-trailers, also known as big-rig trucks, said Dave Dein, who oversees a truck driver training program at Patterson High School, about 90 miles south of Sacramento.

The school used state grant money to purchase two ATS simulators for students to practice on. Dein said the simulators help students become comfortable behind the wheel even before they climb into the driver’s seat on a big rig, creating “muscle memory” for such tasks as shifting gears and braking.

“I would never train without a simulator today,” said Dein, himself a former big-rig driver. “The training goes so much faster and transfers over to the real truck so much more smoothly.”

While Patterson High School has one of the first high school truck driver training programs in the nation, Dein said he has been contacted by numerous other schools to learn about the Patterson program, and several are launching their own programs.

Such training programs can help the trucking industry grapple with the shortage of truck drivers. According to a recent report by the ATA, the shortage is caused by a wave of drivers reaching retirement age, as well as a tight labor market and robust demand for freight services. Another factor, according to the ATA, is the relatively low percentage of women drivers (6.6 percent).

Kearney, of ATS, said the simulators offer great flexibility when training truck drivers and improve safety on the road.

“We have to train (drivers) with muscle memory and judgment to make the right decision,” Kearney said. “And we can do that.”

Designing and building simulators, said Kearney, “is a tremendous field and it’s growing.”