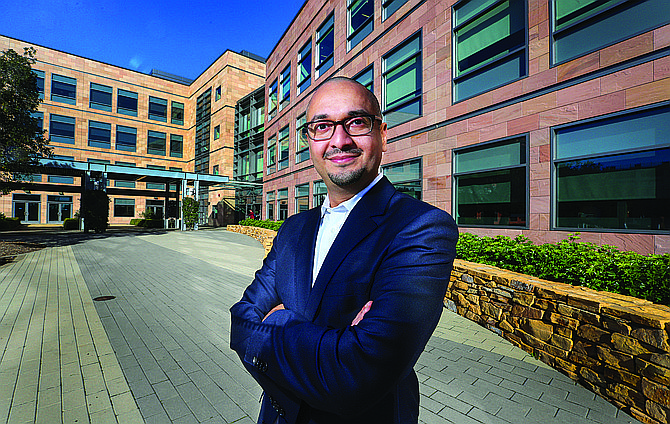 Those were a few of the San Diego highlights announced before and during the J.P. Morgan Healthcare Conference, biotech’s biggest annual meeting that kicked off Jan. 13 in San Francisco.

In unaudited financials Illumina recorded $3.5 billion in 2019 revenue, which Illumina CEO Francis deSouza said during the event is expected to rise 9% to 11% this year. Wall Street analysts expected a 12.6% increase in revenue during the period.

Souda said the company will likely exceed its conservative forecast, in part because of more government initiatives to study the genes of large populations. The goal: spur better diagnosis and treatment.

Illumina and Genomics England — which is affiliated with the U.K. government — during the conference announced a partnership to sequence up to 300,000 genomes over five years.

“In 2020, these projects should begin to scale and contribute more meaningfully to revenue growth,” Souda said.

This year has already been eventful for Illumina. Before the conference, the company said it would no longer buy Pacific Biosciences for $1.2 billion, following antitrust action from the U.S. Federal Trade Commission and the U.K.’s Competition and Markets Authority.

Beyond Illumina, smaller genomics outfits in San Diego plan to staff up after recent financings.

Element Biosciences on Jan. 9 announced an $80.3 million round as the company seeks to make genome sequencing more accessible.

“Element’s vision is to create disruption in each of the basic elements that comprise a sequencing platform, such as surface chemistry, sequencing chemistry, detection, and data analysis,” said Molly He, CEO and co-founder of Element.

That same day, Omniome closed a $60 million round. The company — among those in San Diego with an Illumina pedigree — will use the funds to finish prototype DNA technology instruments.

“Omniome has made incredible progress over the past couple years maturing from an early product concept company to a late-stage product development company," said Ken Song, Omniome's executive chairman. “The goal and vision have always been to develop a disruptive sequencing technology taking into account accuracy, speed, throughput and cost.”

“The sale of this division allows us to focus entirely on longevity and extending the healthy, high-performance human lifespan,” said David Karow, president and chief innovation officer of Human Longevity, in a statement.

Besides the $37 million in sale proceeds, the company in November raised $30 million.

Less than a week after the sale, privately-held Human Longevity announced it bought DoctorsForMe, a San Francisco firm that matches patients who have complex needs with doctors. Deal terms weren’t disclosed.

Human Longevity in early 2017 was valued at $1.6 billion, but nearly two years later received a $300 million valuation amid struggles to expand beyond its La Jolla testing site.

Daré received an upfront payment for an undisclosed amount, and if the U.S. Food and Drug Administration approves the product, Bayer could pay an additional $20 million for exclusive commercialization rights.

In addition, Daré would be eligible for up to $310 million in commercial milestone payments, plus royalties on sales.

The company later this year is planning a late-stage clinical study of ovaprene, a vaginal ring it developed to block out sperm. It doesn’t have hormones, unlike birth-control pills that can cause depression and other side effects.

In November, Daré acquired Microchips Biotech, a company that makes chips implanted under the skin to deliver medication over months or years. The acquisition complements Daré’s women health pipeline, the company said.

Previous J.P. Morgan Healthcare Conferences saw major acquisitions, including San Diego’s Impact Biomedicines being acquired for up to $7 billion in 2018. While a flurry of news accompanied this year’s conference, it was quieter on the merger front.