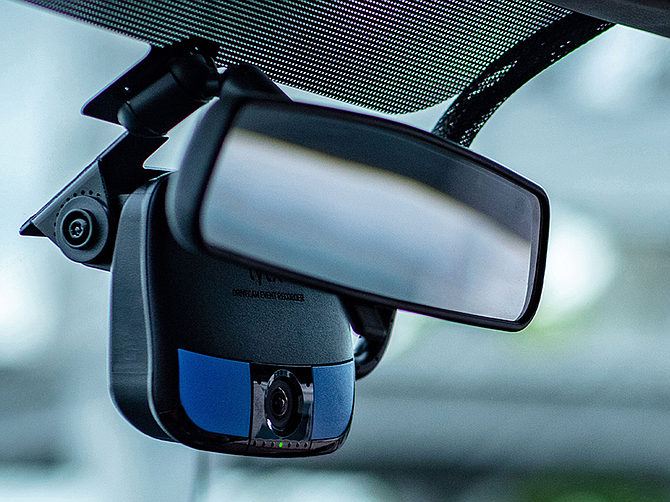 The Lytx camera, placed in the center of the windshield, monitors conditions on the road. Photo courtesy of Lytx Inc.

An investor group led by Permira, a global private equity firm, has offered in excess of $1 billion for a majority stake in Lytx Inc., one of several San Diego companies that offers video telematics to transportation companies and other fleet operators.

The deal values Lytx in excess of $2.5 billion and is expected to close in the first quarter.

If the deal closes as planned, it will be the largest investment in the video telematics space, ever.

Lytx announced Jan. 8 that a company backed by the Permira funds and co-investors entered into a definitive agreement to buy a majority stake in the company.

Brandon Nixon, chairman and CEO of Lytx, will retain his positions, the company said.

Permira “has a proven track record of helping companies build and grow their businesses over the long term,” Nixon said in a prepared statement. “With their expertise and the capital from this transaction, Lytx is poised to accelerate product innovation, make strategic acquisitions, expand globally and further lead the digital transformation of fleets worldwide.”

“This is a landmark transaction for the company, video telematics, the industry and San Diego,” said Adam McCarty, vice president of marketing and growth initiatives at Lytx. The video telematics space, he said, is going mainstream.

Telematics is computer technology that keeps an eye on vehicle use with the help of sensors and wireless connectivity. Telematics systems might employ artificial intelligence, machine vision and predictive analytics as well as GPS, G-force detectors and multiple cameras.

Telematics firms are not just selling their services. They also claim value in the amount of video and data collected on the highway system. Lytx says it has 120 billion miles of driving data.

Other assets include more than 130 issued or pending patents.

Lytx reported $300 million in revenue in 2019 and double digit growth. The business has been profitable for 20 quarters, McCarty said.

It has 650 employees with 450 of them in San Diego, and occupies 125,000 square feet in San Diego’s tech-heavy University Towne Center neighborhood.

Permira has offices in Silicon Valley and New York as well as several European and Asian financial centers. It currently has more than 30 investments and $36.6 billion of committed capital. Its most famous holding may be the British company that makes Dr. Martens boots, which it bought in 2014.

“We’re especially impressed by Lytx’s ability to aggressively set the pace for innovation, while maintaining positive EBITDA,” said Brian Ruder, partner and co-head of technology at Permira, in a statement issued by the companies. The acronym stands for earnings before interest, taxes, depreciation and amortization.

“We see numerous opportunities to leverage our cross-sector expertise in technology and industrials, as well as our global footprint, to accelerate Lytx’s already strong revenue growth domestically and internationally.”

Ruder said Lytx stands out among its competitors.

SmartDrive and Netradyne are two unrelated San Diego companies with similar technologies or business models. McCarty said there may be 100 companies in the telematics space, including several established in the last two years. “We’re seeing a ton of competition coming in,” he said, noting new companies in the Bay Area.

Telematics systems with cameras facing the exterior of a truck — in addition to the cab interior — can pinpoint dangerous driving habits, promote safety in other ways, offer better security on the road, limit insurance costs and save money for the companies that invest in such systems. Lytx claims thousands of its clients save hundreds of millions of dollars per year.

Citing data from Frost & Sullivan, Lytx said less than 1% of the 125.6 million commercial vehicles globally use telematics technology. The business paints a picture of a largely untapped global market. Nixon and McCarty said their company has “barely scratched the surface.”

The new capital will help the business optimize the markets it is in, and go into new countries, he said.

“Global opportunities open up for us,” McCarty said.