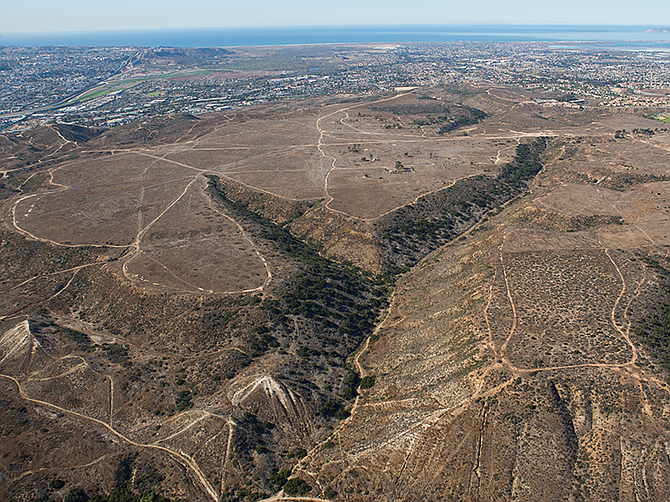 Otay Mesa has that rare commodity in San Diego, land. The development would include nearly 40 acres of parks, more than 20 acres of trails and 105 acres of surrounding open space. Photo courtesy of Pardee Homes.

Pardee Homes working with other property owners is preparing a plan for development of 472 acres of raw land in the Otay Mesa section of San Diego.

The plan tentatively calls for construction of a maximum of 5,277 homes — mostly townhomes and condominiums — starting with an 800-home project by Pardee, said Jimmy Ayala, San Diego division president of Pardee Homes.

Also included in the tentative plan is up to 174,240 square feet of commercial space in a mixed-use village core, a 10-acre school site, nearly 40 acres of parks, more than 20 acres of trails and 105 acres of surrounding open space.

Pardee Homes is taking the lead in preparing a master plan for the development of the 472 acres that have been designated Southwest Village.

Pardee is the largest property owner in Southwest Village with more than 200 acres, Ayala said.

The site is east of Interstate 805 and south of state Route 905 and San Ysidro High School.

The property was included in the Otay Mesa Community Plan update approved by San Diego City Council in 2014 but that plan “left this area as a white hole, so to speak,” Ayala said.

The master plan being developed by Pardee Homes in collaboration with the Otay Mesa Community Planning Group and other property owners would fill in the white hole.

Pardee Homes is in the process of preparing an environmental impact report (EIR) and specific plan for the project.

About 60 to 80 acres of vernal pool habitat would be preserved in keeping with the city’s comprehensive habitat preservation plan, Ayala said.

The plan also would preserve open space largely, at the southwestern portion of the site, with trails that would be integrated into the housing neighborhoods, Ayala said.

“In designing master planned communities, what we do is very deliberately incorporate the open space into the community and make connections with the community out into the open space with trails,” Ayala said. “The connectivity to open space is key (part) to a healthy, sustainable life style, not only for the land planning of it, but for the residents themselves.”

The specific plan will outline details of what could be built on the 472 acres and where it would go and could go to City Council for approval as soon as late 2020 or early 2021, Ayala said.

Construction of the first homes could begin in 2023.

In this case, he said the goal is to provide workforce housing priced from the high 300,000s to the mid 400,000s, similar to the homes in Pardee’s nearby Ocean View Hills development.

“It’s that medium income, working-class housing that the residents of Ocean View Hills have now and we really feel will be the future residents of Otay Mesa,” Ayala said. “There’s a lot of talk in San Diego about housing and affordability. It’s just getting to the point that jurisdictions and policymakers are recognizing that we have an issue here.”

Otay Mesa is drawing increasing interest from builders because it is one of the few places left in San Diego where there is vacant land to be developed.

“We’ve been in Otay Mesa for a couple of decades now and it’s been pretty successful,” Ayala said.

So far, he said Pardee Homes has built about 3,600 single family homes in Otay Mesa and about 1,200 multifamily homes.

Ongoing projects include the townhome community of Playa Del Sol, which Ayala said it is about one-third finished.

“The employment and the jobs in Otay Mesa are also growing,” Ayala said.

Among the commercial developments, a four-story, 2.6 million square-foot distribution center is being built for Amazon on a 65-acre site at Otay Mesa Road and Enrico Fermi Drive.

Majestic Realty Co., headquartered in Los Angeles has partnered with Sunroad Enterprises of San Diego for development of a three-building industrial park in Otay Mesa with a total of 227,000 square feet and Murphy Development Co. a year ago completed construction of the final building in the Siempre Viva Business Park in Otay Mesa. The park includes 2.1 million square feet of industrial space on 155 acres near the Otay Mesa Port of Entry.

“Otay Mesa is the industrial capital of the City of San Diego now because that is where you can build warehouses of significant size.” 