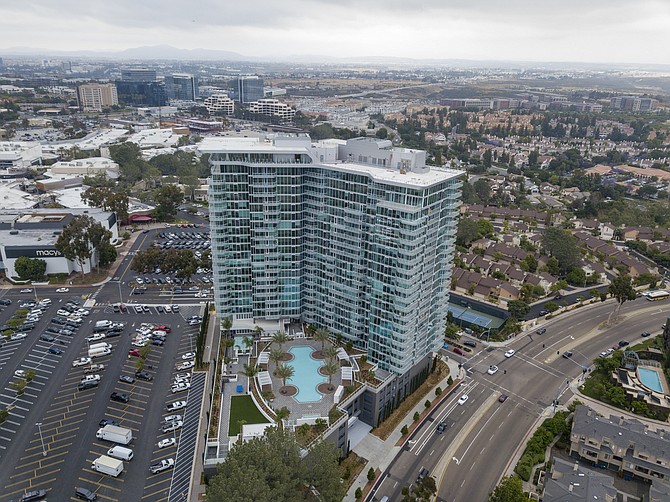 Palisade apartments in UTC is among the high-end apartment complexes that accounted for a growing share of the rental market over the past decade. Photo Courtesy of Westfield UTC.

As the second decade of the 21st century comes to an end, the profile of the San Diego County housing market has shifted significantly over the past decade, according to a report from a national real estate listing company.

More people are renting than ever before, according to a report from RENTCafe.

On the other end of the demographics, more and more people in their 20s and 30s — the so-called millennial generation — are renting, either by choice or necessity.

And high-end, pricier apartments represent an ever- growing share of the market, accounting for 40 percent of the 2.4 million apartments built nationally since 2018.

“This is the first time we see such a substantial demand for and supply of high-end apartments,” RentCafe reported.

In San Diego County, nearly 34% of the multifamily housing inventory is on the high end with nearly 30 percent considered workforce housing, according to Doug Ressler, an economist with RentCafe.

With housing prices reaching or topping what they were before the Great Recession and student debt at all-time highs, many in that millennial age group simply can’t afford to buy and others earning good salaries don’t want to be tied down and change jobs frequently, Ressler said.

Renters also are expecting more from their residences.

At the same time, the number of renters over 60 years old rose by 45 percent in San Diego County over the past decade, one of the largest increases in the nation, according to RentCafe.

Nationally the number of renters over the age of 60 rose by 32 percent over the past decade.

Overall, the number of people renting apartments grew twice as fast as the number of homeowners, according to RentCafe, and more people with annual incomes of $100,000 or more are choosing to rent than ever before.

Among the 50 largest metro areas in the country, the average monthly rent grew faster in San Diego than in all but two other areas — Los Angeles and Phoenix — reaching $2,225 in 2019, a 54 percent increase, according to RentCafe.

A problem is that while more people want to rent or have to rent, new apartment construction hasn’t kept pace with the demand for housing, which is pushing up rental rates and housing prices, said Christopher Salviati, an economist with Apartment List, an apartment listing service.

As more people choose to rent, fewer are having children, dropping by 1.3 million since 2010, Rent Café reported.

An interesting side note cited by RentCafe is that El Cajon was 11th in the nation when it comes to renter’s share of the housing market — 63 percent.

El Cajon also was recently pegged by another apartment listing service — Zumper — as having the lowest monthly rents in San Diego County, averaging $1,300 for a one-bedroom apartment in November and $1,590 for a two-bedroom apartment.

Nationally, the average size of an apartment has decreased by 57 square feet since 2010, or about the size of a typical bathroom, according to RentCafe, but grew slightly in San Diego County to 848 square feet from 839 square feet in 2018.

For those who want to buy rather than rent, the number of existing homes on the market took a dive in San Diego County in 2019, mirroring a national trend, according to the real estate company RE/MAX.

As of November, the company in its National Housing Report said there was a two-month supply of for-sale homes in the county, down 9.1 percent from October and down a whopping 45.9 percent from November 2018.

“I’m seeing less inventory. I’m seeing that we had a little lull in buyers but it’s really picked up, especially over the holidays,” said Jan Ryan of RE/MAX Direct Ramona.

“I’ve got everything pretty much sold,” Ryan said. “We’ve had a number of caravans canceled because of the lack of new homes.”

“This is the longest period I’ve seen of a steady real estate market,” Ryan said. “It makes me a little nervous because it’s been so good.”