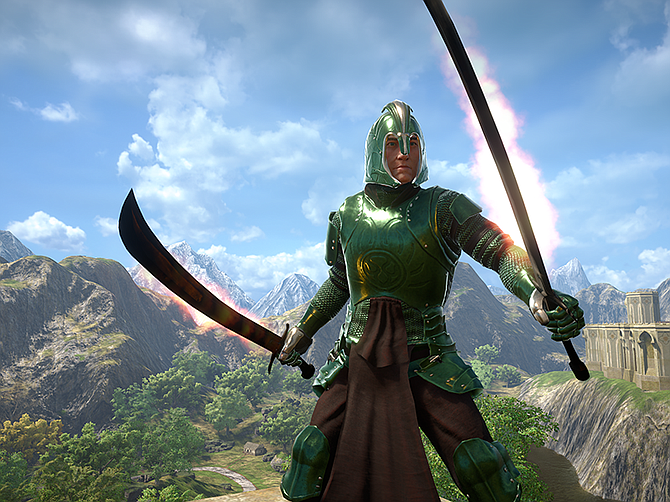 Visionary Realms, a gaming startup headquartered in Carlsbad, is working on its much anticipated game called “Pantheon: Rise of the Fallen.”

Chairman and CEO Chris Rowan’s, a former venture capitalist, foray into the gaming space started at Sony, there he pioneered new businesses within the Sony’s Entertainment division. Rowan’s co-founder, chief creative officer and gaming legend Brad McQuaid passed away in November of 2019.

In a survey conducted by a popular gaming website, Massivelyop.com, “Pantheon” was voted “Most Anticipated MMO of 2019” by a huge margin.

“We’ve made an impression on the gaming community. People are really looking forward to this game being released,” Rowan said, “So far, we’ve been recognized by two online gaming publications, winning most anticipated massively multiplayer online (MMO) four times in a row.”

The team at Visionary Realms is undertaking a huge project in developing “Pantheon,” a fantasy-themed game with realistic and high-performance graphics. Visionary Realms aims to be a force in the game industry through its engaging, complex and challenging social games. The team, having worked on the game for past several years has built up a cult-like fan following, according to the company

Free-to-play business models have become the popular industry standard among studios, for example, a user can play the game for free with the option to make in-game purchases.

Visionary Realms plans to launch the game on a monthly subscription model. In addition, as the world expands, players will be able to purchase additional modules but the project will primarily be driven by subscription, the company said.

The marketing strategy for gaming studio has changed.

“We have Netflix, Amazon Prime, Hulu, and Disney Plus battling over movie streaming. But we also have game streaming competition among these services,” Rowan said, “It’s such an important part of marketing games now.”

Today, games are advertised by game ‘influencers’ on growing streaming platforms such as Twitch (Amazon-owned) and Mixer (Microsoft-owned).

For example, game influencer, called Ninja, the world’s most popular game influencer racked up an estimated 226 million streaming views on Twitch in 2018, according to TEO Analytics and esportsobserver.

To date, Visionary Realms has closed Series A funding, the amount has not been disclosed. The company said it is considering other possible investments or production partners. Rowan didn’t disclose their budget, he said a project similar to this can cost between $10 to 50 million.

The startup said it’s in talks with several big partners to help them finish the game. The release date has yet not been announced.

Rowan said the city’s gaming talent pool has been a critical piece of the region’s growing economy.

“From Irvine all the way down to San Diego, the gaming industry doesn’t get much attention.” Rowan said, “But, there’s a lot of talent here, it leads to a lot of employment, and I think it’s a critical piece of the San Diego economy.” Rowan said.