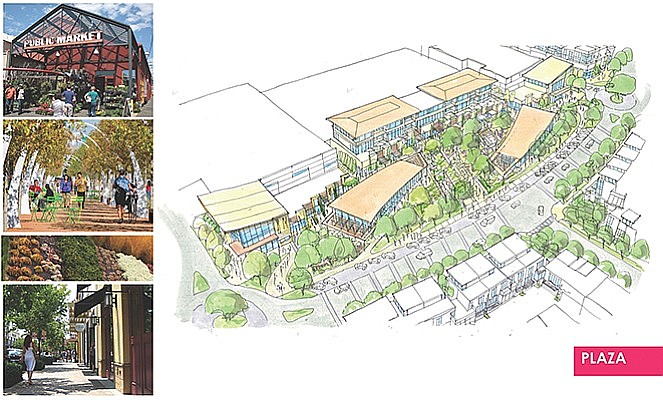 A mixed-use project in Rancho Penasquitos/Torrey Highlands that its designers said would redefine suburbia is itself undergoing a little redefining.

Sea Breeze Properties has started grading the 42 acre si te of its Merge 56 project but developer Gary Levitt said the project is being tweaked to reflect changes in the retail and entertainment environment since he bought the property on Camino Del Sur and state Route 56 in 2013.

“The focus up to now has been on getting grading permits,” Levitt said. “Only now are we able to step back and look at the market and develop plans on the commercial portion.”

Any changes “will be consistent with the original plan,” Levitt said, adding that the overall look and feel of Merge 56 with its meandering walkways and gathering places that make it a walkable community in the midst of suburbia won’t change, Levitt said.

“It’s a true mixed-use, both horizontal and vertical,” Levitt said. “It creates an urban core within a suburban neighborhood.”

What is likely to change is the mix of what goes into the project.

“The amount of retail as a proportion of the site is going down as the realities of the retail market become evident,” Levitt said.

As originally planned, Merge 56 would have had nearly half the site filled with retail — more than 500,000 square feet.

“We’ll be down a lot from that,” Levitt said, adding that details were still being worked out.

The original plan also called for a movie theater and a food market. That’s in flux.

The center may still have a theater, but it might be smaller than originally thought. The same is true for the market.

“There’s no certainty with respect to the size of the movie theater,” Levitt said.

The same is true for the market, with online shopping catching on for food shopping as it has for other retail segments.

“It’s just a time to sit back and reevaluate,” Levitt said.

With the advent of online shopping, big-box stores have gone out of fashion but former big-box stores are in big demand in San Diego County, often to be carved up into smaller shops as is happening in the former Sears Store in El Cajon’s Parkway Plaza or razed to make room for projects that have a collection of shops and restaurants as is happening in a former Sears store in UTC.

“Demand for (retail) space in San Diego will continue to be strong,” Cushman & Wakefield said. “With anticipated deliveries of high quality, experiential retail in mixed use developments over the next two years. San Diego’s large millennial population, known for valuing experiences, will be a heavy driver, demanding innovative and Class A retailers.”

Besides the commercial portions of the center, plans for Merge 56 called for 242 residences that would be a mix of detached homes, condominiums and apartments.

Levitt said he is negotiating with a housing developer to take over the residential portion of Merge 56.

“We don’t know how to build homes,” Levitt said.

Actual construction of the commercial and residential portions of Merge 56 is likely to start in 2021, Levitt said.

Designed by Safdie Rabines Architects, Merge 56 is a dramatic departure from the big-box shopping center planned in the 1990s as part of the Rhodes Crossing development approved by the San Diego City Council in 2004.

The council gave unanimous approval to Merge 56 in 2018.