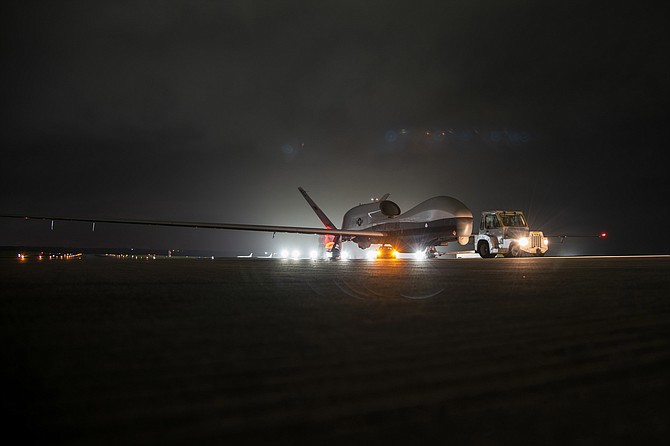 A U.S. Navy Triton aircraft idles on the runway in Guam in an undated photo.

The U.S. Navy invested hundreds of millions of dollars in its unmanned Triton aircraft program in early February, placing an order with builder Northrop Grumman Corp.

The Pentagon announced the deal on Feb. 6.

The Triton is a version of Northrop Grumman’s Global Hawk aircraft, with a sensor package suited for missions over the water. The builder says it’s suitable for intelligence, surveillance and reconnaissance (or ISR); as well as signals intelligence; search and rescue and communications relay work. The aircraft can fly at altitudes greater than 10 miles, has a range of 8,200 nautical miles and can conduct missions for longer than 24 hours.

The Navy’s ultimate plan, or program of record, calls for buying 68 Tritons, though that number is subject to the federal budget process.

Northrop Grumman runs its Triton program out of its Rancho Bernardo offices, though it does not build the aircraft there. Roughly one-third of the work on the latest deal will be performed in San Diego, the Pentagon announcement said. A minor amount of work, roughly 1%, will be completed in San Clemente.

The Navy announced its February order a little more than a week after it announced that it sent two Tritons to Guam for their initial deployment in the Pacific theater.

Northrop Grumman officials worked with members of a new unmanned aircraft squadron to train and prepare for the two aircrafts’ arrival at Andersen Air Force Base in Guam.

The Navy said the Triton has entered its pre-combat, “early operational capability” phase, and that its arrival will help the service “further develop the concept of operations and fleet learning associated with operating a high-altitude, long-endurance system in the maritime domain.”

“The introduction of MQ-4C Triton to the 7th Fleet area of operations expands the reach of the U.S. Navy’s maritime patrol and reconnaissance force in the Western Pacific,” said Capt. Matt Rutherford in a statement distributed by the Navy. Rutherford is commander of Task Force 72, which oversees all patrol, reconnaissance and surveillance forces in the 7th Fleet area of operations. The Navy defines its 7th Fleet area as a broad swath of the Pacific and Indian oceans, stretching from the International Date Line to the border of India and Pakistan, and from Russia’s Kuril Islands to Antarctica. The area includes Russia, China and North Korea.

“Coupling the capabilities of the MQ-4C with the proven performance of P-8, P-3 and EP-3 will enable improved maritime domain awareness in support of regional and national security objectives,” Rutherford said. The P-8, P-3 and EP-3 are manned aircraft. The P-8 is a recent addition, a military version of the Boeing 737. It can conduct surveillance, and unlike the Triton, can launch torpedoes and cruise missiles.

Initial operational capability — the state when the Triton can be deployed in battle — is still in the future. That step will include four air vehicles with the capacity to support 24/7 operations, the Navy said.

Aerospace is just one of Northrop Grumman’s businesses. The corporation’s Aerospace Systems segment reported sales of $13.9 billion in 2019, up 6 percent from 2018. Aerospace Systems has operated at a 10.3% margin, the business said when it reported 2019 earnings on Jan. 30.

In addition to Triton and Global Hawk, the Aerospace Systems business is designing the next-generation U.S. Air Force bomber, which is expected to have an unmanned capability.

Northrop Grumman’ Triton program also suffered a setback recently. According to a late January report in Defense News, the German government decided against a $2.5 billion contract to buy Triton drones in favor of manned aircraft from Bombardier.