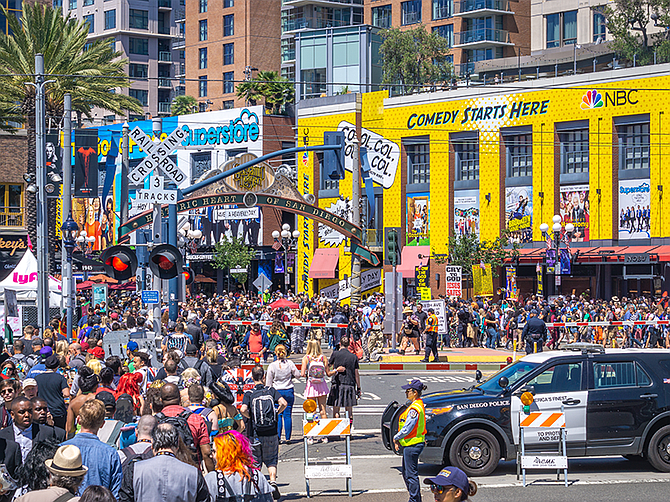 The San Diego Convention Center is ground zero for the annual invasion of comic book, movie, and science fiction fans known as Comic-Con International, but diverse businesses throughout the county receive an economic boost from the massive event.

“Those people have a huge impact on everything from restaurants to transportation to attractions. You could say from the corner grocery store to SeaWorld and the (San Diego) Zoo.”

Attendees often to explore the region, spending their money throughout the San Diego area, said Jaymie Bradford, executive vice president and chief operating officer of the San Diego Regional Chamber of Commerce. “It provides the opportunity to showcase our different neighborhoods that typical conventioneers wouldn’t go to.”

The economic benefits extend well beyond the San Diego city limits, said Elvin Lai, president of the San Diego County Lodging Association. It’s not unusual to see fans dressed as super heroes commuting to the convention center from hotels as far away as Oceanside and Chula Vista. Some innkeepers arrange convention transportation for their guests.

While hotels are a big beneficiary, 70 percent of the money Comic-Con visitors spend is for purposes other than lodging, noted Terzi. According to San Diego Convention Center Corp., well over 135,000 people were in town in July for Comic-Con 2019. Attendees were responsible for direct spending of $91 million. They had a regional economic impact of $155 million. That included $31 million spent for lodging; $13.2 for meals and beverages; $6 million on retail shopping; $3.4 million on attractions; and nearly $4 million on local transportation.

Among annual events in San Diego, Comic-Con “is huge” said hotelier Robert Rauch, president and CEO of RAR Hospitality, which operates nine hotels within the county. “It’s a powerful event that comes at a time of high demand to begin with. You see the same thing when the Super Bowl comes to town, but the advantage of Comic-Con is that it happens every year.”

A Fortune in Free Publicity

News coverage of Comic-Con gives the San Diego region worldwide publicity and promotes it as a tourist destination. Comic-Con has been based at the convention center, since 1990, said Clifford “Rip” Rippetoe, president and CEO of the San Diego Convention Center Corp.

“When Comic-Con is here, all eyes are on San Diego,” he said.

The event generates more news coverage than major sports events, said Terzi. “We get placement all over the world. It’s a huge benefit to us as a tourism community. We couldn’t pay for all of that.”

Because of its popularity, the event has maxed out space in the San Diego Convention Center, which is contracted to host the event through 2024. The agreement, which includes a discount for renting the center, was reached despite concerns that the event has become too large for the venue.

“We’ve had to cap our attendance,” said David Glanzer, Comic-Con International’s chief communications and strategy officer. “We have a lot more people who would like to attend.”

Unable to get tickets, many people simply gather in the Gaslamp Quarter to people watch and take part in related festivities. During San Diego Comic-Con, many related events are held offsite in city park space or in hotel ballrooms. Some movie studios rent out vacant commercial space to create elaborate interactive displays for fans called activations, noted Michael Trimble, executive director of the Gaslamp Quarter Association.

“It’s a great financial and economic boost for the Gaslamp Quarter and its merchants as well as all of downtown,” he said. “We have multiple studios doing things in hotels, restaurants, and retail spaces.”

A half-century old, Comic-Con has come a long way from its first incarnation as a small gathering in the basement of downtown’s US Grant hotel in 1970. At the time, it was called the San Diego Golden State Comics Convention. Despite the presence of renowned science fiction writer Ray Bradbury, it was a comparative low-key affair, drawing a little more than 200 attendees.

Today many companies take part in the event as a means of promoting products. Motion picture studios use the event to gain insight into the type of films the public wants to see. They “pick the brains of the people who are buying tickets,” explained Glanzer.

Some businesses take part in Comic-Con to introduce their wares to an international audience, said Miro Copic, a marketing lecturer at San Diego State University. Among them are local mobile game developers.

“This is a true worldwide media event,” Copic said. “You have attendees from over 80 countries. You have international media.”

Changing With The Times

Most Comic-Con attendees fall between the ages of 17 and 34, and there is almost an even division of males and females, noted Glanzer, who began attending comic conventions in San Diego as a fan in 1978.

“It’s a wide spectrum,” he said. “Comic-Com started as comic books, film, and science fiction. Now you will see a lot of costume building and designing, multimedia, and virtual reality. It’s an event that changes with the times. If there is a secret to our success, it’s that we are a bunch of fans. We try to put together the type of convention events we would like to go to.”

Among the economic beneficiaries of Comic-Con event are businesses near the waterfront that lease land from the Port of San Diego. In addition to bringing in tourists to patronize bayside restaurants, harbor cruise companies, and sports fishing businesses, Comic-Con is a magnet for local residents who normally would not visit the waterfront, said Sharon Bernie-Cloward, president of the San Diego Port Tenants Association.

“It reminds people of what is on the bay,” Cloward said. “Comic-Con hits a big sector of our tenant business.”

Waterfront businesses within all five of the port’s member cities — Chula Vista, Coronado, Imperial Beach, National City and San Diego — benefit, she said. “People will stay at a hotel or an Airbnb, but they will look for activities to do. It goes far beyond a typical convention.”

Ken Franke, president of the Sportfishing Association of California trade group, agrees. “When Comic-Con shows up, everything gets busy on the whole waterfront area.”

Keeping the Faith With Fans

Despite all the growth, glitz, and glamour, Comic-Con, hasn’t lost touch with the comic book and science fiction enthusiasts who gave it its start, Glanzer said. The focus remains on creating a memorable experience for pop culture fans.

“Comic-Con really is a community,” he said. “We seem to have been embraced by the city. For that we are grateful.”