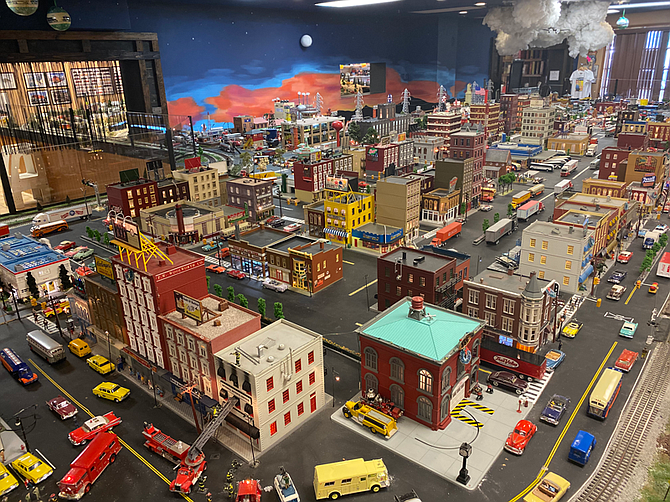 David Lizerbram and Mana Monzavi couldn’t stand to see the trains leave Old Town. The model trains, that is.

A few months ago, the husband and wife and their 2-year-old son discovered — and fell under the spell of — an elaborate O-gauge layout with its distinct railroad noises and its memorable nighttime cityscape.

That was the start of it. Then Lizerbram and Monzavi heard that the Old Town Model Railroad Depot and its highly detailed, 2,500-square-foot exhibit was poised to leave its retail space on San Diego Avenue. They stepped in, picked up the lease and took on a major new project.

“We weren’t looking to buy a business,” said Lizerbram, a North Park attorney.

But they did. Hearing the exhibit was on borrowed time made the difference.

“We’d be heartbroken to see this go away,” he said.

The exhibit, which does not charge admission but takes donations, costs more than $10,000 per month to operate, according to a sign on the wall.

Lizerbram declined to say how much he invested. He said he reviewed the numbers, liked the revenue and the amount of foot traffic the venue generated, and decided to give the business a shot.

Some 4 million visitors a year reportedly go through Old Town San Diego State Historic Park, which is a short walk to the northwest. The historic Whaley House is a few hundred feet away. It claims more than 125,000 visitors annually. It also reputedly has ghosts, but that’s another story.

Fred Grand, president of the Old Town Chamber of Commerce, said there is an entire grouping of small museums at the southeast end of Old Town that brings visitors to his members’ doors. The attractions include the African Museum/Casa del Rey Moro and the William B. Kolender Sheriff’s Museum.

Lizerbram and Monzavi said they plan to adjust Model Railroad Depot’s retail component. Such a business might serve at least three groups: serious hobbyists, vacationers and families with children. Monzavi said it may not have had enough merchandise for the latter. Lizerbram wondered aloud what tourists can easily take on board an aircraft, and whether a merchandise-shipping option might get more people to spend.

One large steam locomotive for sale at the exhibit had a $750 price tag. Serious hobbyists aren’t averse to spending such sums. Of course, Monzavi said, there is the issue of what sort of margins a distributor may offer.

Old Town enjoys traffic from both out-of-town visitors and locals, Grand noted. Monzavi, who owns a marketing business, said she was previously unaware of the venue and wants to put the museum on the radar of local families.

She and her husband are also looking at the potential of hosting events at the depot.

Model trains come in several sizes. The Old Town exhibit has O-gauge trains that operate on classic three-rail tracks, with the third rail down the center.

Model train enthusiast Gary Hickok founded the Old Town Model Railroad Depot in 2014, and is still active under the new owners. Lead electrician Jim Burke of La Jolla, who was present on a recent Monday, said the exhibit has 12,000 feet of wire underneath.

Classic railroad advertising and memorabilia line the walls of the retail space. One framed menu refers to a $7.90 steak and champagne dinner offered by the Santa Fe Railway on its most famous train, the Super Chief. The museum walls also include photos of the downtown San Diego depot under construction in 1915.

The model diorama is loosely set in 1959, and there is more than a little romanticism in its look back at the past. Big steam locomotives still rule the model landscape. On a recent weekday, an O-gauge Union Pacific Big Boy locomotive hauled a string of orange refrigerator cars. A peek inside the locomotive cab showed a red glow in its firebox.

The layout includes a drive-in movie theater, with a monster movie playing on a video monitor. A zoo emits a variety of animal sounds: an elephant trumpeting, a big cat roaring. A downtown building labeled Internal Revenue Service is on fire, drawing a crowd of miniature gawkers. There are more classic autos here than three good-sized car shows, and plenty of neon signage.

A ballpark at the center of the city scene is lit with old-school floodlights. It features fireworks with sound effects. “Some people miss it,” said Josh Baakko, who oversees the exhibit. Baakko said he got his job managing the exhibit for the new owners by finding a notice on Reddit.

The exhibit features tongue-in-cheek names on the businesses such as DeKays Dental Supply and C.F. Eye Care. There are also a few inside references that only Southern Californians would recognize. One building is labeled as the KCBQ radio station. It carries a billboard showing Top 40 personality and model train enthusiast “Shotgun Tom” Kelly.

Lizerbram was born in the 1970s, grew up in North County and shared the model railroad hobby with his father.

He said he likes the pre-video-game aspect of the exhibit. The exhibit hearkens back to a time when people used materials at hand for their toys and hobbies.

“You’ve got to put your phone down in order to appreciate it,” he said.