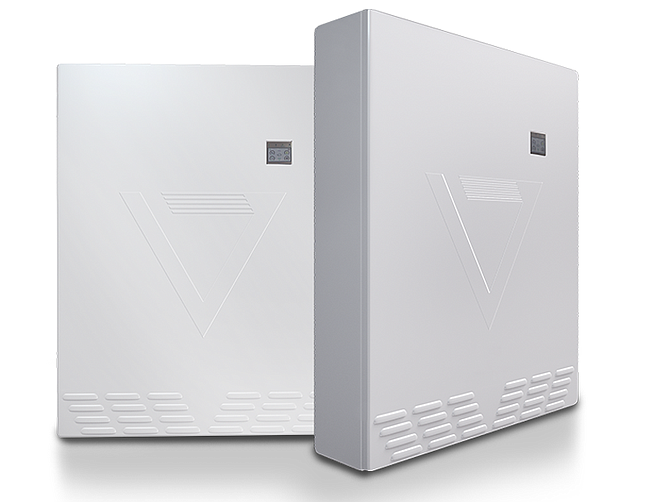 Photo courtesy of NeoVolta. NeoVolta’s batteries are in a cabinet that can be stored inside or outside.

The market for battery storage to capture energy generated by rooftop solar systems is poised to take off, and a Poway-based company is among the businesses hoping to take advantage of that boom.

“The storage market is absolutely about to explode. It’s only a question of when,” said Brad Heavner, policy director with the California Solar & Storage Association, (CSSA) a Sacramento-based industry group for the solar and energy storage sectors.

NeoVolta Inc., which raised $3.5 million through an initial public stock offering in May, has designed and launched production of a battery storage system based on proprietary technology. Sales and installations of NeoVolta battery systems began in June, and the company expects to ramp up production in the new year to meet customer demand.

In December, CSSA celebrated the installation of the one-millionth rooftop solar system in California at a high school in Clovis, near Fresno. On hand were former governors Arnold Schwarzenegger and Jerry Brown, both of whom had a role in supporting polices that helped achieve the goal. Of the total, 970,000 systems have been installed on homes, with the rest on businesses, farms and government buildings.

Battery storage has a way to go to catch up with solar; according to Heavner; as of April 2019, there were about 6,000 battery systems installed in homes in California, and 800 systems installed at businesses. He said many more were in the pipeline to be installed.

Brent Willson, a retired Marine colonel and CEO of NeoVolta, sees several trends that he expects will lead to increased sales of battery systems in Southern California, his company’s target market. For starters, said Willson, the cost of solar has come down over the past decade, and coupled with higher energy prices from the state’s utilities, more homeowners are opting to install solar on their rooftops.

Another factor, he said, is reliability. Residents who depend on medical devices such as battery-operated wheelchairs don’t want to be caught without power when utilities shut down the grid due to wildfire risks, an occurrence that made headlines across the state in 2019. Such outages create widespread disruption, he said.

“That’s kind of a game changer. That puts everybody out of business,” said Willson.

Willson said solar energy systems are programmed to shut off if a power outage occurs, for safety reasons. However, if a home has battery storage, the system automatically disconnects from the power grid and the solar panels can continue to generate electricity.

Helping With the Bills

Battery storage also can insulate homeowners from higher utility bills due to “time of use” pricing plans recently instituted by utilities, including SDG&E, in which higher rates are charged for electricity used between the hours of 4 p.m. and 9 p.m., Willson said.

Battery storage may not power every device, such as air conditioners or pool pumps, said Willson, but it will run most of the important items, such as medical equipment, refrigerators, computers, lights and televisions.

“Energy storage can probably keep you at the 80 percent level and that’s a whole lot better than zero,” he said.

Willson began researching battery storage systems after retiring from the Marine Corps in 2017 following a 31-year military career. Willson served as a helicopter pilot in the Marines, and later he oversaw procurement of helicopters and other aircraft for the military. While stationed in Hawaii, he also was tasked with installing solar and battery storage at two bases to provide greater energy reliability.

In the course of his research after leaving the Marines, he determined that Sonnen, a German manufacturer, made a superior battery system, with a high sticker price. Tesla, on the other hand, had a good system that was more competitively priced.

In 2018, NeoVolta incorporated, and raised $1.5 million in seed funding. Willson said he set out to design a system with Sonnen’s quality and Tesla’s price.

The system his team came up with, said Willson, uses lithium iron phosphate batteries, which pose no fire risk. The NeoVolta system stores 14.4 kilowatts of power, which can run an average-sized home overnight, Willson said, and costs about $14,000 installed. In January, NeoVolta will offer a larger, 24-kilowatt system for larger homes that need more power. The batteries are enclosed in a cabinet that can be installed indoors or outdoors.

“The price per kilowatt beats all my competition hands down, it’s not even close,” Willson said.

Homeowners and businesses that install solar and/or battery storage can get additional cost savings through a federal tax credit of 26 percent in 2020, as well as a state rebate — the Self-Generation Incentive Program, run by the California Public Utilities Commission - that will cover about one-fourth of the cost of battery storage, said Heavner of CSSA.

While the rebate fund for residential battery storage is currently exhausted, the state has approved new funding, and the rebates are expected to resume soon, Heavner said,

He gave the product high marks for both technology and price, and said he also likes dealing with a local company.

Breaux said battery storage is in its infancy, similar to where solar energy was 15 or 20 years ago. He expects more Californians to add battery storage to their solar energy system, or install new solar-battery combination systems, to provide better energy reliability and save money on energy costs.

“As it becomes more understood, I think homeowners will like what the battery system can provide for them,” Breaux said.

NeoVolta is prepared for rapid growth, according to Willson. The company was selling 50 battery systems per month, which he anticipates could grow to 500 per month by the beginning of the second quarter of 2020.

Contracting for Engineering And Manufacturing

NeoVolta contracts with another San Diego company, Connect PV, for engineering and manufacturing, which allows NeoVolta to keep its overhead down and its local workforce lean, said Willson. As a wholesaler, NeoVolta sells to solar installation companies, so it doesn’t have an in-house installation team.